by Gino Fanelli and Jeremy Moule

The override, which was conducted within 15 minutes of a special meeting of the Legislature being called, was not unexpected.

Legislators approved the amendments with the budget on Tuesday, and passed them mostly along party lines with a solid enough cushion to cancel out any threat of a veto. They voted 20-9 on the changes, with five breakaway Democrats siding with the 15 members of the Republican majority.

A frustrated Bello, who took office this year with a pledge of bipartisanship, said in a statement following the override that it "represents the old way of operating county government."

"This is just the latest example of the County Legislature prioritizing their power and political games over the residents of Monroe County," his statement read.

One of the amendments would create a $2.5 million “community contingency fund” over which the Republican-controlled Legislature would have almost total discretion. Critics of the fund, namely nine Democratic legislators who voted against its creation, have called it an election-year “slush fund.” All 29 seats in the Legislature are on the ballot in 2021.

During a news conference prior to the override vote, Bello said that Republican leaders and leaders of the breakaway Black and Asian Democratic Caucus last week presented him with a demand to create the $2.5 million fund. He said the leaders gave him an ultimatum: choose where the money would come from or they would choose for him.

"They used bipartisanship and cooperation as a cover for what amounted to political posturing heading into a re-election year, creating a $2.5 million Legislature contingency fund that will be used as nothing more than a slush fund for their own pet projects," Bello said.

Leaders of the two caucuses followed up with their own news conference, at which  Legislature President Joe Carbone accused Bello of distorting what happened. Carbone said that Bello requested a meeting last week with him and Republican Majority Leader Steve Brew in attempt to secure unanimous approval of his budget. He added that during the meeting Bello agreed to the fund and offered to construct the budget amendment.

"The Community Contingency Fund amendment was in no way, shape, or form forced onto County Executive Adam Bello," Carbone said. "The only person that made demands in that meeting was Adam Bello."

The other amendment would reverse the elimination of two positions at the Board of Elections proposed by the Democratic Elections Commissioner Jackie Ortiz.

Hours before the veto and subsequent override, Ortiz said she would refuse to abide by the amendment and go to court if necessary.

Democratic leadership at the elections board has been the subject of prolonged dispute among Legislature Democrats.

The breakaway Democrats who voted for the amendment to restore the positions have called on Ortiz to resign and accused her of racial bias because the two positions she intends to cut are held by Black women. Carbone said Republicans supported the amendment for that reason. 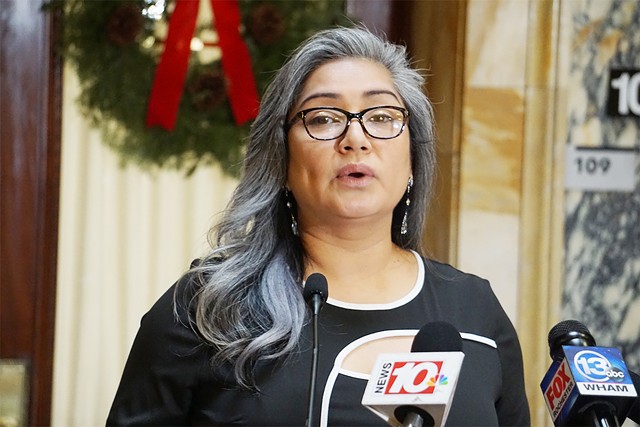 "It is clear based upon Ms. Ortiz’s actions that she is unfit to lead the Democratic Board of Elections," read a letter from the Black and Asian Democratic Caucus calling for her removal. "Her targeted actions toward Black employees in the Board of Elections call into question her ability to protect the rights of Black voters in Monroe County."

A visibly charged up Ortiz rebuked the allegations at a news conference at the County Office Building, and chastised members of the caucus for framing the staffing moves around race.

"Race was not a factor in this decision, and it is abhorrent to create division with this rhetoric," Ortiz said.

A former Rochester City Councilmember who was appointed Democratic elections commissioner in August after months of party infighting, Ortiz argued that the Legislature has no standing to make staffing decisions for the Board of Elections. When it comes to operations at the board, she said, the Legislature is limited to determining the board’s budget.

Ortiz said she will move forward with her staffing plan, regardless of the amendment.

"The state's statute with support from case law clearly provides election commissioners sole discretion of operations and personnel decisions at the Board of Elections, not legislators," Ortiz said.

She added that she would be willing to litigate the matter if legislators pressed her to comply.

"That amendment that was put forth was not legal, therefore, it is not in play for us," Ortiz said. "What we submitted as part of the budget, which was approved, is what we'll be moving forward with. If others take issue with that, they can proceed with their own legal necessities."

In his veto message to the Legislature, Bello echoed Ortiz's argument that the Board of Elections amendment was illegal.

He backed up Ortiz and her deputy, Natalie Sheppard, saying, "I trust their judgement on what they need."