Being neighborly in uncertain times

by Jeremy Moule and Gino Fanelli

March 25, 2020
Dina Giovanelli was recently waiting for her husband to jump start his truck when she had a realization: with in-person classes suspended at Monroe Community College, where she’s a professor, a lot of the school’s students would suddenly face some very serious needs.

On campus, students have access to mental health services, sanitary products and prophylactics, such as condoms, and food. Many students on financial aid have food plans. 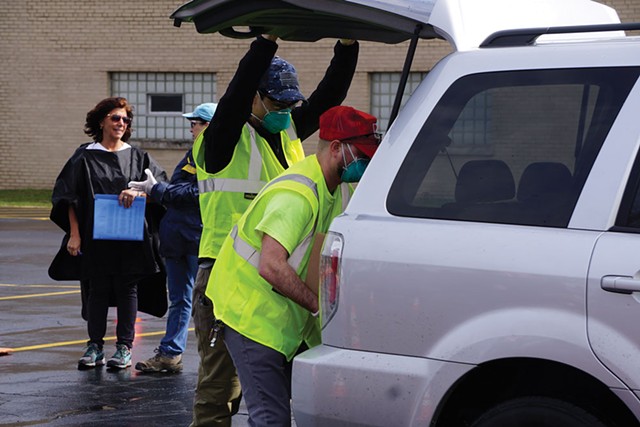 “I started to become really concerned about what our educational institution provides for them, Giovanelli said. “Many of them come to school not only to learn, but it’s a respite.”

From that concern grew the “Hey Rochester, NY! What do you need? What do you got?” Facebook group, which she started on March 13 and which has since surpassed 6,000 members. The page is meant to serve as a hub where people who need specific items can connect with people that have them and make an exchange.

Giovanelli is one of countless Americans stepping up to help out neighbors whose lives and livelihoods have been disrupted by the coronavirus pandemic. Students are out of school, which for some means lost access to safety-net services. People are out of jobs. And grocery store shelves are picked over, leaving some people unable to get essential items including disinfecting cleaning products, baby formula, and nonperishable food.

Larger nonprofits like Foodlink are working with numerous organizations to get food to people who need it. Many of them, such as the Irondequoit Community Cupboard, are grassroots operations with strong connections to their neighbors.

But the coronavirus crisis has also given rise to community-based mutual aid groups, organized by handfuls of concerned neighbors with the sole purpose of helping people meet their needs. The groups recognize that despite their best efforts, government and nonprofits can’t — or won’t — meet everyone’s needs during this public health crisis.

Giovanelli said she started “What do you need? What do you got?” knowing that the coronavirus crisis would hit marginalized and vulnerable groups of people hardest, such as the poor, the elderly, and the immunocompromised.

“Can’t find something you need? Ask,” reads the description on its Facebook page. “Have something to share? Offer. There is no problem offering to buy for cost. Maybe someone finds what you need while they are out? Price gouging is an automatic ban.”

The idea is to promote person-to person-interaction, though with ample social distancing precautions, Giovanelli said. Porch pick-ups and drop-offs are preferred.

The effort is working. The group has helped get groceries and disinfecting cleaners to elderly and immunocompromised people whose doctors have advised them to stay out of public places, including grocery and drug stores. It’s helped parents track down hard-to-find baby formula and other supplies. It’s also helped people get staple items that they haven’t been able to find in grocery stores.

“There’s a woman in the group who bought — she owns a cleaning company and she got a pallet of toilet paper and was selling a half a case at a time to individuals for cost, which was incredibly generous,” Giovanelli said.

Many people in Rochester were already struggling with housing and food insecurity before the coronavirus came here, said Jai Titus, one of the founding members of COVID-19 Rochester New York Food Relief. Titus said the mutual aid group, which operates through a Facebook page and through word of mouth, came together last week as “a response to the inevitable need that we knew would happen.”

There are two other core members in addition to Titus: Christa Seary and Ilhan Ali.

As the name implies, the trio’s main focus is making sure people who need food have it. But when individuals, families, or social workers reach out, the group will help with whatever they can.

“We just basically ask them what the need is and that can range from anything to ‘I need diapers and pampers and wipes’ to ‘I need gluten-free bread and lactose-free milk for my child,’” Titus said. “We go through every single, individual family, gather their needs, and use the resources that we have to fulfill them to the best of our ability.”

The group relies on donations of money, food (preferably prepackaged), and other items.

To help lessen the chance that they’ll spread the coronavirus, group members limit the number of people touching items, and anyone who handles them wears gloves. Volunteer drivers pick up items and deliver them to households that need them, often through porch-drops.

Nearing the end of the group’s first week, it had helped 25 families, accounting for 89 people, Titus said. Most of them were black and brown families, including single-parent households, young people, and the elderly, she added.

Community organizers Hannah Brown and Ian Layton wanted to encourage people to check in with neighbors and organize the residents of their blocks to support each other. To that end, they developed a simple form, which is now being distributed through the “COVID-19 Rochester New York Food Relief” and the “What do you need? What do you got?” Facebook groups.

The form is meant to help people build mutual aid networks on their own blocks. There’s a place for people to note if they need assistance with getting groceries and medication, and another space where neighbors with vehicles can volunteer to run errands or even help out in medical emergencies. The document also has basic facts about COVID-19.

“This is basically just a tool so that people could connect with the people that are very close to them right there on their street,” Brown said.

Food access remains a foremost concern for many in the community.

This past Friday, Foodlink partnered with the Irondequoit Community Cupboard for an emergency food distribution at Irondequoit Town Hall. Volunteers, alongside public officials, distributed 300 boxes of packaged food, each weighing 50 pounds and designed to feed a family of four for a week to 10 days. Almost all of the boxes had been claimed the night before, said Debbie Evans, founder and executive director of the Irondequoit Community Cupboard.

Foodlink is in the first wave of its coronavirus response, through which it plans to distribute 10,000 of the 50-pound boxes of food to residents in the non-profit’s 10-county footprint.

Even before the coronavirus epidemic, food insecurity was a problem across the region. According to Feeding America’s 2017 Map the Meal Gap study, 12.4 percent of Monroe County residents lived in food-insecure households; that’s 92,790 people.

“We always have high demand for emergency food support, we have a lot of food insecure individuals and they remain our highest priority,” said Foodlink Chief Executive Officer Julia Tedesco. “Those are people that are most vulnerable right now, including seniors and low-income households.”

Evans said that with the uncertainty of how long the pandemic will go on, the Irondequoit Community Cupboard is working as hard as possible just to keep up with demand.

Prior to coronavirus, Evans had just stocked three weeks’ worth of food for the “Backpack Program,” aimed at providing breakfast and lunch for school children. That food is now helping to fill the gap caused by coronavirus.

“The community has just been amazing, we get about 85 percent of our donations from the community,” Evans said. “I think we’re going to be okay for a little while, at least. As long as I have food and I don’t get sick, we’ll get ya.” 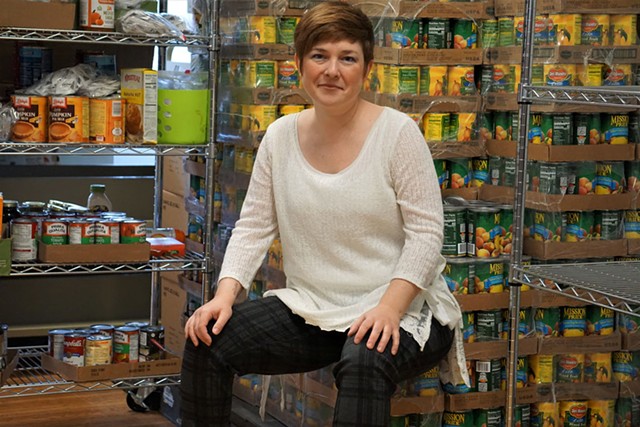 In a message on the Community Cupboard’s page, Evans tells people that if they are elderly, immunocompromised, or at risk from other health conditions, she will deliver food to them.

Since the coronavirus outbreak hit Monroe County, the South Wedge Food Program has lost about half its volunteers and experienced a 60 percent increase in demand, said the Rev. Katie Jo Suddaby, the pantry’s director. It typically serves about 200 families per month.

“Before the crisis, we were up by about a third because the government has been cutting people’s food stamps,” Suddaby said. “We were already preparing for that, and now it’s almost doubled.”

The South Wedge Food Program gets 90 percent of its supplies from Foodlink, with another 10 percent coming from church donations, a supply which has also dried up during the epidemic, Suddaby said.

Suddaby and the South Wedge Food Program are determined to continue serving families in need, but a shortfall is likely in the coming months. In response, Suddaby is looking to the community to find new ways of distributing food. She’s asking for donations from people who may have overstocked their homes leading up to the epidemic.

“There is enough food in Monroe County to feed everyone, but it just may be in houses that have too much and not in houses that don’t have enough,” Suddaby said. “We’re going to keep doing what we do until we don’t have the supplies to do it anymore.”