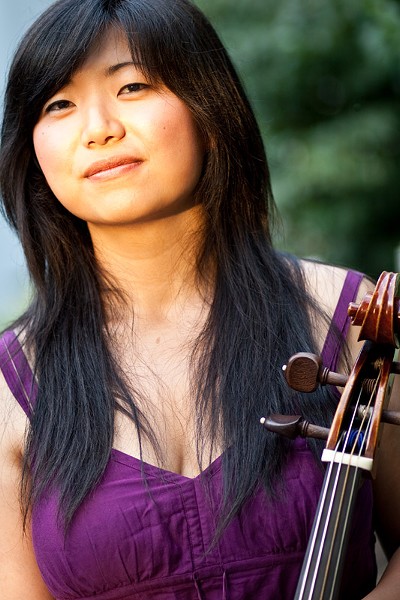 PHOTO PROVIDED Cellist Beiliang Zhu has made her name as a keen interpreter of Baroque music.

To be a young cellist praised by The New York Times as "particularly exciting" and by The New Yorker as "stylishly wild" while still a student is exceptional. It's even more exceptional when you are making your name by performing Bach and other Baroque composers on a period instrument.

Beiliang Zhu, a doctoral student at the Eastman School of Music and a rising star in the early music world, joins Publick Musick this week for the group's opening concert of the season, "Cello-bration!" It takes place this Friday at St. Paul's Lutheran Church in Pittsford and Saturday at Lutheran Church of the Incarnate Word in Rochester.

Zhu's awareness of Baroque music dates from when she was about 10 years old, and heard a piece of music she liked on a television program. Calling the station, she was told it was by Georg Philipp Telemann. As a young cellist, she came to love the music of the era, but she admits she knew little about performing it until she came to Eastman and studied with Christel Thielmann, a noted performer on the viola da gamba, the cello's ancestor.

"But as a freshman," Zhu says, "I just couldn't understand the music, and wasn't good at it." The elusive element was the role of rhetoric: phrasing and inflecting music in what she calls "a speaking way, or like instrumental 'singing.'" A key point in approaching Baroque music, it involves "translating" the specific emotions in the music into notes and physical gestures.

By the time Zhu was a senior at Eastman, she understood the genre, and she also learned more about the physical distinctions of the Baroque cello. These differences include use of gut strings instead of metal ones, as well as not using an end pin, which extrudes from the bottom of a modern cello and holds it steady.

When Zhu went to Juilliard for graduate study, she was able, as she puts it, "to be totally immersed in Baroque music." This immersion led her back to Eastman, for further study with one of the masters of the style, the lutenist Paul O'Dette.

"My playing became more alert and confident," Zhu says. "Paul's teaching is to learn all the rules in any style of music, before you break them. The most inspiring musicians are the ones who have mastered technique, but who also know when to use what they know."

In 2012, Zhu entered the Leipzig Bach Competition and won its cello performance prize - the first cellist to do so playing a period instrument. The prize raised her profile in the music world, which led to engagements with the Boston Early Music Festival, William Christie, Masaaki Suzuki, and other stellar names in the period-performance world.

Zhu describes this weekend's concert, in which she'll share cello duties with Publick Musick Co-Artistic Director Christopher Haritatos, as "very hard to generalize." The program presents composers from the early 17th to the late 18th centuries: familiar names (to early music lovers, at least) like Girolamo Frescobaldi and Francesco Geminiani, and unfamiliar ones, like Jean-Baptiste Bréval, a late-18th century French cellist. They represent an enormous swath of music history, in which composition styles changed a great deal.

"It's comparable to the way that pop music has changed within a half-century or more," Zhu says. "You can sense many small changes in styles as time passes, and eventually they add up to a generational change."

How does that translate to chamber music? Zhu lists a few examples. "As you progress from 17th to 18th centuries, there are differences in how you ornament," she says, referring to the unwritten flourishes that the performers add to the sometimes sparse notes on the page. "Also, the tonal system developed and became more complex, so the harmonies you would use in certain passages changed."

Most of the music is written for solo cello - or occasionally two cellos, perhaps with violin - and harpsichord accompaniment. It is intimate and graceful, with a hierarchy of orchestration firmly in place between the solo instrument and the continuo, comprised of the keyboard and bass instruments As Zhu puts it, "The top part shows off, but the lower parts articulate the structure and the harmony."

The idea of a cello virtuoso barely existed until the late 18th century, so the instrument usually took a modest place in chamber music. "The cello generally does not have a flashy part," Zhu says. "It is usually an accompaniment instrument, and the music is based on a close interaction among the performers. To me, this music has a refreshing feeling. It doesn't bombard the ear. It's like friends talking to each other."

In addition to doctoral studies at Eastman, Zhu is also pursuing a master's degree in ethnomusicology. Performance is involved here too, with the school's gamelan, a Balinese percussion orchestra whose members memorize all their music.

The clangorous sounds of a gamelan don't sound too much like Baroque music, but Zhu does see a connection with playing continuo. "In both cases I need to be constantly paying attention to what's going on, to have the full scope of the performance in mind and my function in it."

Playing in the gamelan has also added to her conviction that "music is a living art, and it only comes alive through performance."