Becca reviews 'Within the Quota' and 'You're Being Watched'

September 20, 2017
Settle in, because I have some thoughts and feelings about my Tuesday night at Fringe.

I’ve reviewed TableTopOpera’s highly topical productions for the last two years of Rochester Fringe Festivals: In 2015 the group presented an excellently thorough and sensitive program on child mortality, and in 2016 it produced an equally well-done commemoration of the 100th anniversary of the Battle of the Somme.

So I was eager to swoop on this year’s presentation, “Within the Quota” (this time held at the Eastman Museum’s Dryden Theatre), which tackles the timely theme of immigration, with consideration for the reasons people leave home, the laws which halt or slow the flow of immigration, and the government-sanctioned racism and xenophobia that immigrants face.

As with the past productions, TableTopOpera wove a narrative using topical music and archival and contemporary imagery, beginning with historic connections to the theme, but showing non-resolution through current connections. Our core battles with borders, identity, and compassion rage on.

“Within the Quota” begins with an exploration of America’s troubling history of exclusionary immigration policies, which worked in tandem with its history of white supremacy and efforts toward eugenics. A long list of “undesirables” — those engaged in various alleged deviancies and possessing alleged deficiencies — were among the first to be shut out, as were people from Asian countries and regions that bless the inhabitants with more melanin.

Throughout the show, Eastman-associated musicians played Cole Porter’s pro-immigration ballet “Within the Quota,” which was created as a critical response to the 1921 Emergency Quota Act. The compositions — played with organ, piano, saxophone, trombone, cello, and trumpet — alternate between tunes that sounded Eastern European, vaudevillian, and swingy stuff from early jazz. Projected text told of hardships faced on the journey and after arrival for those who gained entrance.

The show also told of instances where the immigration quota had been filled, and ships full of people seeking sanctuary were turned around. It cites one infamous instance: The SS St. Louis traveled across the Atlantic in May 1939, carrying 907 Jewish refugees. When they were barred from entering both Cuba and America, the ship returned to Antwerp, and it’s estimated that around 250 of its passengers later perished in Nazi work camps.

This instance has been cited before as a chilling reminder that the decisions we make in current refugee situations have a tragic impact that will echo shamefully into the future. We’re constructing history with every choice, all of the time.

Here and there the program injected clips from silent or narrated archival films that related to the topic. Milton S. Eisenhower explains how after Pearl Harbor the US questioned the status of naturalized citizens and enacted the Japanese internment camps. A home movie made in one of the camps reveals the conditions people lived in for years. (And a smart jab by the narrator who shot the film points out that while the government contractors were given $300 million to build the handful of barracks, it can’t have cost that much — just look at them. The subtext is: Where did that money go to?)

In other film clips, white wealth and white immigrant privilege is flaunted in the face of a rapidly emerging second class citizenship; this group also extends from immigrants to seize the “free” sons and daughters of slaves. Images of lynchings flash across the screens, with the mutilated bodies blurred out while the sea of white spectators, sickeningly reveling in horror, are clear as daylight. Some of those in attendance are alive today.

Racism rears as a ravenous, multi-headed beast in policy and action, then white people proceed to pretend the beast is slain, when it healthily endures — dormant at best, and resentful of having to hunker down in the shadows.

The program sheds light on the ways the US has gone on to take advantage of the vulnerable, and spends some time exploring the Braceros program that brought in needed migrant workers from south of the border, only to conduct mass deportations when we were done with them. This tactic endures to this day. During this space of the show, the notes lilting from the piano sounded vaguely like Nine Inch Nails’ “Something I Can Never Have.”

From here, the show moves into modern issues, projecting numbers (from January through June ICE arrested more than 75,000 people) and recounting policies the current administration has attempted to push through regarding the Muslim ban and repeal of DACA.

Enduring xenophobia and racism are represented in portraits of people holding protest signs and pictures from the Unite the Right rally in Charlottesville, capped off with the everlastingly jarring photo of James Fields Jr.’s car plowing into a crowd of anti-racist protesters, which resulted in the murder of Heather Heyer.

TableTopOpera leaves us on a note of hope with a series of images of people being sworn in as new citizens, beaming and bearing the stars and stripes.

"Within the Quota" will be not performed again during Fringe 2017, but you can find more abut TableTopOpera at tabletopopera.com. 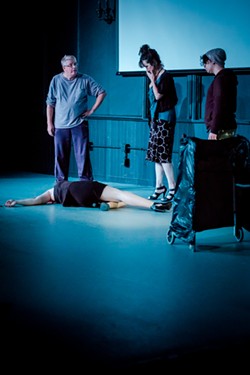 A talk back with an immigration lawyer and workers’ rights advocate was scheduled for after the production, but being that I had to bike my butt off to the next show I was covering, I missed it. So I’m deeply interested in hearing thoughts or a recap from anyone who stayed.

I ended my evening at MuCCC for illustrator and author Chuck Harrison’s “You’re Being Watched,” a series of three original one-act plays. Harrison is talented and prolific in his work, but he’s also a wonderful conversationalist — the kind of person you’re always stoked to run into and engage in sarcasm-riddled chatter with for an unexpected span of time. And turns out, he’s a damn good playwright, too.

The plays were hilariously scripted and acted by the small company of rotating players, striking a good approach of tackling disturbing topics with non-cloying levity. I am not gonna spoil these too badly because I really hope they get staged again and more people get to see them. Do it, Chuck & co., I'm begging ya.

The production opens with “Nowhere,” a rather bleak story about accidental death and what we’ll do to save our own skins. After Betty (a fierce Olivia Knowlden) has a vicious fight on the phone with her boyfriend, she’s struck by not one, but three cars, and killed. The scene where the drivers confront one another contains some extremely clever sound effects and props in lieu of having actual cars on stage.

Each of the three culpable people (Paul Scheib, Chris Toia, and Gretchen Woodworth) has a past or is in a state that leaves them vulnerable to punishment. Will they alert the authorities?

Next up “God’s Father, or: How to Draw Comics the Freelance Way,” about a freelance illustrator who’s just trying to make enough scratch to keep a roof over his head. This is without a doubt Harrison exorcising his demons of frustration. Tasked with a job he loathes, Jack (the absolute expert Jonathan Porter) moves the play along at a rapid clip with cuss-riddled, ranting soliloquies — paused only for a couple of phone calls, with his hot shot editor and then to banter with a bestie — to the voices in his head (the audience). The script is killer and clearly a cathartic cleanse for the author.

The show wrapped with “42 A.C.E.,” an incredibly clever projection of life in America after rebels lost a war with the “corporatists” — because they ran out of the weapons that the corporations make. The Reconstructed USA (RUSA) live in compounds underground, and this story focuses on one family who are engaged in learning the history of the 20-year war. Revelations abound and family alliances are challenged.

The whole conversation between family members as they help the youngest daughter with her history lesson is a smart storytelling tactic, and keeps the audience engaged while providing a backstory for the current circumstances.

Harrison’s script is rife with subtle jabs at corporations and where they are taking us, with a not so-subtle message: Resist.

“You’re Being Watched” will not be performed again during Fringe 2017.