Becca reviews 'Elephant Grass,' 'On the Verge,' and 'There is a Field'

Rochester Fringe 2017 for me began with a massively inspiring performance that felt like a love note to everyone in the audience. FuturPointe Dance's "Elephant Grass: An Afrofutur-Mystic Tale" is a femme-forward, “She-Ro” quest to shake off all that well-known negative shit and do the hard work of figuring out what you’re here to do. Spoiler alert: it’s lonely work.

The original performance — by FuturPointe co-founders N'Jelle Gage-Thorne and Guy Thorne — opens with six dancers arranged in a seated circle, their serpentine arms rising and falling, bodies swaying, and limbs projecting and shifting like synchronized swimmers. A sassy, infectiously self-assured reading of Maya Angelou’s “And Still I Rise” sets the tone for a series of solo and group pieces in which bodies speak of hardship but never buckle beneath it.

The sparsely set Fielding Stage at Geva was adorned with domestic accoutrements that subtly lent this sense of the earthy sacred: plants, vessels, cloth, candles, and drums. After some rather sparking instructions (“Ritual for a Safe Journey”) flashed on a backdrop screen, a solo performance saw a dancer make deliberate and proud movements under a full moon projection — she was restless and enthralling against a heated sax and urgent percussion, like when you’re hit with so much purpose you’re crawling out of your skin with what to do first and next.

A solo by the sole male dancer followed, his long and lithe form gilded in a gold bodysuit. His statuesque frame became a literal shining statue, his skin and the suit melding under the stage lights. This epiphany hit: melanin is not brown but varying shades of gold; sunlight distilled. His crackling energy snapped and popped and then relaxed into languid but controlled rolling of the shoulders and torso.

Whoa, and ohhhhh: dance as a solar-powered exorcism of everything that hits us, so we can shrug off the excess, so we can keep it moving.

After a lady-in-red hit the audience with her every gesture a booming projectile, her motion set to a club-electro-and-splashy-drums number, the confetti-like projection on the screen behind her resolved itself into a mask. Left with this maybe unfamiliar god to contemplate, the audience was eventually urged on with a greater cause for thought, as a whispering voice crackling with digital disturbances offered advice about the pain encountered when you’re on the right path.

This voice returns periodically to reinforce this message, upholding the confusing necessity of solitude for the community-oriented individual. In this silence the truth emerges, it says.

I’m not sure what the history of this message-in-a-bottle-from-the-universe work is, or if FuturPointe has plans to present it after Fringe, but I’m here for when and if that happens.

Slideshow Rochester Fringe 2017: On the Verge 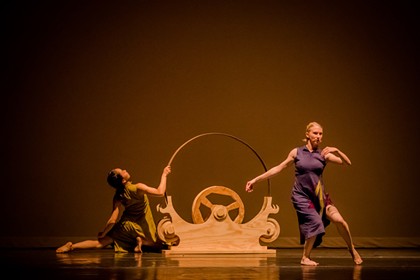 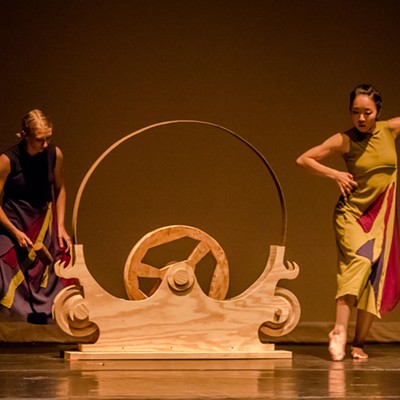 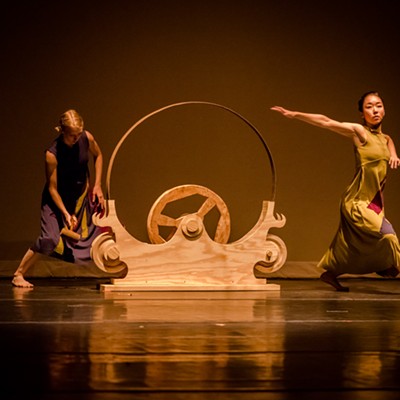 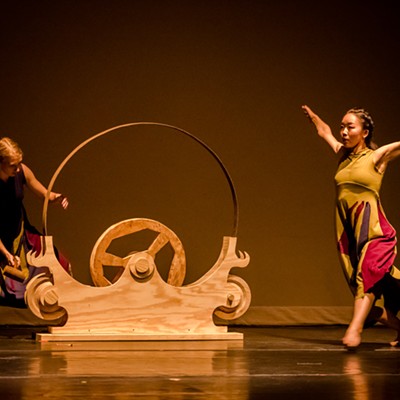 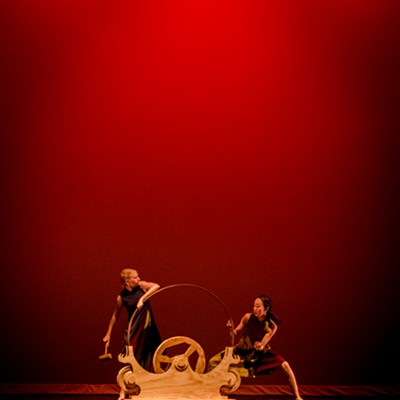 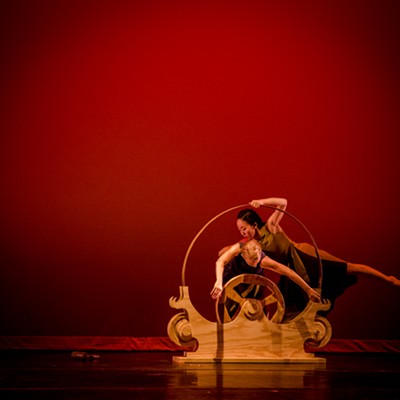 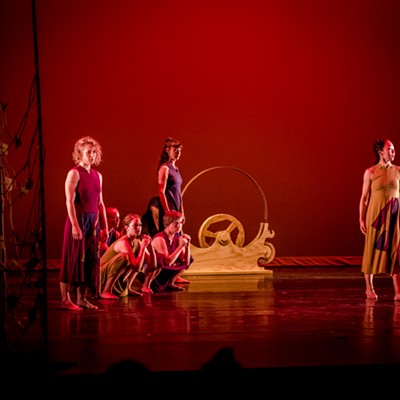 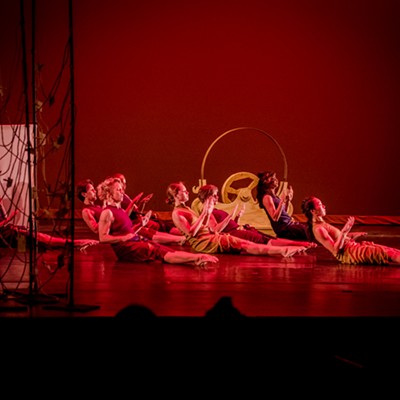 Rochester Fringe 2017: On the Verge
By Josh Saunders
Click to View 8 slides

Following FuturPointe’s performance I headed over to SOTA for “On the Verge of the Outermost Edge of US,” a multimedia dance performance presented by Rose Pasquarello Beauchamp in collaboration with other dancers, including Missy Pfohl Smith and Heather Roffe. This production’s tone was undeniably more somber than the unsinkable tenor of “Elephant Grass,” and despite the beautiful movements and music, it left me feeling a bit sunken.

Provided info states that Beauchamp’s impetus for the show is catharsis; it is a response to the disheartening divisions she sees in the world. The show is set up with the concept of isolation and confinement, and uses the imagery of a paper tent to sort of abstractly allude to refugee camps but also other partitions in human culture.

Off to the side of the stage, Paul Leary played a haunting woodwind over piano and woody-percussion notes controlled by his spinning of a few bicycle wheels attached to a fascinating apparatus. And periodically the voices of Pete Seeger, Leonard Cohen, and others floated over struggling gestures of the all-female dancers.

With a recurring theme of writing that’s conveyed in both spoken word and through scribbling gestures, the idea of defiance in the face of oppression is conveyed, but any hint of victory is left unresolved. Which ultimately felt more like a lamentation than the call to action that I wanted.

My evening wrapped at MuCCC with a staged reading of Jen Marlowe’s based-on-reality play, “There is a Field.” The premise of the story is that a young man is murdered by police at a protest. His sister, a medical student, seeks answers as her family and community grieve their loss. But the answers aren’t forthcoming, and each of the characters struggle in different ways with the concept of the futile pursuit of retribution, and if and how to engage in forgiveness.

Scraps of narration punctuate and pull together bits of live acting and flashbacks, as slowly the audience learns the story of a Palestinian Arab family living in what is now Israel. It’s important to phrase it that way, because the family did not move to Israel; they never left what was once Palestine. Through anecdotes of discrimination and conflict, the play conveys a strong picture of second-class citizenship.

Both the script and the way it is presented are important in a number of ways. The story presents the brother-sister relationship in a realistic rivalry-meets-undying-love kind of way, which feels very relatable across cultures and borders.

But crucially, the show is acted entirely by a black cast. Solidarity between black Americans and Palestinians makes a world of sense. The themes of massively imbalanced power structures, police and military brutality, and authorities investigating themselves to zero effect are all too familiar.

“There is a Field” will be not be performed again during Fringe (but I hope director Reuben J. Tapp will do a full staging of the show in the future). The show was presented as part of Witness Palestine Rochester, which includes a film festival and lineup of other important events.