Because they’ve got nothing else

The UV Rays play anywhere, anytime, for anyone 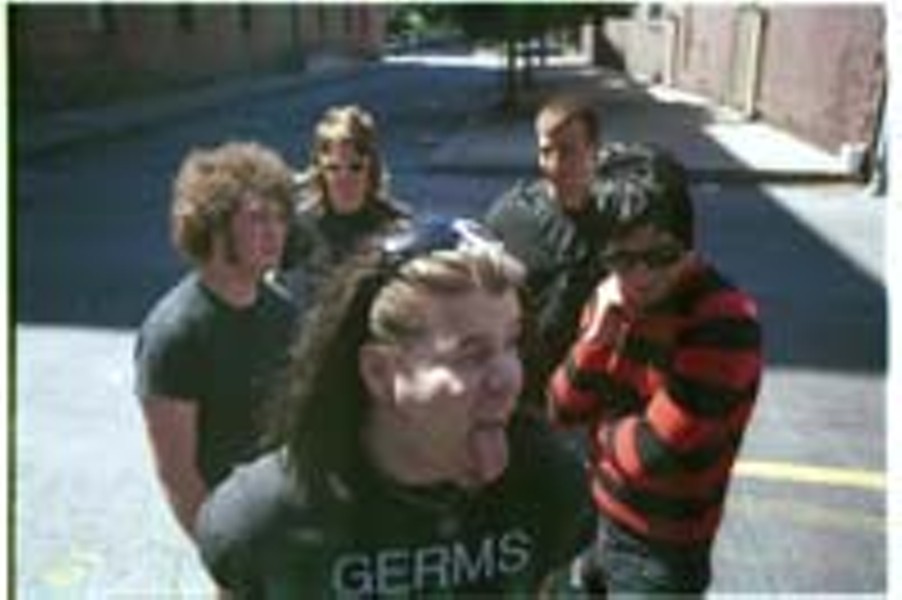 It's a Tuesday night at The Bug Jar and The UV Rays aren't even trying to be sneaky. They're sipping Pabst Blue Ribbon out of cans. The Bug Jar doesn't serve PBR in a can. But when you're a broke --- or a near-broke --- musician, you have to economize and improvise: BYOB.

The UV Rays have been lurking (and drinking cheap) around the Rochester underground for just about a year. They play loud, snotty, greasy rock music and they act just as loud, snotty, and greasy as they sound.

They look it, too.

They've played anywhere for anybody --- and nobody --- and for nothing. Since its launch, the band figures it's been paid a grand total of 12 bucks and a few random shots of Jägermeister (not including their most recent show, which netted the quintet a cool C-note). Wound excitedly tight, the band presses on, maniacally focused. They're lowdown and low-doughed, but they don't care. No, really.

"I don't think it's really that we're worried about that, about getting paid as much," says guitarist Pat Welch. "We just wanna play."

"The main objective is rock 'n' roll," says singer Kevin Wilcox. He says it with so much conviction that all other objectives suddenly seem somehow pointless.

The band's apparent disregard for pocket salad --- and safety on stage --- along with a broad and deep appreciation for real rock 'n' roll have rapidly turned The UV Rays into one of this town's most excitingly honest and real live rock acts.

Audiences get it. They believe because they can identify with the group in a punk-rock, blue-collar kind of way. You know, "One of us, one of us, we accept you, one of us."

"I think they [audiences] can tell that it's real," says GaragePop Records' Rob Filardo. "That they're not faking it." Filardo is putting out the band's upcoming releases. And he's a fan.

"I like their songs," he says. "I like the fact that they come from like, punk-rock hardcore roots, but they're growing up. It's more of a mature punk-rock sound."

When they're not on stage, the boys in the band are cheering on other groups like The Priests, Skate Korpse, The Thundergods, Colossus, Bludwulf, The Chesterfield Kings, or St. Phillip's Escalator. They're of the scene they entertain.

"They've opened up a kind of channel to get some of these punk-rock kids back in the flux," he says.

"Yeah, we've been in hardcore punk bands around town for probably 10-plus years," Wilcox says. "This band basically started because we were looking to make an old-school style punk band where I could actually sing and they could actually play guitars instead of just [makes a guttural machine-gun noise] super fast out-of-control stuff."

"With this band I want to get away from the whole teen angst and depression stuff and actually sing about having a good time," says drummer Dave Stutzman.

The band draws upon all aspects of rock 'n' roll --- just like a good band should.

"We all listen to so much different music," says bassist Todd Martin, the quietest and least insane of the group. "All early r&b and soul, early rock 'n' roll, and like all of the '60s psychedelic stuff, the '80s fucking hair metal stuff... it all comes out."

Despite its reverence for other music, the band's cocksure attitude prevails.

"I feel like we're the true spirit of rock 'n' roll," says Wilcox. "From Chuck Berry, from even before him, and all up through. We're just here to fucking rock. We're here to have a good time."

The tunes are fast and catchy, catchy, catchy. But the band plays with a musical subtlety in dynamics and arrangements not heard in a lot of punk bands, especially those barely a year old.

Rapone pounds on his guitar like Ali with the blur of his right hand, while his left hand doesn't seem to really move. A trebly dirge of crunch and chunk flies out of his amp. And though Wilcox is singing, his approach is frenetic, edgy, and urgent. The notes are merely screams in larval form.

On stage --- and off, usually --- the band is in constant motion. At times the whole operation looks like a demolition derby dancing to its own music. And the kids in the audience are dancing too, in a kind of double-jointed partner-less free-for-all.

But this doesn't always happen.

"Usually when I look out in the crowd, I'm like, 'You guys aren't feeling it,'" he says. "People are just standing there bobbing their heads."

People will gravitate to what they know. And through the band's heavy-duty work ethic --- will play anywhere, anytime, for anyone --- larger audiences are getting hipped to The UV Ray way. But as all bands on the rise (or descent, depending on your perspective), The UV Rays have had to cut their teeth on some hinky circumstances and jerkwater locales. Like Youngstown, Ohio, for instance, where a promoter (as promoters have been known to do) lured the band into a lousy gig.

"That was a disaster," Wilcox says. "There's a guy in Youngstown who sucks. He likes to blow a lot of smoke up a lot of people's asses and talk shit all the time."

"His claim to fame was his soundman filled in for one of The Dead Boys," says Stutzman.

Rapone chimes in: "No, it was The Damned."

The debate goes back and forth for a few minutes until Wilcox clarifies.

"It was The Lords Of The New Church which had The Damned and Dead Boys members in it."

"The guy told us on the phone that rock 'n' roll was huge out there and there's going to be a ton of people when we get there," says Rapone. "And when we got there he said, 'Aw you know, there's not a lot of kids around here.' He totally changed his story."

"The guy yelled at us for swearing on stage," Wilcox says. "He said 80 percent of the women left after I swore. Like The Dead Boys never fucking swore on stage."

The dude later pulled a gun (as promoters have been known to do) on four of the guys when they wouldn't stop teasing Martin.

Maybe you've seen The UV Rays on better nights when they've shared the bill with Murphy's Law, The Lyres, The Weirdos, and scores of their peers. Maybe you haven't. Maybe you'd better.

They have a 45 due any day now and an album in the can tentatively titled Evil Rock 'N' Roll or Night Of The Living Dudes. A small tour (that probably won't include Youngstown) is planned in November.

"We want to put out the record, send it out everywhere, hit the road," Wilcox says. "I just want to play forever, 'til something happens. And if it doesn't happen, I'll keep playing anyway."

"They don't know what they're doing," he says, "but I keep telling them, 'Keep doing it, you're doing the right thing.' I don't know how long it will last. After a while it may become like a job to them. But right now they just love what they do."

The UV Rays have all the quips and quotes and rock 'n' roll battle cries down cold. But it's Welch who sheds light on the genuine drive behind this band: They've really got nothing else.

The UV Rays walk tall and rock hard with no pretense.

"We're not trying to be anything," says Rapone. "I mean look at us. We're ugly, ugly guys. But when we play we're even uglier."

"But nevertheless," Wilcox says, "there're babes dancing at every show."