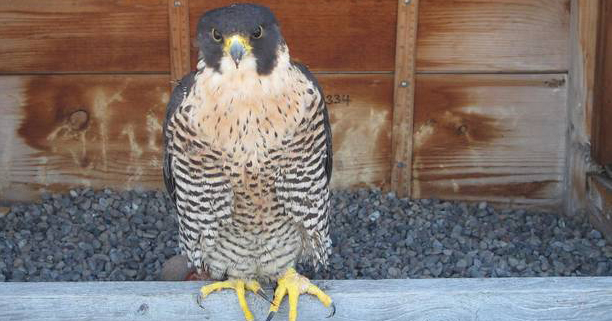 Beauty, the female peregrine falcon who for the better part of her 15-year life made her nest atop the Times Square Building in downtown Rochester, has died.

“Last night she laid down on the platform in front of the Powers nest box, by early morning, she died,” read a tweet from the Rfalconcam account.

The cause of her death has not been determined.

But nature is both beautiful and harsh.

Peregrine falcons prize their nesting spots and fiercely defend their territory, usually an area of about five square miles. Beauty’s death created an opening, and by the end of Tuesday morning a new, unbanded female falcon was making designs on a nesting box atop the Times Square Building, according to the Rfalconcam website.

Observers have also spotted two tiercels — the fancy name for male peregrine falcons — around downtown, and they’ve had a couple of fights.

Heck, the birds can reach diving speeds of 240 mph.

Beauty was hatched in 2007 at Pittsburgh Cathedral of Learning, according to Rfalconcam.com. By 2009, she’d taken a mate, Archer, and moved into Rochester — the pair first made a nest on the former Midtown Plaza tower, though it’s believed Beauty’s eggs did not hatch.

That year, they also began an ultimately successful campaign to force Mariah, the falcon who’d nested at a box on the Kodak building since 1998, from her territory. In 2008, the Kodak box was moved to the Powers Building and a new box was built on the Times Square Building.

In 2010, Beauty and Archer took up residence at the Times Square Building. In 2012, Archer’s legs were injured and he was forced from the territory. Beauty was injured during a territory battle — by a falcon that turned out to be her niece — but recovered and took up with a new male, who became known as Dot.ca. Through 2021, Beauty hatched 33 falcons. Mariah, by comparison, hatched 43 during her years at Kodak.

Observers hadn’t spotted Dot.ca since January, and one of the new males lured Beauty over to the Powers Building box. On Monday night, observers noted that she was acting strangely and ultimately that she had died.

So why all the fuss over a bird? Peregrine falcons are found across the Northern Hemisphere, but in the United States, they are an endangered species. By the 1970s, they had been wiped out across the Northeast because of DDT, the same toxic pesticide that caused bald eagle, red-tailed hawk, and other raptor populations to plummet.

But by the 1980s, efforts were underway to reintroduce those species, including peregrines, in the Northeast. Partners in Flight, a bird conservation organization, has estimated the present-day global breeding population to be around 140,000.

“Our falcons have helped to enlarge the population of peregrine falcons,” Summers said, adding that another mating pair could emerge by the end of summer.

Beth Adams, a reporter for WXXI News, contributed to this story.