November 07, 2017
Countywide, voter turnout was higher than it was in the 2013 and 2009 elections, which also had mayoral, City Council, and suburban races. As of 8:30 p.m., 34 percent of registered voters had gone to the polls; that figure was 31 percent in 2013 and 29 percent in 2009.
Monroe County Democrats had a good night: they took the sheriff’s office, they picked up a County Legislature seat, and they won a smattering of town seats.

Some progressives griped about the party establishment’s embrace of Baxter, who voted for Trump and whose positions on critical issues like LGBTQ rights and gun control were never clear, the critics say. 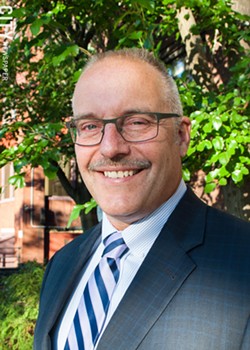 Gary Pudup, who retired from the sheriff’s office and is a former director of the local New York Civil Liberties Union chapter, ran a write-in campaign to offer Democrats and alternative to Baxter. The Board of Elections isn’t yet saying how many votes he pulled in, but write-ins for the sheriff’s race made up around three-quarters of a percent of the race’s totals.

In the 10th Legislative District race, Democrat Howard Maffucci, the former East Rochester school district superintendent, beat out Republican Jason Rosenberg, an entrepreneur and University of Rochester manager. The candidates were competing for an open seat; the incumbent, Republican Anthony Daniele, has to leave at the end of the year because of term limits. Maffucci will be the eleventh Democrat in the Lej, but there are still 18 Republicans.

Democrats had some major victories in the suburbs, too. In Henrietta, Democrat Stephen Schultz unseated embattled Republican Supervisor Jack Moore. Schultz pulled in 58 percent of the vote to Moore’s 40 percent; Bright Future candidate Jeffrey Kueppers received 2 percent of the votes.

Democrats Rob Barley and Michael Stafford also won two seats on the Town Board previously held by Republicans. Both of the seats were open, since the incumbents decided not to seek reelection. Barley and Stafford defeated Republicans John Howland – a county legislator – and Kristine Demo-Vazquez.

In other suburban races:

In the City of Rochester, there were no surprises, not in the race for mayor, the five at-large seats on City Council, or the school board. The winners of the Democratic Party's September primary were the winners of all the races in today's general election.

Mayor Lovely Warren easily won re-election, defeating her three challengers, Republican-Conservative-Reform candidate Tony Micciche, Green Party candidate Alex White, and independent candidate Lori Thomas. (County Legislator Jim Sheppard, whom Warren defeated in the Democratic Primary, was on the ballot on the Working Families and Independence lines but did not campaign; nonetheless, he received over 10 percent of the vote.)

Warren's win was expected, since Democrats so dominate the voter registration that Rochester hasn't elected a single Republican as mayor since changing to a "strong mayor" system in 1985. And her solid win in the primary against Sheppard and former television reporter Rachel Barnhart virtually assured that she would win in the general election.

For school board, the winners were incumbents Van White, the current board president, and Cynthia Elliott, and newcomer Natalie Sheppard. The fourth candidate was Beatriz LeBron, the only Latinx running for the board. Jose Cruz, the board's only current Latinx member, is retiring at the end of his term in December.

Today's election won't complete the selection of school board members, however. Current board member Malik Evans won a seat on City Council today. He's only half-way through his four-year term, so one of the new board's first jobs in January will be to appoint someone to fill his seat. LeBron could be considered for that seat.

Monroe County voters also said they want nothing to do with a constitutional convention.

Every 20 years, New York voters have a chance to say whether they want to hold a convention, during which delegates review the constitution and develop proposed amendments, which ultimately need voter approval.

Proponents said the convention would provide the best opportunity to enact ethics and election reforms. But a broad, loose coalition of groups argued against the ConCon, saying it jeopardized everything from wilderness protections to abortion rights to gun rights. The New York State Conservative Party argued it’d simply be a waste of money.

Approximately 80 percent of Monroe County voters rejected the convention. The proposition was headed for a similar fate statewide: roughly 75 percent of voters across New York filled in the "no" circle on their ballots,  a margin that remained consistent as precincts in all counties reported their totals.