Even if you're long past your back-to-school days, get into the spirit with a couple of provocative art shows, offered by two local academic institutions. Both shows are free to attend and open this week.

On Friday, September 4, 6 p.m. to 9 p.m., Gallery r will open Meredith Davenport's "Theater of War," a series of photographs of modern-day war reenactors. Rather than your typical Civil War enthusiasts, nostalgic for musket fire and marching to fife-and-drum, Davenport focuses on reenactors of current conflicts.

Armed with realistic-looking air guns, Davenport's subjects play games that are interpretations of news reports and veteran's experiences from contemporary clashes. Some are recent vets, themselves.

Davenport's oeuvre includes imagery of men posing as American soldiers pretending to hunt for Osama bin Laden, to kill Fidel Castro, or battle nonexistent Arabic-speaking tribes. These war games take place not overseas, but in the hills of northern Virginia, forests of southern Florida, and deserts outside of Los Angeles, the locations selected for their similarities with the real-world war terrain.

"How violence is digested through the news media and re-interpreted in online games is important to the work," Davenport says.

Some photographs nod to iconic images in the history of photojournalism — Davenport has 20 years of experience in the field — while others reference the original narratives that inspired the play. In one image, a young boy stands handcuffed in a dark basement (actually an abandoned wine cellar in Fresno), disturbingly alluding to torture in the Abu Ghraib Prison.

"Thinking about Jean Baudrillard's idea of simulation, I created another version of this work, a performance of the photograph of the young boy in the wine cellar," Davenport says. "I wanted to explore what would happen to the power of the Abu Ghraib image referenced in the photograph by adding another generation of simulation."

So, in an accompanying performance, "Kill House" — which took place in the Hunter Times Square Gallery in 2009 — a young soldier confronts viewers in the gallery space, handcuffed and hauntingly still, breathing and awaiting fate.

As part of the Fringe Festival, on September 25, 7:30 p.m. to 8:30 p.m., a free performance of "Kill House" will take place at Gallery r, along with a book signing of "Theater of War" (which contains interviews and essays by Jessica Catherine Lieberman and Esther MacCallum-Stewart and was published in the fall of 2014 by Intellect Press). 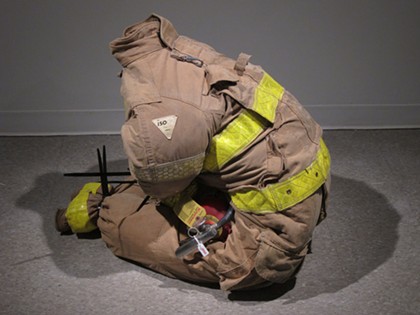 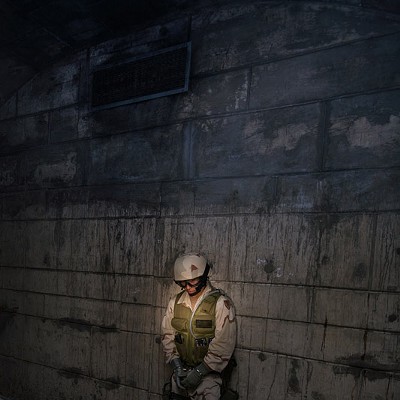 Just about everyone has something to say about the now-infamous city of Ferguson, Missouri, and its place in America's brutal history of race-based conflict. Artist Bryce Olen Robinson grew up in the community. In "From #Ferguson," an exhibit of Robinson's work that will open at the Hartnett Gallery on Thursday, September 3, the artist explores tension between Ferguson as place and Ferguson as a cultural construct.

Robinson works in a large-scale with diverse materials and is often driven by collaboration with varied communities, with an interest in using art as a catalyst for important discussion and action.

Works on the subject of Ferguson have included "Prime Beauty," a damaged sign resurrected from the riots and illuminated in the gallery setting (and paired with a photograph of the sign as found in the rubble, near graffiti saying, "AMERICA WAKE UP); "#Ferguson," a wall-mounted wooden cut out in the shape of a map of Ferguson, literally branded "by people who have never been there"; and "Freedom of Information Act," a documented performance piece in which Robinson sat in a lawn chair and read the United States Department of Justice's "Ferguson Report" to his childhood home.

Per provided information, new works included in this show are the result of Robinson's struggle "to understand and redress his own point of origin." The pieces will include a wide range of material approaches, including sculpture, drawing, video, and performance artifacts.

"Through art and life, I continue to bear witness to the effects of racism and structural isolation," Robinson says. "I am tracing the injustice of structural segregation and its lasting effect on my hometown."

An artist talk will take place Thursday, September 3, at 4:30 p.m. in the Stackel Room of Wilson Commons, followed by a discussion and then a reception from 5:30 p.m. to 7:30 p.m. in the Hartnett Gallery. The exhibition will remain on view through September 27.