As basketball returns to city courts, so does a way of life

PHOTO BY DAVID ANDREATTA A pickup basketball game at Cobb's Hill Park on July 8, 2020, after the city replaced the rims it had taken down in March due to concerns about the spread of the novel coronavirus.
Solomon Donaldson and Marsellis McGowan had just finished a jog around the hilltop reservoir at Cobb’s Hill Park the other morning when they descended into the park and saw something they hadn’t seen in months: people playing basketball.

To them, it was a beautiful sight.

“I always keep the ball in the trunk, because all ballers do,” said the 36-year-old Solomon, who was a player in his youth. “I said, ‘Let me put a couple of shots up since they got the rims up. Just to get the feel again.’”

A couple days earlier, the city had reinstalled the rims on the Tony Boler Basketball Courts at Cobb’s Hill and other city-operated courts that had been removed in late March as the rate of local coronavirus infections escalated.

The idea behind taking down the hoops was to preserve life amid a burgeoning pandemic. But for the hundreds of dedicated basketball players who made routine use of city courts, the removal of the rims halted a way of life.

“When it’s a lifestyle, it means more to us because it’s like something that we love to do being taken away from us, something that we live and do and train on a daily basis,” McGowan, 34, said. “It really meant a lot to not be able to shoot.”

The state permitted most recreational facilities in regions that had surpassed Phase 3 of the state’s reopening plan to open on July 6, with caveats for activities considered to be of “moderate” and “higher risk” for contracting COVID-19.

Basketball was among nine sports deemed by the state Department of Health to be “higher risk,” meaning players are to limit their participation to individual or distanced group training with no or low contact.

That morning, the Cobb’s Hill courts were bustling with a men’s pickup game, a young girl working alone on her free throws, and a handful of teenage boys running through patterns.

The sound of their play, normally lost to the ambient chatter of passersby and the din of Interstate 490, seemed amplified under the morning sun.

To Janice Taylor, who watched her grandsons play from a nearby park bench, the thumping of the ball against the pavement, the squeaks of sneakers, and the shouts of players were a symphony as sweet as birdsong.

“I see life in the boys,” Taylor said of her two grandsons on the court since the rims went back up. “It was, ‘Oh yeah! Yes, man, let’s go!’ All of that. Pure joy.”

She recalled their mood the day and in the weeks after the rims came down. “Sadness. Sorrow. Boredom,” she said. “I could think of lots of other words. It was tough. It was tough.” 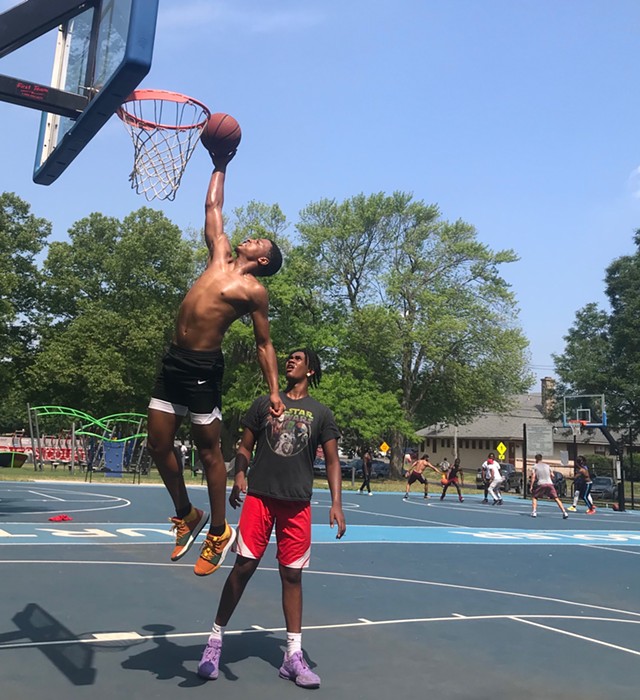 Her grandsons weren’t your average kick-around ballers. They were 16-year-old Maurice “Mo” McKinney Jr. and his 15-year-old brother, Christian Harmon, two of the highest profile up-and-comers in the local high school basketball scene.

Six months ago, McKinney sunk a buzzer-beating 3-pointer to give his Leadership Academy for Young Men an 89-86 win over McQuaid Jesuit High School and him 25 points on the night.

That morning, McKinney was working on dunking the ball with an assist from Harmon.

“It’s really a blessing to get some work in with all this coronavirus going on,” McKinney said between dunks.

The upcoming academic year is his senior year, a big year for prospective college athletes. McKinney said that he gets most of his workouts in on his own or with his father at a hoop near his house.

Since the city courts opened up again, though, he said he hasn’t stopped looking for competition.

“It’s obsessive, there ain’t no break,” McKinney said. “Now that the courts are back up, it’s really a blessing because it means I can go full-on hard.