February 19, 2020
Bourbon-barrel Blueberry Pancake Ale is a shudder-worthy phrase. It’s a phrase which denotes the kind of maximalism, unchecked bravado, and wayward experimentation slowly infecting the broader beer world. It’s a beer whose name moves me ever closer to screaming into the abyss for a damn pilsner.

Part of adulthood is admitting when you’re wrong, and this 9.8 percent brew released for the New York Beer Project’s first anniversary in Victor provided a quick kick of humility. Aged in maple syrup bourbon barrels on a bed of blueberries, this beer has an upfront, cloying sweetness which dissolves into a galaxy of whiskey, savory maple, fresh berries, red wine, oak, and caramel. It’s a decadent beer which delivers its promise right on the money.

Part of Fred Rainaldi Jr.’s opulent High Point project, the New York Beer Project is a far cry from most local breweries’ aesthetics. From its massive crystal chandelier to its two story, hardwood dining space, the building likely plays a factor in the Victor location beating out the Lockport original in popularity. 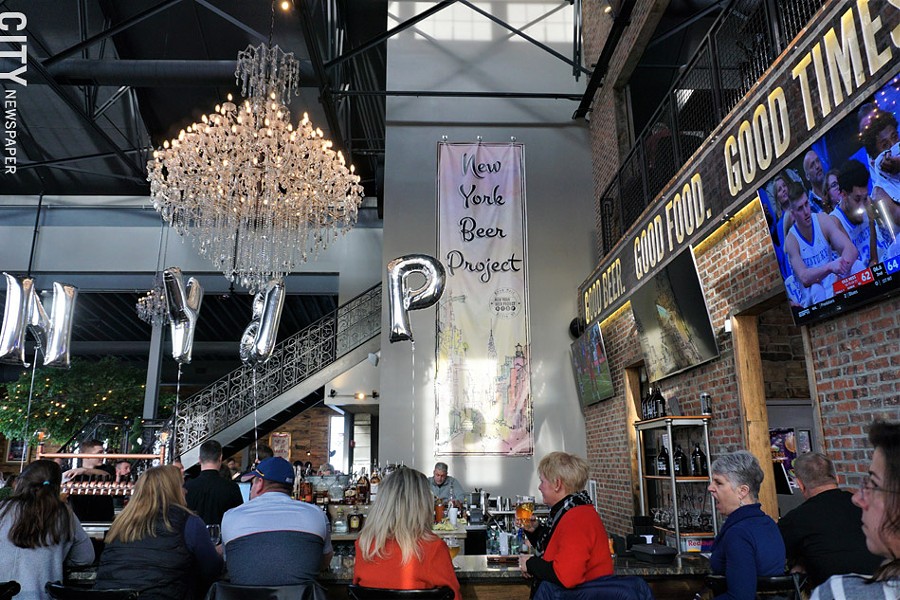 “Part of that is our Lockport location is way out away from everything,” says co-owner Kelly Krupski. “Here we’re right in the middle of the action.”

Since opening, the brewery reports sales of 273,650 pints of beer, or 8,827 barrels. That’s an impressive feat given Victor’s modest five-barrel brewhouse, though Lockport boasts 15 barrels and the two are constantly exchanging beers.

Ben Elford serves as the head brewer in Victor, and formerly as the apprentice in Lockport. At this point in the craft beer industry, most enthusiasts have become jaded enough to not be surprised by any one beer. Still, Elford’s small batch “research and development” beers are pointedly bizarre. Take the sour stout aged on chipotle peppers, or the Belgian Trippel aged in Finger Lakes grape brandy barrels.

The latter is delightful. The former is far too deep into a foreign realm where “good” or “bad” are just too simple of descriptors, but think of charred lemons and unsweetened cocoa and you’re somewhere in the neighborhood.

“We get to do a lot of experimenting with these research and development beers,” Elford says. “It’s a lot of fun, especially seeing how the barrels work with all of these different base beers.”

Gino Fanelli is a CITY staff writer. Feedback on this article can be directed to becca@rochester-citynews.com.