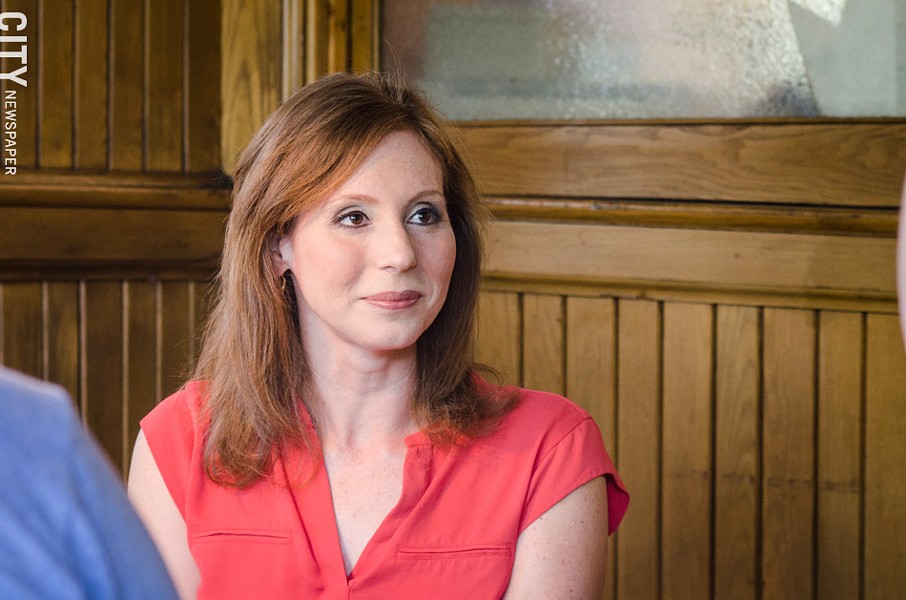 PHOTO BY MARK CHAMBERLIN Rachel Barnhart.
CITY Newspaper has endorsed my opponent in a piece that strongly suggests the outcome was predetermined. It’s regrettable that CITY has not done a single story objectively covering this race. Instead, readers will only see an endorsement article. The article quotes an ardent supporter of Harry Bronson. No one supporting me was quoted, though the publisher did contact me last week to buy ad space.

I’m disappointed CITY was so dismissive of my 17-year professional record and impact on the community. Unfortunately, that’s an attitude I’ve encountered before; it’s a misconception that broadcast journalists are shallow and attention-seeking.

I understand that building constructive relationships is critical for legislative work. I just believe more of those relationships need to be with constituents than they have been during my opponent’s tenure. Outside of affluent enclaves in Southeast Rochester, a majority of constituents are not familiar with Bronson and repeatedly tell me he has not been responsive to their needs.

CITY goes to great lengths to make Bronson’s “behind the scenes” work look exemplary, though there’s not much of a record to support these claims. Calling yourself a great worker behind the scenes is a terrific way to inoculate yourself against accountability to the public. Behind the scenes work is only part of his job. He’s not doing the work when it comes to staying in touch with constituents and making sure their concerns are heard before crucial votes. Bronson is now raising concerns about START-UP New York, which is a failed economic development program. I’m among those who raised concerns when it was first proposed.

CITY never mentioned Bronson’s vote to tie teacher evaluations to tests. Yes, it was part of the budget. However, he hasn’t sponsored bills to roll back harmful education policies. He’s been completely silent about concerns over high-stakes testing.

CITY also dismissed serious questions about Bronson’s use of taxpayer-funded mail and his travel expenses. CITY never asked him why he supports a pay raise for lawmakers. Bronson is deeply-entrenched in Albany’s broken system and wants us to believe this system works for us.

Mary Anna Towler’s response:  We’re happy to let Barnhart make the case for her election, and we welcome other responses related to that race. However, Barnhart’s reference to “the publisher” calling to discuss advertising – as though it were related to our endorsement – deserves comment.

This company has two co-publishers: my husband Bill and myself. Bill’s responsibilities are in sales and marketing; mine are in editorial. Both of us, as publishers, manage the top operations and direction of the company.

For all of CITY’S 45 years, we have adhered rigorously to journalistic ethics. Our staff adheres to those ethics equally rigorously. CITY is not Bill and me; it is 19 staffmembers; numerous freelance writers and photographers; distribution folks, and a board of directors that provides business counsel. To suggest that our political endorsements are linked to advertising purchases is to attack the integrity not only of my husband and myself but also the integrity of all of these dedicated, talented CITY people.

We have never based editorial coverage on advertising. Our editorial staff bases its endorsements and other editorial decisions on research, experience, knowledge of the community, and extensive, lively discussions. I am proud of the knowledge, perception, and humility that they bring to that important responsibility and deeply regret Barnhart’s suggestion that they have acted unethically.

The members of our sales staff have reached out to political candidates every year of our publishing history, as they do to people, businesses, and organizations throughout the year. Like many media salespeople, ours sometimes lose important sales because of editorial coverage a client perceives as unfavorable or politically objectionable. The loss affects these salespeople financially, and they take those losses with professionalism and grace, for which we are grateful.

Our responsibility is to our readers and the general public. Our ethical standards are our most valuable attributes. An attack on our editorial, advertising, and management decisions is perfectly acceptable. An unfounded attack on the ethics of the superb people who produce CITY is not.