Amy DeBruyne flashes a middle finger to the board. "Darts is the goddamn stupidest game I've ever played," she mutters. It's a lie obvious to everyone huddled in the back of the Sunset Lanes bowling alley in Gates. The Women's Singles Finals is prime viewing at the Rochester Open, the city's most prestigious tournament for steel-tip darts.

"Get me a Jack-fire, chilled," DeBruyne hollers to a friend. The city's top-ranked female steel-tip player needs a steadying drink. 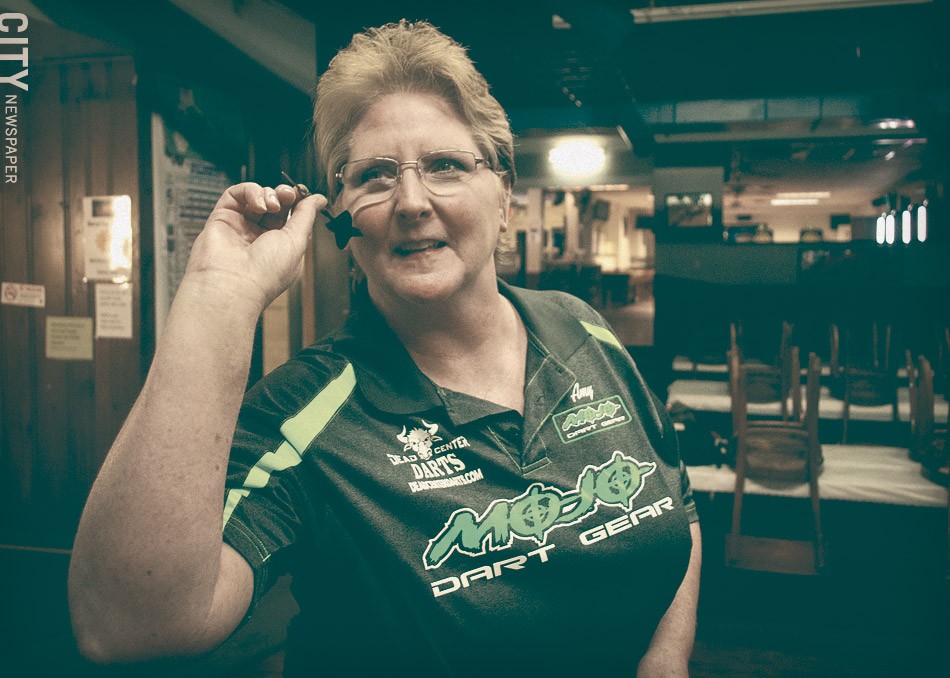 To a community of Rochesterians, darts is more than an amusement many sidestep on their way to order another drink at the bar. Local players put in hours of training and an uncountable number of throws to perfect the craft in weekly leagues and regional tournaments. The Rochester Open is the city's Super Bowl of steel-tip darts, drawing the best throwers in and out of the region. The men and women of steel-tip, like DeBruyne, talk proudly about the game's rich connection to Rochester's past yet lament the forces endangering the future of their favorite sport.

DeBruyne, a Henrietta resident, is playing 501, a common darts game. Each player begins with 501 points and attempts to shoot their way down to zero. The first thrower to lose all of their points wins. Values labeled 1 to 20 in varying order outline the board, with doubles and triples rings offering players thin targets to make grander deductions. When a player nears 0, they are required to hit the doubles ring to "close out" and win a match.

In the Final's third and decisive leg, DeBruyne misfires, embedding her dart in the lowly 1-point segment, placed diabolically close to the valuable 20-point section. In darts, millimeters can mean miles. The difference between DeBruyne scoring a 60-point "triple 20" and a "fat" single 1-point is a sliver of space on a multi-colored cork board coated in authentic horse hair.

DeBruyne, a division manager on weekdays, shoots from the throwing oche (pronounced like hockey) 7 feet and 9-1/4 inches away. Unlike on a beer pong table, leaning over the oche is permissible, and DeBruyne takes full advantage, edging her right foot to the line before lifting a 24-gram dart to the round of her cheek and uncoiling.  Her next shot sticks in the triples ring below the 20, and DeBruyne grunts in relief at this 60-point shot. The "triple 20" sets her up for the Singles Title and a respectable $290 prize.

Amy DeBruyne came to darts through her first husband in the early 1990's. Her passion for the game outlasted that marriage and brought her to her second. She met Dave DeBruyne during league play in 2002 and they married three years later. Having gone winless most of her rookie season, Amy has grown accustomed to victory. She captains her team at Corner Sports Bar in East Rochester, with Dave, the league's president, rooting her on. Her player ranking bests any other woman's in Rochester, according to the American Darts Organization, steel-tip darts' organizing body.

Though competitive, congeniality runs through the tournament hall. Many of the 120 tournament players hang out on Tuesday league nights around the city. Wearing darts jerseys and casual t-shirts, they chat freely about spouses and work. Erika Mardo, DeBruyne's opponent, roomed with DeBruyne and her husband during a recent tournament in Albany.  When, late in the Finals, Mardo sends a dart careening off the board, DeBruyne tells her to "step back" and recollect her emotions, like a caring sister. When Mardo hastily shanks her next shot high, DeBruyne curses as if she was the one who miss-hit.

These bonds are built across decades of Tuesday evenings in dive bars around town. The Genesee Valley Darts Association has hosted league nights since the 1980's.  Players arrive, some directly from their 9-to-5s, at a home bar scattered around the city: McGinnity's, Bathtub Billy's, and Casey Jones, to list a few. The bars donate wings and cheap beer. Unlike the Rochester Open, no money or ranking points are on the line, just ego and the chance to relax with familiar faces.

"You typically know everyone here," says Nick Maguire, a 62-year-old career delivery man who has played at Casey Jones on Ridgeway Ave since 1982. When matches end around 10 p.m., a handful of men migrate to other bars to throw more darts.

The game demands elementary math be performed at warp speed. "If you don't have to move off the line to calculate, you stay in a good rhythm," DeBruyne says. "Common Core hurts the younger players. They want time to do a hundred steps to solve a problem."

Offer any seasoned darts player a number under 180 and they'll rattle off numerical combinations like an auctioneer, detailing their preferred path of subtraction from X to zero.  "111? I would go triple 20, 15, and close out with a double 18," explains Johnny Lee Jenkins, one of the best darts throwers in Rochester and the closest thing the Open has to a celebrity.

Jenkins, who picked up darts while serving in both Desert Storm and the Iraq War, now traverses the globe as a semi-professional darts player, taking home four-digit paydays from tournaments in Singapore and China, with plans to play England's esteemed Lakeside tournament. He is approaching a national ranking and has his own line of darts.

On this day, the East High graduate floats among the 25 dart boards lining the wooden walls of Sunset Lanes, chatting with competitors as George Strait's "She'll Leave You With a Smile" plays softly in the background.  "They're intimidated before they shoot against me," Jenkins admits of his opponents.

The name "Johnny Lee" carries weight at tournaments around town.  "People get up to the line and start trying too hard because they know they need really good shots to beat me," he says.

In matches, Jenkins is all kinetic energy and smiles, constantly flipping his darts and bantering with anyone around. He practices two to four hours a day at Dead Center Darts, the store neighboring his mechanic shop on Buffalo Road. "I'm a perfectionist, and this is one game you'll never perfect," he says.

Jenkins, usually the best player in a room, takes notice when an outsider beats him in the weekend's opening event. "The guy from Alabama is out of control," Jenkins says shaking his head. The guy from Alabama is Gene Walts, a retiree with a bushy gray mustache and immaculate hand-eye coordination. He flew to Rochester with a friend for the Open, topping players from Ontario, Cleveland, and Boston for longest distance traveled.

Sunset Lanes is littered with bottles of Labatt Blue and Blue Lights. "There are some players who can't play sober," Jenkins says. "A lot of people got to get that buzz to concentrate on darts rather than anything else." DeBruyne favors vodka tonics for her "aiming fluid," a contradictory combination on the surface, while Jenkins nurses a few Jack and Cokes to steady the brain waves.

The Rochester darts community is split in two. Steel-tip, the one with piercing tips, is the traditionalist's game. It sprang up from British pub culture in the 1950's and 60's, when government austerity measures pushed people to find solace and sport in their community bars.

"Darts didn't cost you nothing," says Maguire in a lilt that reveals his native England. In 1977, Maguire helped start the Genesee Valley Darts Association. Out of a bar called Sgt. Peppers in Greece, Maguire and the GVDA grew steel-tip darts from seven original members to 16 divisions, with eight teams per division.

At its height in the 1990's, 700 Rochesterians were competing yearly in GVDA leagues. Seasons peaked at the Genny Light Open, the city's premier darts event, where 200 participants filled downtown's Crowne Plaza to vie for a pot of $16,000.

"My wife would say we need some extra cash," Maguire remembers, "and that's what I'd do: make money at those tournaments."

The Genny Light Open ended in 1997, steel-tip darts dwindling with it, and now, the GVDA has only one division. Stricter indoor smoking laws have certainty put a dent in the sport's popularity as well.

Yet nothing has eroded steel-tip participation more than the rise of soft-tip darts. Younger players are gravitating to the arcade-style game where players plant plastic-tipped darts into pegged nylon boards. The electronic boards keep score, even if the dart bounces off — to the dismay of many in the steel-tip old guard.

"Soft-tip is a no-brain game," Gene Walts says. "Young kids are spoiled. They don't have to know their math." Still, Walts is in the minority. Soft-tip darts, an American invention from the 1970's, is cannibalizing its older brother.

The allure of the newer version is undeniable. Shorter games and automatic scoring lower the barrier of entry. More than 850 local players registered for soft-tip leagues last fall according to Cap Amusement, one of the area's largest providers of recreational vending equipment. Just over 100 still play GVDA steel-tip in Rochester. "There's ease in just putting your money right into the electronic board," says Janell Falvo of Cap Amusement.

"I used to laugh at soft-tip," Maguire confesses.  The man who once pinned a dangling cigarette from his wife's mouth onto a dart board with a steel-tip had vowed never to play the plastic version. "Now it's like the only game in town. Basically, you've got to change with the times," he says.

Steel-tip players like Amy DeBruyne and Johnny Lee Jenkins compete in soft-tip, too. Conversion darts allow tips to be unscrewed and replaced depending on the style of play. A player can find competitive soft-tip tournaments in town on most weekend nights. The Big Dog Classic sees hundreds enter Rochester's largest soft-tip event in February.

"Steel-tip will always be my passion. I was reluctant to switch for a very long time," DeBruyne says of her soft-tip experiences. "But darts is darts. My ultimate goal is to win. It doesn't always happen, but I try."

DeBruyne closes out the Rochester Open with a few choice words after a fourth place finish in Cricket, another popular darts format. She seeks more for both the tournament and herself. She wants the city's once prominent steel-tip centerpiece to secure a major sponsor again and see prominence and payoffs rise accordingly.

Two weeks ago, DeBruyne finished top 10 at a State Qualifiers, thereby guaranteeing her spot on the New York Women's Dart team for a third straight year. Beyond any one tournament or team, DeBruyne seeks a more professional existence on the darts circuit, where apparel endorsements could afford her time away from the office to compete across the country. She knows the players in that top-tier, battles against them, and knows she is not far off. It's no pipedream.

"It's a level I can reach," DeBruyne says. "A lot of women shy away from the top players because they don't think they'll have a chance. I can't wait to play them."

EDITOR'S NOTE: This article has been updated to correct Dave DeBruyne's and Nick Maguire's last names.