The South Wedge is quickly becoming my go-to place for just about anything I might need. Craft beer? The Tap & Mallet fills that niche admirably. A reliable place to take your girlfriend and her parents for dinner? Zeppa Bistro's a great choice. Jamaican for lunch? Peppa Pot. A dive bar to suck down PBRs and shots on the cheap? Lux Lounge. Chocolate to get you out of trouble after spending far too long at Lux? Hedonist is right next door.

Until recently, though, the South Wedge was not blessed with one of the essential hipster sacraments: sushi. In October, Nick Grammatico, owner and chef at the successful sushi joint Piranha on Park Avenue, decided that it was long-since time to fill that niche. So he and his brother Matthew opened Banzai Sushi and Cocktail Bar.

Banzai is not Piranha II. More strictly Asian-inspired than its big brother across town, Banzai offers only sushi and modern Chinese-ish dim sum along with a full bar. (Piranha offers only wine and beer, and Grammatico decided that he wanted the room to experiment that a full bar would provide him and his crew.)

While Piranha was playful and exuberant at 5 months old, Banzai is a remarkably mature restaurant. Grammatico claims that Piranha was his "masters degree" in restaurant management. He applied everything he learned there to his new digs on South Avenue. There are few if any rough edges to the place, the service, or the food. If the hallmark of a mature restaurant is consistency, Banzai is already poised to be very successful.

Late on a Thursday night, the long bamboo-topped bar at Banzai was crowded with an eclectic assortment of 20- and 30-somethings. The younger members of the crowd were drinking what they called Genny-sakes — Genesee pounders with shots of sake on the side — and trading quickly emptying plates of maki rolls between them. Down toward my end of the bar, things were a bit more refined, with folks savoring selections from Banzai's cocktail list and eyeing each other's generously portioned dim sum with envy (the grass always seems greener on the other side of the fence, but in this case both sides were lush and verdant).

I was sipping an American Pie, a concoction of whiskey, reduced apple cider, and cinnamon that struck just the right warm, cozy note for a chilly March night, and nibbling at a plate of white, fluffy steamed buns full of shredded duck slathered with a spicy barbecue sauce and finished with a bit of scallion ($6.50). The couple nearby were gushing over a plate full of crab rangoons while drinking a rum-based cocktail arrestingly called The Walking Dead. They were so effusive in their praise of the rangoons that I had to order a plate for myself, and they were right — they were sensational. Grammatico has always liked to play with his food; that's one of the hallmarks of the menu at Piranha, and the crab rangoons that he put on the menu over at Banzai ($5.50) are an upscale riff on the Chinese restaurant staple. They offer an approximately 50-50 mix of what tasted like high-quality crab meat and probably a ricotta-cream-cheese blend with scallions encased in empanada-sized pockets of fried wonton skins. The result is elegant, creamy, and eminently satisfying, particularly when accompanied by a drink that seems to distill the essence of summer in a glass: a cucumber lemonade made with Hendricks gin, pureed cucumber, and fresh lemon juice.

Banzai, though, is mostly about sushi. Grammatico and his newly installed executive chef at Banzai, Joachim Quintana, both learned — or at least honed — their sushi skills at California Rollin' in Village Gate. Quintana was among the first people that Grammatico brought on board when he opened Piranha. Both men are squarely in the tradition of eclectic, even odd-sounding maki, rolling cream cheese, mango, red-curry chicken, and bacon along with tuna, escolar, octopus, salmon, and smoked eel in rice and nori. The results are tasty and remarkably well composed.

Sushi at Piranha in the early days tended to be a bit more loosely constructed, the rolls sometimes cut unevenly or falling apart under the weight of Grammatico's attempts to stuff just one more thing into rolls already burstingly full. Almost five years of making sushi daily has turned Grammatico into a master roll-maker, and he's clearly taught his skills to everyone who rolls sushi for him. Banzai's rolls are precisely cut and never mashed as might happen with a knife that's not razor sharp. Sure, the ends are a bit messy, and the rice is not quite as tightly bound as it might be, but the rolls themselves are tasty and crowd pleasing. 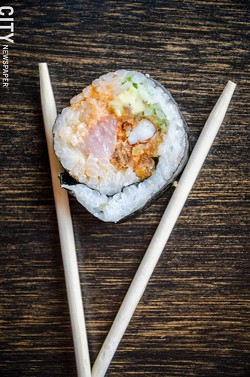 Spicy tuna with basil, a Grammatico signature, found its way over from Piranha, as did the Spider and Sea Monster rolls. New creations, though, have also shown up. Spicy shrimp and creamy-cool avocado covered in ever-so-slightly briny salmon make the Acapulco Gold roll ($11) a winner. The charmingly named Delicious Fishes roll ($9) stuffed with bits of ultra-mild escolar avocado, chili pepper, and diced tomato drizzled with lemon juice and finished with deep-fried onions is vaguely and pleasantly reminiscent of ceviche.

But I'm a sucker for bacon, and the Hot Rod roll ($10.50) in which crunchy bits of the stuff are incorporated into the rice on both the inside and outside of the roll along with smoked eel, cream cheese, avocado, and scallion did not disappoint. Smoked eel and bacon are a natural complement to each other, salty and meaty foils for cheese and avocado all pulled together by, oddly, the nori, which is usually a fairly neutral background player. While his other rolls are pretty and tasty, it's the Hot Rod that shows us that Grammatico still has a taste for whimsy in his food, and that Banzai isn't likely to remain staid and sober for very long.