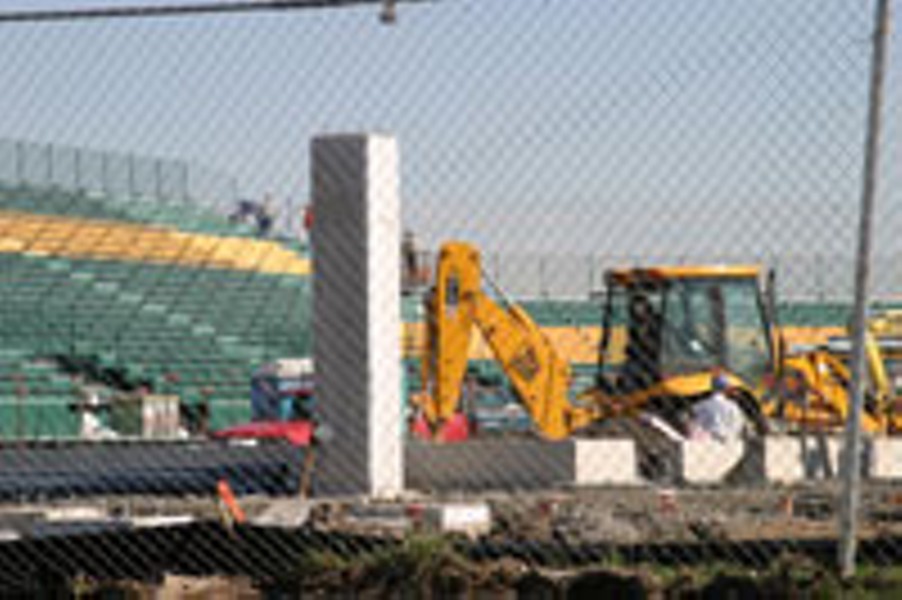 Photo by Jason Woz Field of dreams and dollars: PaeTec Park under construction

The Rhinos have entertained Rochester for nearly 10 years. I'd say the actual on-field product is like a Mercedes-Benz. But at the end of the day, I have visions of management parking the Benz outside a broken-down mobile home, not inside the heated garage of an Ambassador Drive mansion. I just don't think the team makes much money, and Dun & Bradstreet says the Rhinos' credit rating stinks.

Rhinos President Frank DuRoss once told me that his team's financial challenges are the result of playing at Frontier Field, where the Rhinos reap about five percent of the concession money when they play games. That would seem to greatly hamper their profitability.

Red Wings officials --- whose team is Frontier's primary tenant --- dispute DuRoss's claim, and they feel it casts their team as the bad guy responsible for keeping the Rhinos down. They say the Rhinos' charges are unfounded: The soccer team gets five percent of the concessions because it doesn't pay much to lease the stadium for games.

Yet DuRoss keeps perpetuating the story that his team's lease is awful and that it's the main reason the Rhinos are slow to pay their bills. And we've fallen for it.

Still, for some reason, state officials just want to keep giving the Rhinos more money. They seem to want to spare the team any possibility of embarrassingly defaulting on a loan.

In March, DuRoss requested $9 million more in state aid for the construction of his team's new Oak Street stadium, PaeTec Park. This came after DuRoss said a while ago that he didn't foresee any more need for public funds. The additional cash would be used to pay for Phase II of the construction, which would include more seats, a press box, and a video replay system.

If someone wanted to pay for a new roof and new siding to my house --- or better yet, tear it down and rebuild it in a manner fitting a Great American Writer --- I certainly wouldn't turn him down either.

Here's how we must think about this whole stadium project and the approximately $28 million in taxpayer money that likely will be used to build it: This public money has probably been allocated for public-entertainment construction projects across the state, so if that money is already going for entertainment facilities somewhere in New York, it might as well go to Rochester.

In Manhattan, officials are talking about building a $2 billion Jets football stadium-Olympic stadium-convention center facility. I imagine that in order to get legislative approval for what would obviously be a major publicly funded project downstate, state lawmakers here are trying to get some money for upstate projects in exchange for their votes. And PaeTec might be considered by those lawmakers to provide the biggest bang for the increased state bucks.

Is it sick that we use public money to build facilities for privately owned sports organizations? Of course. You can cry about the decaying neighborhood around Oak Street and discover other more appropriate uses for public money, but politicians get elected for bringing new stadiums to communities, not beautifying inner-city neighborhoods.

DuRoss is hoping the Rhinos will someday be a Major League Soccer franchise, and that Major League Soccer will take off in the US. If those two things happen, a financial windfall could be in store for DuRoss. It might not reach the level of what Bills owner Ralph C. Wilson's $25,000 investment in 1959 eventually became, but it would be substantial.

So we all have a stake in DuRoss's dream. Decry the sickness of it all, but really, when it comes down to it, Mercedes don't belong in trailer parks. That's, like, totally gauche.