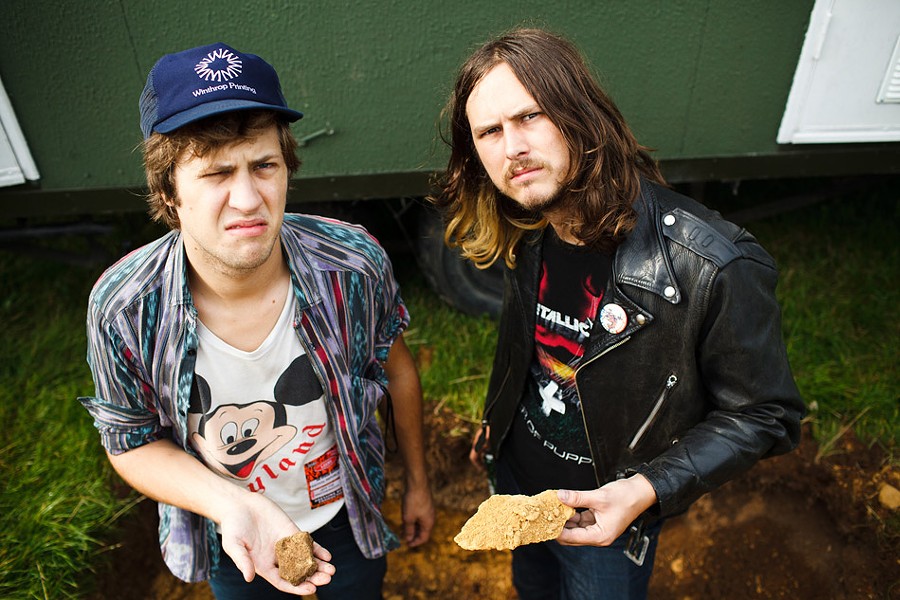 PHOTO PROVIDED Brothers Jamin and Jake Orrall have been working as the two-piece band Jeff the Brotherhood since 2001.
Jeff the Brotherhood With Lamby and The Ginger Faye BakersSaturday, June 13Bug Jar, 219 Monroe Avenue9 p.m. | $12-$14 | bugjar.com; jeffthebrotherhood.com

There's a distinct difference between a duo and a two-piece band. Nashville's Jeff the Brotherhood is two cats, brothers in fact, that make up a two-piece band. But they ain't a duo, Gumby. The band's very existence since 2001 has helped clarify the duo-two piece conundrum. And it's all in the size of the band's sound. For just two musicians, Jeff the Brotherhood is huge — huge, I tell ya. It covers the sound spectrum completely. You don't miss a goddamn thing. Guitarist Jake Orrall serves up a grungy wash of psychedelia and hard rock. Listening on the periphery, you'll hear him come close to drop-tuned metal, a la Black Sabbath, and the blues without ever blatantly tapping into them. Regardless, it's massive as it rises above the crack and boom of his brother Jamin's percussive thunder. At times, you might be tempted into classifying the band as stoner rock but Jeff the Brotherhood has too much motion and boogie than the requisite genre's grinding dirge. Simply put, it's rock 'n' roll.

The band is a cult favorite live, with its relentless energy and volume. SPIN Magazine referred to the band as one of its "must-see acts" in 2011. The brothers have rocked stages big and small, nationally and internationally, and they've invaded living rooms via David Letterman and Jimmy Fallon.

Not to be confused with any other two-piece, White Keyed, Black Striped band out there, Jeff the Brotherhood recently ramped things up by bringing along another guitar player to add to the weight. Jeff the Brotherhood has worked with artists as diverse as Jack White and Insane Clown Posse, and runs its own Infinity Cat record label. The latest album — the band's ninth among a huge catalogue of singles and splits — is "Wasted on the Dream," where the band may have beefed the sonics up a bit while leaving the sheer intensity and immediacy intact.

City Newspaper shot a few short questions at Jake Orrall. He shot back some even shorter answers, for instance...

City: What are the advantages to being a two-piece?

Jake Orrall: We aren't a two piece anymore on stage, but off stage it's less paperwork.

What are the disadvantages to being a two-piece?

Less people to carry gear, and getting compared to other two-piece bands we sound nothing like.

How do you describe your music?

How does the new album differ from your previous work?

It has bass on it.

How has the band remained the same?

Any new bands in particular that you like right now?

I have a delay pedal now.

What is something you'll never do?

Cut my own dick off.