Every year, thousands of people in Monroe County are held in jail for weeks or months without a trial because they're too poor to afford bail.

Activists have been pushing for reform, and Governor Andrew Cuomo argued eloquently for it earlier this year. But when the state legislature approved a new budget at the end of last month, bail reform was nowhere to be seen. And some activists say they were frustrated by what they call "watered-down proposals" that the legislature was considering and that would have preserved discrimination.

The intent of bail in New York is to ensure that defendants show up in court. But if they can't pay bail or pay a bail bondsman, they must stay in jail until their court date. That date could be right around the corner or it could be months away, depending on a number of factors: how congested the court calendar is, for instance, or how ready the prosecution is for trial.

Technically, New York's bail law is "pretty progressive," says Katie Schaffer, statewide organizer for the reform group #FREEnewyork. Judges are required to set two forms of bail, and state law lists nine different types that can be set, including cash, a bond provided by a bail bondsman, credit cards, and personal property. The defendant or a family member could put up a car or a house as collateral.

Most often, however, the two forms that judges set are cash bail and bail bond. And that disproportionately affects poor people.

The New York Civil Liberties Union recently released a study it conducted on the use of bail in eight New York counties in the state. Among its findings: In the five years between 2010 and 2014, 4,760 men and women were jailed for a week or more in Monroe County because they couldn't afford a bail of $500 or less. More than 1,900 spent a week or more in jail because they couldn't post bail of $250 or less.

Of the nearly 28,000 people held on bail in the Monroe County jail during that period, 14,656 of them were charged with misdemeanors.

In addition to disproportionately affecting poor people, the state's bail system affects people of color more negatively than it does whites. In the eight counties included in the NYCLU study, 50 percent of people who spent at least one week in jail were black; 38 percent were white. And in all eight counties, "people of color were detained pretrial longer than whites," the report said.

And if it affect's someone's family, Donaher says, "then it can also affect their education, self-worth, and a lot of things in life." 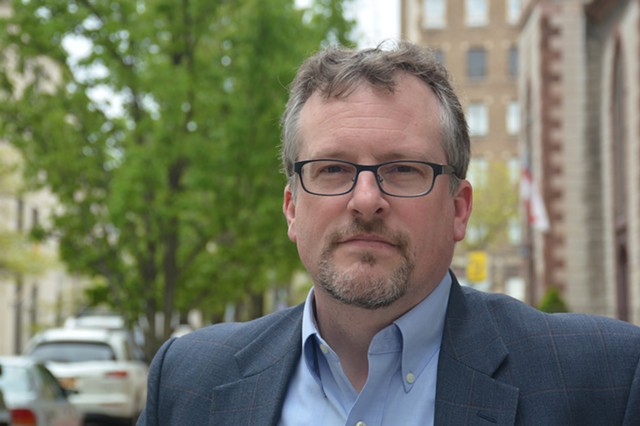 Any amount of time in jail can have a negative impact, Donaher says: "Research has conclusively established that if someone is held pretrial – and it doesn't need to be their entire time pretrial; if they're held three days in pretrial detention – there are a significant number of deleterious effects that happen."

Among them: missing work, school, or other responsibilities. Few employers are sympathetic when an employee isn't at work because of a stint in jail, even if charges are later dropped.

For the mentally or physically ill, Donaher says, pretrial detention means skipping medication for days at a time, getting adjusted to a new schedule, or being in a location that can exacerbate the illness.

"It would seem to me that bail was created to keep folks in jail," says Robert Hoggard, a board member of Metro Justice. "The pretrial decision process is to keep those who are a danger to society or a flight risk in." But, he adds, "I also think – and I don't know how much people talk about this – we see a lot of mechanisms in place" that are designed solely to make money.

"The bottom line is, cash bail or bail bonds, there is money involved," says Tim Donaher, "and our clients – by virtue of the fact they're our clients – are poor. They're indigent."

Indigence isn't rare in Rochester and in Monroe County's towns, given the area's systemic poverty. And for the public defenders' clients, Donaher says, "any amount of cash bail is an enormous obstacle, because they don't have cash."

As the NYCLU report notes, the state's bail system is disproportionately affecting black New Yorkers. Donaher says it's not that judges are overtly racist; it's the byproduct of a system that needs changing.

"I don't think there's anyone sitting back there up on the bench saying, 'You know what? I want to hold every minority person that comes into my court,'" he says. "It's not that. It's more of, it's just very hard for judges because of fast-paced arraignment."

Or, he says, it can be a problem of judges not having enough information to do an individual assessment – "to say, 'OK, what's the real minimal amount I can set here?'"

And poor defendants may not have help pressing a judge to look for options to cash bail or a bailbondsman, says Donaher. "If there's no one advocating for them saying, 'Judge, he's poor. He can't make cash bail, but would you accept other forms or a secure bond? His parents will put their house up....'" Lacking that support, the defendant will go to jail to await a court date.

Court congestion can also play a role, Donaher says. Even though defendants are supposed to get a speedy trial, "there is an exception for court congestion," he says, "so they won't dismiss cases because of congestion."

Congestion is a problem in New York City, but it doesn't happen as often in Monroe County, Donaher says: "On average, we're trying cases in Monroe County well within a year of the arrest. In felony cases, even earlier. It's only due to outside factors we get delays."

For instance, he said, "there is no way in a murder prosecution in Monroe County that the autopsy report will be done and final within eight months. Just not going to happen, because of the backlog in the Medical Examiner's office. And often times, they send stuff out to be tested, and to private doctors who aren't going to put the needs of the ME before their patients."

"Incarcerating people pretrial leads to guilty pleas," says #FREEnewyork's Erin George. "They have no idea of when they'll get to trial or what information is on their case, so it's easy for prosecution to coerce guilty pleas. If everyone pursued their legal right, the system would implode. It requires a number of people take guilty pleas... 'If I sign this piece of paper, I get to go home? Done.'"

But that has consequences. The charge is then on the defendants' record, casting a shadow on future opportunities for employment and housing. And Donaher says defendants are also more likely to be held for higher bail if they're arrested in the future.

In his annual State of the State address, Governor Andrew Cuomo proposed reforming cash bail and other parts of the criminal justice system. He discussed eliminating cash bail for misdemeanor and non-violent felony charges, requiring prosecution teams to reveal their evidence in a more timely manner, speeding up trials by reducing delays, and holding prosecutors accountable for their delays. All of these could contribute to keeping people out of jail for as long as possible, the governor said.

"Let's be painfully honest," Cuomo said. "The truth is that our Lady Justice is still not colorblind, and her scales are still not balanced. Our bail system is biased against the poor."

But Cuomo's proposal would also have added a clause to evaluate the dangerousness of a defendant. That would require a risk assessment, which can be unfair, says Erin George, New York State campaign coordinator at JustLeadershipUSA, the organization under which #FREENY operates. "It's not possible," she says, to accurately predict how dangerous someone is "based on predetermined assessments."

"The data and measures used" – the age of someone's first arrest, for instance – "are tainted with racism," she says.

George and JustLeadership criticized the state's proposed bail reform for not going far enough. Among other things, they and other activists had pushed for eliminating money bail altogether. They wanted assessment of a defendant's dangerousness excluded from pretrial assessments, and they wanted a "presumption of release in all cases."

"The current proposals," the statement said, "will allow racial disparity to remain at the center of our pretrial system."

Full reform is necessary, the activists say, because without it, the issue won't really be resolved.

And in a statement following the budget vote, George said: "Decarcerating New York must happen in tandem with investing in communities. In light of this reality, we also recognize that this budget failed to meet the full demands of our many partners working on vital housing, education, healthcare, reproductive rights and protection of basic needs that our communities need to thrive."

As for what's next in the push for bail reform: In an interview last week, Rochester Assemblymember Harry Bronson said the recent reform effort was a victim of pressure stemming from the state budget's deadline. Bail and other key reforms like education policy and election reforms were removed from negotiations, he said, so that legislators could pass the budget by April 1, as they're required to do.

Bail reform, Bronson said, is a complex issue. "The difficulty is balancing two policy issues that are very important," he said. "We want New Yorkers to be confident they'll be treated suitably and fairly in court regardless of economic status. But we also want to make sure that if someone has been brought to the attention of the criminal justice system, particularly as a threat to the public safety, that that's taken into consideration."

"For us in the Assembly," Bronson said, "we wanted to require the least restrictive alternative to monetary bail that would reasonably assure a defendant would return to court. We were keeping public safety in mind, too."

While the Assembly legislation called for eliminating cash bail for misdemeanors and nonviolent offenses, the offenses in those classifications aren't as obvious as one might think, Bronson said. Offenses that would seem to be violent felonies sometimes aren't, he said, and vice versa.

The complexity of the bail issue, and the pressure of the budget deadline proved too much to overcome, Bronson said.

"We just didn't have a sufficient amount of time to work out these conflicting issues," he said. The legislature is on post-budget break right now, but it'll be back in session April 16.