Back to film school

Before I see a new movie to review, I always try to make sure I've done my homework. Some supplemental viewing prior to setting foot in the theater can often provide a film with helpful context and background. And a familiarity with a filmmaker's influences and previous works can make for an even more enriching experience.

With that in mind, I've paired the films I'm most looking forward to seeing this fall with what I'll be making time to watch beforehand. If you have any questions or comments, join the conversation in the comments below.

"mother!": Plot details are still vague about Darren Aronofsky's psychological thriller, but we know it revolves around a husband and wife (Jennifer Lawrence and Javier Bardem) whose marital tensions are exacerbated by the arrival of another couple, played by Michelle Pfeiffer and Ed Harris. And I'll watch that cast do pretty much anything. (September 15)

Supplemental Viewing: Aronofsky's previous foray into the genre, "Black Swan," earned star Natalie Portman an Oscar for best actress, and it's a masterclass in psychological terror.

"Battle of the Sexes": In 1973, tennis pro Bobby Riggs challenged champion Billie Jean King to a $100,000, winner-take-all tennis game in an effort to prove to the world that male athletes were superior to females. Directing duo Jonathan Dayton and Valerie Faris dramatize the infamous grudge match in "Battle of the Sexes," with Emma Stone and Steve Carell playing King and Briggs. (September 22)

Supplemental viewing: Dayton and Faris's most successful effort, "Little Miss Sunshine," is always a crowd-pleaser, but they previously took on issues of gender in the underrated "Ruby Sparks," which poked fun at the "Manic Pixie Dream Girl" trope.

"Marshall": Chadwick Boseman, who will star in 2018's "Black Panther," leads this biopic of Thurgood Marshall, following an early case in the future Supreme Court Justice's career when he worked as a lawyer for the NAACP. And hey, it was filmed in Buffalo. (October 13)

Supplemental viewing: Complete the Chadwick Boseman biopic triptych of esteemed black Americans with "Get On Up," in which he stars as James Brown, and as baseball pioneer Jackie Robinson in "42."

"Wonderstruck": Director Todd Haynes reteams with star Julianne Moore for the fourth time in "Wonderstruck." Based on a novel by Brian Selznick, the story jumps between two plotlines set in New York City 50 years apart: One follows a 12-year-old deaf girl in 1927, the other on an 11-year-old boy in 1977, and both end up on a visit to the American Museum of Natural History. (October 20)

Supplemental viewing: Selznick's work was previously adapted by Martin Scorsese in "Hugo," a delightful ode to the magic of silent films.

"Thor: Ragnarok": I'm eager to see what Taika Waititi — the mad genius behind the drop-dead hilarious vampire mockumentary "What We Do In the Shadows" — does with this Marvel superhero adventure. "Thor: Ragnarok" will find the God of Thunder squaring off against Hela, the Goddess of Death (Cate Blanchett). (November 3)

Supplemental viewing: Waititi's brilliant "What We Do in the Shadows" and "The Hunt for the Wilderpeople."

"Three Billboards Outside Ebbing, Missouri": Frances McDormand stars as a revenge-seeking mother who antagonizes an entire police department in the hopes of getting some answers in the long-unsolved murder of her daughter. This comes from writer-director Martin McDonagh, so expect something both brutally funny and just outright brutal. (November 10)

Supplemental Viewing: Martin McDonagh's "In Bruges" is another piercingly dark comedy, with fantastic work from Colin Farrell and Brendan Gleeson.

"Coco": Pixar sets its latest film around the Mexican holiday of Dia de los Muertos and follows a young boy who's accidentally transported — and eventually becomes trapped in — The Land of the Dead. Based on the trailers, the film looks absolutely stunning. (November 22)

Supplemental Viewing: "The Book of Life," the 2014 film from Jorge R. Gutiérrez, is an underrated animated, supernatural fantasy that takes a different look at the holiday's rich cultural traditions.

Supplemental viewing: "A Bigger Splash" demonstrated that Guadagnino knows his way around stories set in the sun-dappled landscapes of Italy. And the indie dramedy "Miss Stevens" features a wonderful performance by Chalamet, who's definitely a young actor to keep an eye on. 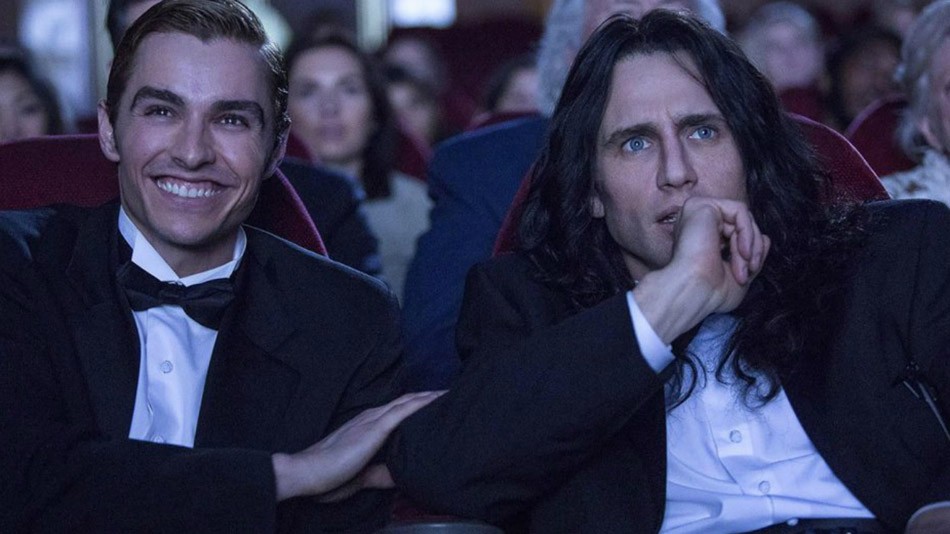 "The Disaster Artist": Oh, hi Mark! James Franco directs and stars in this adaptation of Greg Sestero's book about his experience with "The Room." Sestero starred as Mark in Tommy Wiseau's cult-classic of terrible cinema. (December 8)

Supplemental viewing: It'll be helpful to know the film that inspired the insanity, so definitely watch "The Room." But buckle in; it's a trip. Then watch "Ed Wood," Tim Burton's masterpiece about another director whose enthusiasm far exceeded their talent.

Supplemental viewing: This being Guillermo del Toro, the plot doesn't necessarily play out exactly as you might expect. "The Creature from the Black Lagoon" might set the mood nicely, as would the auteur's haunting, Gothic romance, "Crimson Peak."

"Star Wars: The Last Jedi": Rian Johnson directs the next installment of the adventures started by Rey, Finn, and Poe Dameron in 2015's "The Force Awakens." (December 15)

Supplemental viewing: Sure, you could watch the previous "Star Wars" films as a refresher, but you might be better off trying "Twelve O'Clock High," "Three Outlaw Samurai," or "To Catch a Thief," all of which Johnson has namechecked as inspiration. Johnson's excellent time-travel thriller, "Looper," is also highly recommended.

Supplemental viewing: A trailer for this one isn't out yet, so it's hard to know what tone it's going to strike. But let's start with a classic: "The Incredible Shrinking Man."

Supplemental viewing: While not immediately related, I have a feeling "Moulin Rouge" might set the stage nicely.

Untitled Paul Thomas Anderson Fashion Film: At the time of this writing, there's still isn't even a title for this surefire Oscar-contender, starring the soon-to-be retired Daniel Day-Lewis as a dressmaker working in the world of 1950's London fashion. (December 25)

Supplemental viewing: I'll probably make time for a viewing of Daniel Day-Lewis's last collaboration with director Paul Thomas Anderson, the brilliant "There Will Be Blood."

"The Post": Steven Spielberg. Meryl Streep. A juicy story chronicling the print-worthy battle between The Washington Post and President Richard Nixon over the Pentagon Papers. Plus a script by "Spotlight" screenwriter Josh Singer. Yeah, I think the Oscar's gonna take notice. (January 12)