Autism Trail seeks to break down barriers to deep nature

“What do you like about this trail?” Abida asked him. “The rocks? The trees? The benches?”

Ali is 14. He has autism and is minimally verbal. He and his mom live in Albany. It takes them about four hours to drive to Letchworth, but they wanted to see the soon-to-open Autism Nature Trail — also known as the ANT.

After watching her son enjoy himself in the company of strangers, calmly looking at the trees and up at the sky, Abida said she once thought this kind of moment was impossible.

“I was always so hopeless before this project started, thinking that he was never going to do much in the world,” she said.

But she didn’t give up.

Abida had noticed a pattern in her son’s behavior over the years. Deep nature calmed her son.

When Ali was 4 or 5, Abida took him on a trip to Stony Brook State Park. They went to a playground near a stream, and Ali was drawn to the water. They went for a hike, and to Abida’s surprise, Ali liked it. She said he smiled, watching each cascade and waterfall as they reached them along a trail.

When Ali was 7 — a time when Abida said her son barely spoke and was constantly agitated — she brought him to the Gibsonville Trail in Letchworth State Park. Ali immediately took to that area, too.

“He just calmed down, started throwing rocks, he was giggling and laughing,” Abida said.

It was that experience at Letchworth that set off a chain of events that no one expected.

Abida told her mom, Pat Strobel, about the afternoon.

Penman was so moved by it that she told another neighbor, Susan Herrnstein.

“She put down what she’s doing," Penman said, "and she said, 'Isn’t that interesting? I have a grandson who lives in New York City who loves to visit me because I take him to Letchworth State Park.' That was the click that said, 'There's something here.'”

Those conversations sent Penman, Herrnstein and advocate Gail Serventi down a rabbit hole of research, eventually leading them to Temple Grandin, a famed scientist who has autism. Penman said Grandin’s advice provided the tenets that led to the trail’s creation.

“She explained that we needed to be in deep nature, and resist the people who wanted us to build it closer to populations,” Penman said. “We resisted that because we knew that if this was going to work, it needed to be a model for others. And it needed to be in one of the best state parks that we could possibly offer.”

That brought them back to Letchworth. 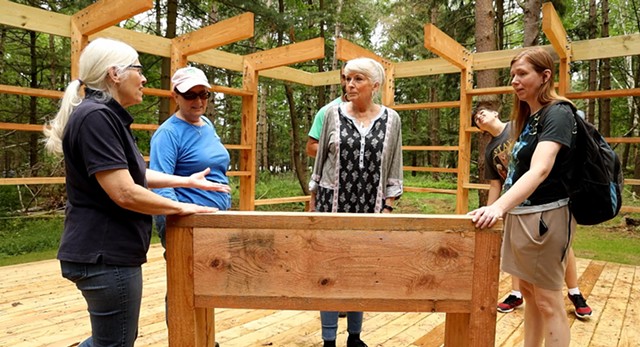 In 2013, Erik Kulleseid, then with the Parks and Policy program for the Open Space Institute, was already assisting New York state in a fundraising effort inside Letchworth for the creation of the Humphrey Nature Center.

In its 40-year history, the New York City-based nonprofit has helped groups and governments permanently preserve 151,000 acres of land in New York state and more than 2 million acres of land in other parts of the country.

While working on the Humphrey Nature Center project, Kulleseid said he heard murmurs about an autism trail and eventually met with Penman. He said supporting the effort was natural.

“We saw this as an opportunity to offer something to the ASD (autism spectrum disorder) community while also offering something to the neurotypical population, for them to experience autism through proximity … in an atmosphere of tolerance and coming together rather than separation,” said Kulleseid.

He said the effort was going against the grain because outdoor experiences have been met with trepidation by many family members of people with ASD who are concerned their loved ones may become frightened of new people and situations.

The trail’s founders are well aware of that. From the start, they surrounded themselves with experts, including an advisory panel of academics, families, and special educators. They also partnered with the Perry Central School District and the Family Autism Center. The center operates Camp Puzzle Piece, an outdoor experience made specifically for people with autism.

By January 2019, Penman, Serventi, and Herrnstein announced their plan to raise $2 million for the trail. Kulleseid was there, too, but with a new job: New York State Parks Commissioner.

He said one of his priorities as commissioner is embracing the broadest range of New Yorkers possible.

“Because barriers to parks are not just physical,” Kulleseid said. “Anyone can get in the car and drive it to our parks. But some of the reasons that people can’t go is because of lack of transportation or they’re concerned whether they’ll be welcomed there. They’re not familiar with the landscape. Maybe they’re worried that they won’t see people like themselves there. The Autism Trail is part of that.”

Two years later, the group has raised $3.2 million and hopes to raise another $500,000. The money helps pay for the construction, and some of it is expected to be a part of an endowment operated by a nonprofit. In early 2021, they announced a partnership with New York state.

Penman spends several days a week overseeing every element of the mile-long trail. It’s beyond compliant with the Americans with Disabilities Act. Everything, from the type of stone laid on the steps, to the engineered wood fiber that lines the paths, to the repeated patterns of three throughout the park, was handpicked with neurodiversity in mind. Each of its eight stations offers a different experience and a place to escape if a person needs a break.

When the trail opens this fall, Penman hopes it connects with visitors like it has with one of its inspirations — Ali Abida. 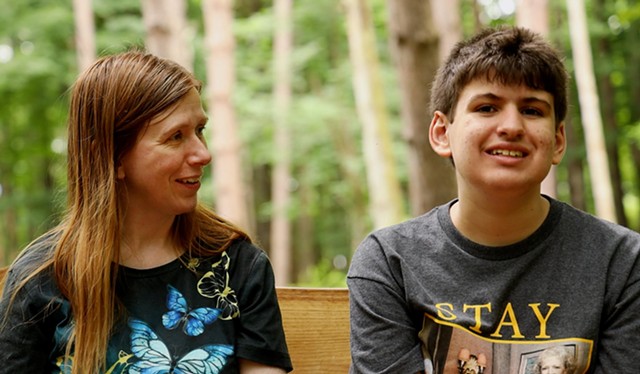 His mother, Catherine, couldn't be prouder of her son’s impact on this corner of the world.

“I think of all the lives his story is going to affect, and I just feel really proud that his story inspired something this wonderful.”

This story is reported from WXXI’s Inclusion Desk.