At the end of the signal chain 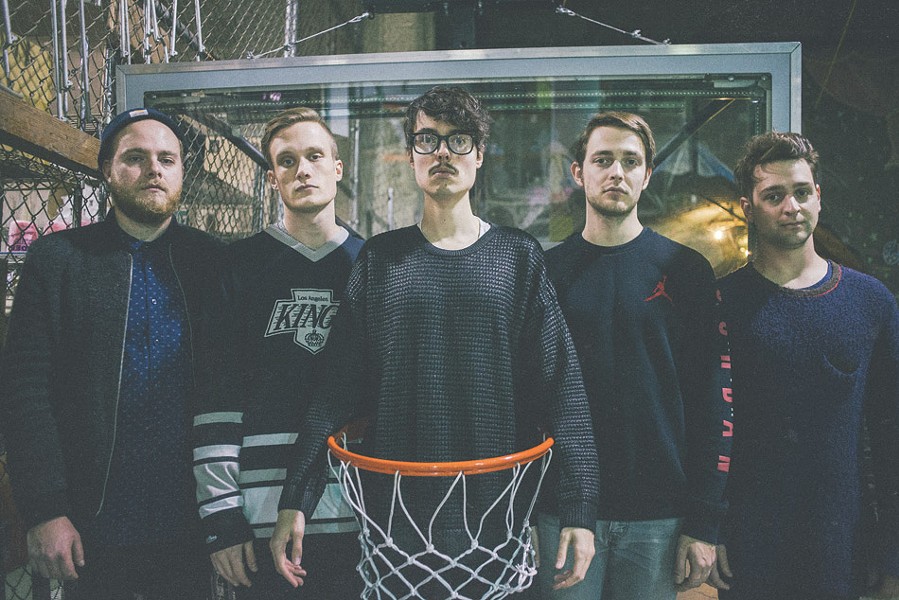 PHOTO PROVIDED Joywave, which released its debut full-length album, "How Do You Feel Now?" last April, is now out on its first headlining tour and will perform at Anthology on Saturday, October 10.

If new wave were made of something more substantial, less-plastic, then perhaps you could call Joywave a new wave band. But with its layered pulse and drive as well as its lofty vocals over a lush electronic bed, this Rochester-gone-big-time band transcends the quick answer and the lazy pigeonhole. In its relatively short history (est. 2010), Joywave has shot to the top with a bullet as it forged its own sound with several mixtapes and its 2012 EP debut, "Koda Vista." Guest work with artists like Big Data haven't hurt either: The Big Data tune "Dangerous," featuring Joywave singer Daniel Armbruster went to No. 1 on the U.S. Alternative charts in 2014.

Joywave has just released its debut full-length, "How Do You Feel Now?" on Hollywood and Cultco Records and is embarking on its first headline tour this fall with a stop on Rochester to play for the home crowd, and a couple festivals in Europe. We talked online with Armbruster at 30,000 feet somewhere over the Atlantic. Here's what was said. An edited version of that conversation follows.

City: You've worked a lot on producing stuff in the past with a MacBook Pro. But your new sound is bigger and more involved and created in a more traditional studio. What was the first indication this was happening?

Daniel Armbruster: This is the first time we ever had a budget at our disposal, so spending a good chunk of that on creating a more traditional studio experience for ourselves was a no-brainier. We actually decided to sign where we did (Hollywood Records) specifically because they allowed us to produce the record and build a studio.

Talk about the studio you built.

The building had been a studio dating back to the 80's, I believe, but in recent years it had been used to house equipment for some of Mastodon's touring crew. We were really fortunate to get the building that we did in Rochester. The timing just lined up really well. Those guys were ready to give up the space and we were ready to take it on. We redid everything gear-wise inside the building. Only the exterior is unchanged. There were a lot of classic pieces of gear we'd always wanted and had used software emulations of but had never been able to afford. A few of our favorite pieces are Universal Audio's LA-2A, the BAE 1073, and a Tube Tech EQ based on the old Pultec models — which I actually physically touched for the first time a week or so ago in the room where they recorded "Pet Sounds" at EastWest in L.A. Crazy place.

You've said "How Do You Feel Now?" discusses expectations versus reality. Discuss ...

All the songs on "How Do You Feel Now?" were written between 2010 and 2014. I had graduated college midway through 2007 and found myself in this situation that I think a lot of people have experienced where you're expecting to start your life and have the things that supposedly come along with an education, but they're just not available to you. I began to accept that my life wasn't going to play out like my parents' had.

I remember this project I had to do in 7th grade health class where we were supposed to cut out pictures from magazines that represented where we thought we'd be 10 years from then. We had to pick out a spouse, a car, a house, and a job. I didn't have any of those things by the time I hit 17th grade.

How has your sound changed?

I think this record is a bit more live than "Koda Vista" or our mixtapes. Really that's a product of having a studio at our disposal though. If we had had the equipment we have now all along, a lot of those elements probably would have been present sooner.

How has it remained the same?

The end of the signal chain was still a MacBook Pro.

What is the songwriting process?

It's pretty straight forward. I do most of the songwriting; I'll usually demo a song out, then Sean [Donnelly] and I refine it and produce it together in the studio. Some songs end up quite a bit different from where they began, some stay true to their original form. The demo version of "Bad Dreams" and the one on "How Do You Feel Now?" are almost identical.

You've flirted with new wave in the past (with the band Vice Grip). Is that still the case?

I've flirted with a lot of people. That's one of our favorite eras of music for sure, but I think that we take elements of many different sounds and apply them in a way that conveys our story and fits our songs the best as opposed to copying something that already happened 30 years ago.

Had other labels courted you?

We had an offer at the same time from a very small Brooklyn indie label, but we had talked to so many labels between 2010 and 2013 that we just became disillusioned with the whole process. I think we talked to someone from every major label at some point, but no one actually offered us anything until "Tongues" went up on SoundCloud and got like 100,000 plays or something like that in a week. That's when everyone came calling, but it was a lot of the same people who had repeatedly told us "no" for years, so it was pretty easy to say "no" back at that point.

How do you feel about embarking on your first headline tour?

Great. Headlining is a different animal, but it's nice to know that you're not preventing people from seeing their favorite band as the opener anymore. We did two shows with The Killers last year and someone yelled, "I'll pay you guys $100 to get off stage right now," before we even played our first note. I didn't hear anything after that, so I'm assuming he spent that $100 at the Joywave merchandise table after our set.

What's next for Joywave?

Tour, tour, tour. Back in Rochester on October 10 as part of our headline run. Hoping to have enough time to hit Pour and Fuego that day. Long term, we'd love to purchase that building with the flying saucer on it to use as our next studio. Maybe replace Kodak as the city's largest employer.

We're looking to start a compound studio-work-living space for our label, Cultco, with our friends in KOPPS (who will be opening the October 10 show) at some point as well. Maybe by that time, Medley Centre will be available. "Cultco Center". What do you think?