Forty years on, The Dead Boys still loud and snotty 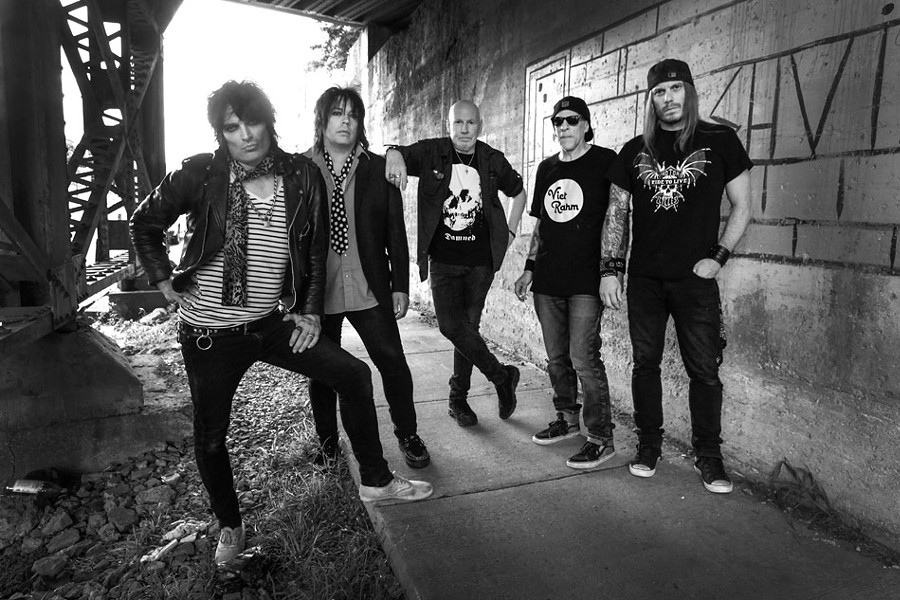 With Rotten UK, The Emersons, The Grinders, and Governess

The late-1970's was huge for punk as it raged against corporate rock and its own conception, and was blasted into the mainstream. Bands like Iggy and the Stooges, the New York Dolls, and the Ramones were getting picked up by major record labels, and the media began to notice.

Amid a year of seminal album releases — the Ramones's "Leave Home"; the Sex Pistols' "Never Mind The Bollocks"; Elvis Costello's "My Aim Is True" — Cleveland's The Dead Boys in 1977 released the apropos "Young Loud and Snotty," which contained the punk anthem "Sonic Reducer."

On stage, The Dead Boys were a punk rock spectacle, with front man Stiv Bators slashing himself with a mic stand, spitting, writhing, and eating his own snot while Cheetah Chrome brandished the guitar like an axe murderer amidst the chaos. The kids went wild. But the band's label wanted The Dead Boys to tone down the vulgarity and bombastic lewdness to appeal more to straighter audiences. Nothing doing. Bators sabotaged the recording on the planned follow-up record by singing off-mic. A couple of reunions notwithstanding, the band split in 1979.

After The Dead Boys broke up, Bators formed the Lords of the New Church before being fatally hit by a car in 1990. Chrome soldiered on in Cheetah Chrome and the Casualties and a newly reformed version of his first band, Rocket from the Tombs.

"Young Loud and Snotty" was 40 years ago. Not to be relegated to that of a punk rock footnote, Chrome has reformed The Dead Boys with original drummer Johnny Blitz. And with a brand new re-recording of the band's first album, The Dead Boys are hitting the road.

CITY: You're back. Is this the right time for a Dead Boys reunion?

Cheetah Chrome: You know, I think so. It's the 40th anniversary of the first album, and next year will be the 40th for the second album. I can't think of a better time.

Did you think you'd still be here talking about it 40 years later?

I can't say that I did. We were told it was a flash in the pan; that it was gonna die. I believed in it then, but didn't think it would last this long.

Punk saved rock 'n' roll before. Is it time for that again, and are The Dead Boys up for the challenge?

Well something's gotta save it. The kids aren't getting into it like they should. But lately we're getting a lot of kids at the shows now. I'm happy to see that. They seem to want to keep it alive, and as long as they do, I'll be there to play it.

Describe the musical landscape in the 1970's when The Dead Boys arrived.

It was the late-1960's and early-1970s; there was a lot of good music coming out, but it was starting to stagnate. The punk rock that came out of that had a bit more anger in it because the world changed. It was a pretty dismal scene back then. It wasn't good.

What was unique about the band?

Humor was one of things we definitely brought. The first time through they treated us a little more serious than we wanted them to. There was a certain amount of gang mentality. We weren't pretty or polite or anything like that. We tried to make the situation as best as we could.

How are punk fans different today?

Well, they're a little chubbier, a little more well-fed than we were... we were skinny, little lost puppies. We were mongrels. Kids are smarter now than we were back then.

Why re-do "Young Loud and Snotty" instead of something new? Was it unfinished business?

We wanted to do something special for the anniversary. Our initial plan was to have a box set of masters, but that got held up. We were touring and thought we'd like to have something different. We never got the opportunity to go into the studio and record it again — like we were told we would. The original album is really just a demo and didn't sound like how we heard it in our heads. But I have no regrets over that. I still think it's a great album. We don't have all the original members, but we've got some new guys that are just as good for what we wanted to accomplish. I love this band.

Are you writing any new material?

We've got a ton of new material. I was working on a solo record and that kinda got put on the back burner because of this.

Do these songs fit The Dead Boys format?

As far as I'm concerned they do.