It was a hot and sticky July night as a group of people began congregating in Photo City's parking lot for Sinn Fest. This was a curated punk show and birthday celebration for Rochester punk impresario James Von Sinn, who also hosted the night.

The growing crowd included Von Sinn's friends and a rag-tag gaggle of like-minded iconoclasts, dressed almost uniformly in black leather and denim. Their hair was a study in danger and Aqua Net. And they chatted loudly beneath a plume of cigarette smoke while loud, old-school punk rock blasted out from the chilled air inside.

As long as musicians around the world have been getting loud and snotty, punk has had a toe hold in Rochester's music scene. That scene has included bands like New Math, Absolute Grey, The Presstones, and Claude Rains in the late-70's and early-80's. And over the next decades, bands like Dog's Life, The Thundergods, The Quitters, The Priests, and The Shop Class Squares popped up.

Punk rock has become its own self-sustaining, self-defining, self-made entity. Born out of rebellious necessity in the mid-1970's, punk stood up to bloated corporate rock and the equally bloated white picket America, all while grappling with its own identity.

From the start, punk had the rebellion, the defiance, and the swagger and sex appeal that was rapidly draining out of rock music's wounds. Rock was left in danger of becoming obsolete, or worse yet, extinct. Punk offered a transfusion. It was a glimpse in the rearview for those who had forgotten why they loved rock 'n' roll in the first place.

Today, punk faces that same extinction, and Rochester punks — and adherents abroad — face new challenges, from inside as well as out. Are they ready for what's coming? Can punk save itself like it saved rock 'n' roll? Or is punk dead?

"No," says Will Carroll, publisher of the wildly popular scene 'zine National Teenset Outsider. "It never was and it never will be. As long as there are kids that want to destroy things, it'll be OK."

Teenset Outsider is a classic, cut-and-paste 'zine. But with a push from social media and the Internet, Carroll ships it worldwide, putting Rochester punks and the scene here on the global map.

Jesse Amesmith, singer and guitarist for the band Green Dreams, views punk as a flexible entity in Rochester. Sometimes the message and the sound get a little diluted, she says, but it's not dead — it's just going through some changes.

"I consider it dead, actually," he says about Rochester punk ... right in the middle of a punk event. And the irony isn't lost on him. That happens a lot when talking about punk: it's not punk rock to dwell on punk rock. To some it's like talking about Fight Club. You just don't.

So punk is dead, Von Sinn says. But in the next breath he exhibits hope. According to Von Sinn, there's a small group that wants a reincarnation.

"They want it," he says. "But there's nobody creating it." Although, Von Sinn is: he promotes shows, networks with bands, and fronts the doom-laden punk outfit Rotten UK.

"I'm trying, yeah," Von Sinn says. "But I still see more people get out of it than into it. I think there's too much of a history to live up to. There are stories about how it once was and they have all these expectations. And it falls short sometimes. And then there are people that don't care one way or another, because they love it."

Rochester had the good fortune to be close enough to New York City, one of the hotbeds for punk's birth. And when the first wave of punk bands began to hit the road, bands like The Ramones, The Dead Boys, X, The Rockats, The Cramps, Lords of the New Church, and Jim Carroll frequently blew through town to play clubs like Scorgie's, The Penny Arcade, Backstreets, and Casablanca.

That was almost four decades ago. Back then there was slightly more animosity, more participation, more excitement, and more mess. Roy Stein, the drummer for New Math, recalls his first gig with the band.

"It was late-1979 at the Penny Arcade," he says. "The bartenders wore 'Punk sucks' T-shirts. We drew 400 people on a Monday night. The bartenders passed out eggs and they threw them at us."

Stein saw this vilification as vindication. "I thought it was hysterical," he says. "I was behind my drums laughing so hard I could hardly play. I still have a poster from that night with egg on it. I thought, 'This was beautiful.' I think it's harder now to get a reaction at that level."

The grassroots, do-it-yourself mentality that is part of punk's calling card isn't just enacted by the bands here; it has been implemented by club owners, like Danny Nielsen, who re-branded and re-opened Photo City on Atlantic Avenue as a punk club two years ago. Just like a band hanging its own show bills, Nielsen retro-fit the joint to become a cool hang for punks and a place for punk bands to play.

In the days and weeks that preceded the club's opening, Nielsen was living lean and mean, not eating, and sleeping on the floor in the club's green room. He didn't do laundry for weeks. 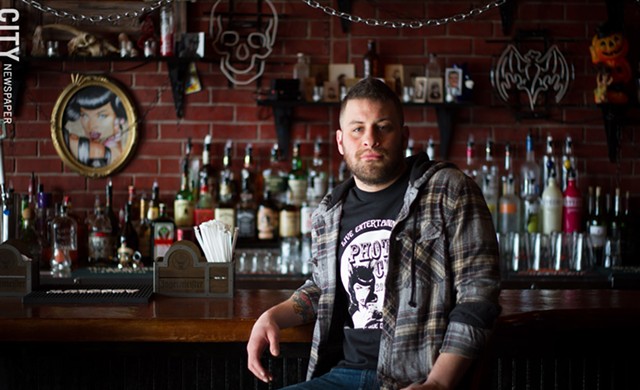 "I just put on whatever wasn't rotting on my floor," Nielsen says. He even had to borrow a few bucks just to pay the performer's opening night. But he built it, more or less, and they came. Local artists like The Emersons and Trevor Lake have played there along with punk icons like the Dead Boys, Murder Junkies (G.G. Allin's band), and Lydia lunch.

The Sinn Fest party outside Photo City slowly makes its way indoors as the whack of drums and the scream of guitar indicate the first band, Barbaryan's arrival on stage. Most of the Buffalo-based band remains there while the singer seethes and rages and prowls about the floor in front of the bandstand. The band is rough, raw, mesmerizing, and extremely loud as it blows through a set of rather short and urgent punk salvos.

Barbaryan performs like a preamble to a fight. And the audience joins the band in a sort of flailing tempo-tantrum where the line between the two groups is completely blurred.

Initially, "punk" was a media label for the hi-jinx, impish behavior, and ragamuffin appearance of these upstarts. Some folks didn't get the joke. And they still don't. Johnny Rotten once said of musicians inducted into the Rock & Roll Hall of Fame: "It isn't the clothes they wear, it's what they did while they wore them."

Later on, the term became more of an adjective, serving as an accusatory finger directed disapprovingly at the violence, chaos, left-wing political leanings, and the anti-establishment ideologies held by many punks.

Sonically speaking, original punk's sound is loud, fast, rude, and defiant, if not economical; a typical punk tune will get the job done in less than three minutes. Von Sinn says it was originally meant to be for, by, and about disenfranchised kids.

"Punk's a 21-and-over crowd, now," he says. "It used to be a youth movement but nobody's giving these kids a chance. So when I see these teenage punk kids playing and they're good and they're tight and they're into the stuff the older kids are into, I'm like, 'Come to Rochester. We'll give you a chance.'"

Nielsen sees punk rock as a defiant buck up against the system. Yet by supplying, as many local clubs do, a place for these bands and their fans to go, he has discovered he is part of the very system punk rails against.

"No shit," Nielsen says with a laugh. "I've realized that lately."

Despite his punk-is-dead belief, Von Sinn embodies punk body, heart, and soul. He's not quite ready to call T.O.D.

"It's all I know, first of all," he says. "And I still believe in a concept where there can be a community of people that can change things, inspire, be uplifted, be ourselves and be a family.

"I thought, 'What's the appeal of punk for the younger generation?' To them it was a bunch of older guys acting like snobs standing around who were too cool for anybody."

Von Sinn is hoping for more. He wants the younger kids to look past the cool posturing, and instead look for something political to align themselves with. And with the current federal administration, it's not hard to do.

"We're in a state of needing that," Von Sinn says. "All that stuff they talked about in the 80's is happening now."

Amesmith points out the positive in the fact that while these are bad times, good art comes from pain.

"People are angry because the whole world is falling apart," Amesmith says. "We're in the end times and I think people here are looking for ways to express that. I think punk is just getting started."

There is a call for punk rock in Rochester being answered by musicians, some of whom weren't alive when Joey Ramone died. But they still manage to break out with the righteous anger and all that goes with it. There is a steady legion of punk bands in town, especially when you include punk spin-offs, like hardcore, emo, and noise rock. 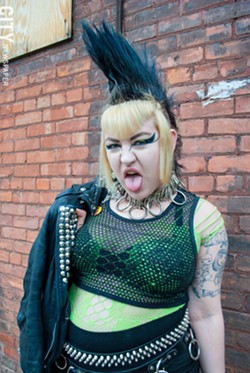 Punks will tell you it's not a fashion trend, even though there seems to be a loose dress code that sometimes applies. A good deal of the audience at Sinn Fest looked like something out of "Mad Max."

"I think punk rock is more of a lifestyle, an intention rather than a sound necessarily," Amesmith says. "I love heavy bass and drums and guitar, loud, fast — what you think of when you think of punk rock music. Sound-wise it isn't for everyone. Something is punk when it doesn't try to appeal to the middle. You have to blast into it or collide with it. Indie sort of cleaned up things for a while but I feel there's a return to lo-fi."

At well over 6 feet tall, tattooed, and dressed mostly in leather, Von Sinn is a towering vision of punk. He, like most punks, consider it a statement — just not a fashion statement.

"When punk becomes a fashion statement it becomes a product," Amesmith says. "And people are like 'I'm a punk because I look like this.' But that's hollow. It's all aesthetic and now there's a need for substance. Now it's easy to assimilate, to talk the talk. It's easy to look like you belong. We have easier access to a sub culture to where it's just culture. There's no 'sub' anymore. Punk's dead. Punk's not dead. Meh."

But talking the talk isn't all that bad for Stein; it gives him hope.

"I'm glad kids are saying 'punk is dead,'" He says. "Because it tells me they can still say 'fuck you.'"