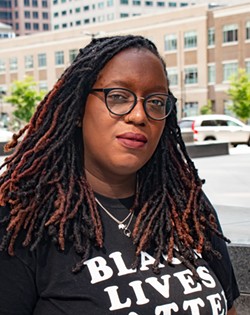 As a student at East High School all those years ago, Ashley Gantt didn’t know there was a word for her penchant for sticking her neck out for classmates in trouble.

“When I was in high school or middle school, I always was in other people’s business to the point where, like, if somebody else is getting into a fight, I’m taking up for that person,” Gantt says. “Now, I know the word is advocacy.”

Gantt, a 34-year-old organizer with the local chapter of the New York Civil Liberties Union and self-proclaimed “big mouth,” grabbed headlines this summer when she declared of the chaos that ensued after the Black Lives Matter march on May 30: “I don't care if the whole city burned down. We need justice, and that is the story that needs to be told.”

She was back in the news this week, when she helped mobilize the demonstrations in response to the death of Daniel Prude, and was arrested on a charge of criminal trespassing for attempting to access a Mayor Lovely Warren news conference at Rochester Police Department headquarters that was reserved for credentialed media. The charges were dropped Thursday.

Two months after her incendiary remarks about the city burning, from her apartment building overlooking the Liberty Pole, that all-American symbol of political protest, celebration, and patriotic pride, Gantt says she regrets her choice of words but not the sentiment behind them.

Hear her, Rochester did.

She became a prominent public face of the local Black Lives Matter movement, a role she has embraced in the spirit of Black leaders before her whom she regards as her influences — Harriet Tubman and Malcolm X — and has expanded as a co-founder of Free the People Roc, a collective of activists at the forefront of the racial justice effort in town.

“Of course I don’t want folks to set the city on fire,” she says. “But I do want people to understand that when we talk about movement, and we talk about sustainable change, sometimes, we have to do whatever it takes to get it.” 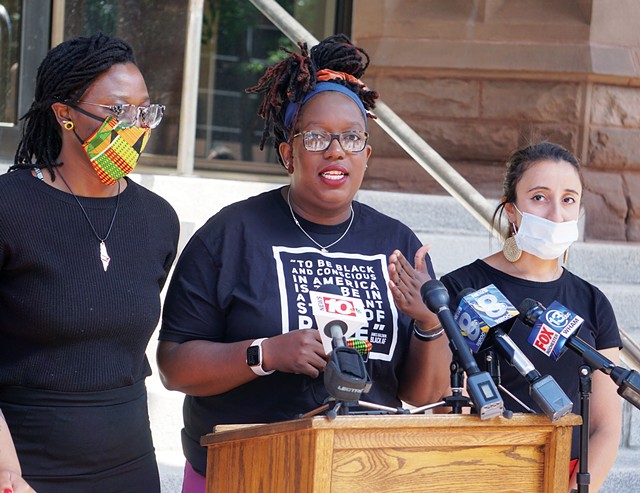 Gantt has been advocating for change professionally for the better part of the 10 years, from rallying fast food workers to fight for a higher minimum wage and helping refugees navigate the court system to pushing for bail reform. That activism led her to the Genesee Valley Chapter of the NYCLU.

“These days, you wouldn't know that I have a day job because Free the People Roc takes up a lot of my time,” she says.

Her elevated public status often fuels speculation that Gantt is a relation of David Gantt, the late powerful and cantankerous state assemblyman whose decades of public service inspired a generation of Black activists and political operatives.

“No, I’m not,” Gantt says with a smile that suggests she is answering the question for the millionth time.

Gantt was born in Rochester and grew up in the foster care system before being adopted by her parents when she was around the same age as her 10-year-old daughter, Katelynn Olivia.

Parenthood has a way of putting life into perspective for some people, and so it was for Gantt. She was the mother to a toddler in 2012 when news of the killing of Trayvon Martin made headlines. The thought of a child being gunned down struck a chord with Gantt who found a release in organizing community rallies. Her efforts were eventually noticed by advocacy groups like Refugees Helping Refugees and Metro Justice, where she later landed work.

Despite the hectic summer and a seemingly never-ending conveyor belt of causes to fight, Gantt makes time for motherhood. Lately, she has found herself turning down engagements in favor of family time, specifically hiking. In the midst of the summer chaos, she and her daughter embarked on a mission to hike every state park.

On Sundays, Gantt grounds herself in her church. Though she’s left behind some of the more traditional rules of her religious upbringing — for instance, she wears lipstick and has pierced ears, and doesn’t exclusively wear skirts and dresses, like she did until she turned 20 — she holds fast to her Apostolic Pentecostal faith.

“And I do this work not just because, you know, I’m passionate about it, but I feel called to it.”

Renée Heininger is CITY’s digital content strategist. She can be reached at renee@rochester-citynews.com.