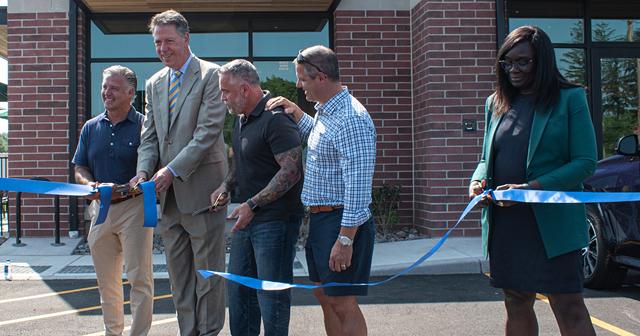 The most controversial Starbucks in Monroe County opened Friday near the Brighton-Pittsford border, off Interstate 590.

The coffee shop and the Whole Foods Plaza it's part of has been in the midst of a costly legal fight for a half-decade. The designs for the plaza were submitted to the town seven years ago and have been a point of contention ever since.

Brighton Town Supervisor Bill Moehle said Friday that the litigation has cost the town more than $100,000 in legal fees and developer Anthony Daniele said his family has spent more than $1 million on the lawsuits so far. Earlier this year, a judge ruled that the Daniele Family Companies can build “at their own risk.”

Work on the rest of the plaza is ongoing, with a strip of shops on the property due to open by end of the year. Daniele said he can’t reveal who will occupy the space but said it will include retailers and a gym. The foundation of the new Whole Foods is being laid now, and the store is expected to open toward the end of next year.

Daniele and the town of Brighton have faced a number of complaints from three groups: Brighton Grassroots, Save Monroe Avenue, and Brighton’s Allens Creek Neighborhood Group. They claim the project is too big, is breaking Brighton’s zoning laws, and will cause more congestion in the highly trafficked area.

Daniele said the town has addressed traffic concerns and called the complaints a ruse.

“I don’t think that there’s a genuine concern among the folks who are filing lawsuits that traffic is the problem," Daniele said. "I think their concern is that Whole Foods is coming to Rochester."

Moehle said the town and the developers are winning in the courts. He said the town expects the completed plaza will generate $400,000 in taxes a year.

“I don’t want to ignore the elephant in the room,” Moehle said at the ribbon cutting, ''There's still litigation pending, it's frivolous litigation brought by a competitor.”

When asked who the competitor is, he said it was Wegmans, who admitted so in a statement last year. Wegmans’ Pittsford Plaza location is a few blocks away. WXXI News asked Wegmans for comment, and the company has not yet responded.

“They (Wegmans) have funded the groups that have brought what is frivolous litigation and judges hearing the case have repeatedly refused to block construction of this project,” Moehle continued.

Howie Jacobson, who leads Brighton Grassroots, one of the groups suing over the project, said three different judges have presided over the case because it's been in the courts for so long.

Jacobson admitted that Wegmans is one his backers but said his opposition has nothing to do with competition between Whole Foods and Wegmans. He said he’s not against the concept of a Starbucks and a Whole Foods in Brighton or even at that location. Jacobson said he’s against the size of the concept and the congestion it will bring.

Jacobson claims that the town and Danielle are using their lawyers to prolong the litigation.

Jacobson said a hearing for the case is scheduled for later this month.