March 16, 2020
It is a Thursday morning and Amanda Calieri, a server at the Genesee Brew House, is home sick with mononucleosis. After 11 years in the service industry, Calieri knows that taking a sick day is a gamble.

“In most places I’ve worked at, the first thing you have to do is find someone to cover your shift, and if you can’t do that, you need to get a note from a doctor to prove you’re sick,” Calieri said. “That visit could cost me $200, but if I don’t get it, I might be risking my job.”

Prior to Monday, when Genesee temporarily shut down its pilot brewery and Brew House in compliance with a state directive to combat the coronavirus pandemic, Calieri was also missing out on wages and tips. She hadn’t been receiving paid sick leave, though the Brew House offered paid leave to workers, including Calieri, after suspending operations.

Calieri’s experience punctuated a reality for many part-time workers — if you’re sick, you go to work, because calling in means not getting paid and may even run the risk of losing your job.

But the forced closure of restaurants and bars across New York has heightened awareness of the issue of paid sick days for part-time workers. New York currently has no laws requiring employers to provide paid sick leave.

Before coronavirus hit, Governor Andrew Cuomo had been urging state legislators to pass a bill that would require employers with more than five workers to offer them a minimum of five paid sick days. “It's good for employees, and it is good for business,” Cuomo said.

Now, he’s also asking the legislature to pass legislation requiring employers to provide paid leave of up to 14 days for any worker who has to go into quarantine due to coronavirus — the standard quarantine length recommended by the Centers for Disease Control. Anyone who has the virus is subject to quarantine and anyone who shows symptoms is supposed to self-isolate.

According to the Bureau of Labor Statistics, 29 percent of private industry employees across the country had no paid sick leave in 2018.

In the age of coronavirus, even veteran full-time employees at large companies aren’t likely to have enough sick days to cover a quarantine. Employees who’ve spent more than 20 years at companies with more than 500 workers have, on average, 10 paid sick days, according to bureau data.

“All of these basic benefits like living wages, paid sick leave, paid time off, or vacation time are all but unheard of in the service industry,” said Mohini Sharma, lead organizer with Metro Justice. Sharma began her activism work as a result of years working in restaurants and bars.

While Cuomo is working with the legislature to pass paid leave laws, some local businesses, large and small, are not waiting for Albany to act. Both Ugly Duck Coffee and Dinosaur Bar-B-Que issued statements last week announcing a new paid sick leave benefit for workers.

With just eight employees, Ugly Duck co-owners Rory and Cris Van Grol said that paid sick leave is a benefit they have wanted to offer. The coronavirus pandemic was a catalyst to push it forward. 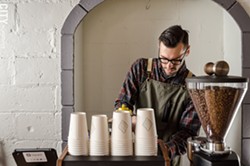 “We had to think about what happens if we don’t take care of our team, if they don’t feel healthy and supported coming into work,” Rory Van Grol said.

All employees at Ugly Duck will start with 30 hours of paid sick leave. With shifts typically clocking in between five and a half and six hours, 30 hours works out to a typical work week.

The Van Grols see the decision and associated expense as necessary for the well-being of their employees. But the future during the pandemic remains daunting for them.

“What happens if we have to close? How long can we support them if we have no income?” Cris Van Grol said. “We have to think about these things.”

Meanwhile, Chuck Cerankosky, who runs Good Luck, CURE, Lucky’s, and the Jackrabbit Club event space, said he reassured his employees that their jobs will be secure if they take sick days.

“We don’t want people worried that if they take a day off that they’re going to lose their jobs,” Cerankosky said. “We want them to feel safe taking as much time as they need, and that their job will be here when they get back.”

His employees don’t receive paid sick days, but if any of them have to go into mandatory quarantine they’ll receive paid leave, he said.

“If that’s what happens then, yes, of course we’d do that,” Cerankosky said.

To Sharma, the reality that many workers face economic insecurity due to the pandemic serves as a sobering example of gaps in the country’s social safety net.

She argues the means exist to strengthen that safety net, pointing specifically to a Federal Reserve proposal, announced last week, to inject $1.5 trillion into the market to combat the fiscal impact of coronavirus.

“It’s obvious we have the money to support things like ‘Medicare for All,’ like social safety nets for our workers,” Sharma said. “The money is there, the will isn’t.”

Over the weekend, the U.S. House of Representatives passed legislation that would require companies with fewer than 500 employees to provide their workers with two weeks of paid sick leave if they have to stay home due to the coronavirus. For full-time workers, the sick leave pay would be capped at $511 per day. Part-timers would receive a typical week’s pay for up to two weeks.

The benefits would last for one year. The bill was headed to the Senate and was supported by President Donald Trump.

For now, though, many service workers are still in a compromising position. They need to pay the bills and will still have to choose between calling in sick or earning a day’s wages, and possibly tips. If they end up in quarantine, they won’t have that choice.

Calieri was scheduled to go back to work on Tuesday, but that got delayed by the Brew House’s shutdown. She said the lack of benefits for part-time workers has become “normalized” across the country.

“It comes with the business that it feels like servers are very replaceable, that anybody can be a server,” Calieri said. “That if you don’t show up to your shift, for whatever reason, they’ll find someone who will.”