Your artists at work

June 02, 2021
Here’s the question for Missy Pfohl Smith: What prompted the creation of the ARTs + Change Conference?

Worldwide, it’s the rising tide of polarization, and social media’s role in it, she says. Closer to home, it was the death of Daniel Prude — a man in the midst of a mental health crisis — at the hands of the Rochester Police Department “that sparked all the protests and brought up the problems that have been happening here for a long time, but really became acute in that moment last summer,” says Pfohl Smith, who organized the conference.

“And then also, of course, here we are, in these really raw moments for our students and our community members, and yet we can’t be together, we are separated.” 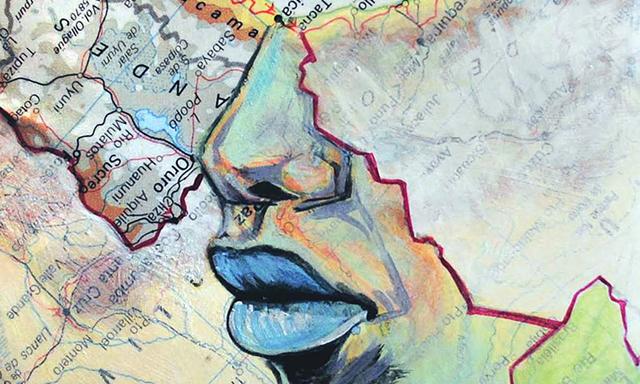 ARTs is an acronym for Activate, Reimagine, Transform. Much of the conference’s four days, from June 3 to 6, will be focused on racism, and bias in general — including institutional and cultural bias against disabilities and the barriers between communication. ARTs + Change is about addressing privilege and marginalization. Advocating for equity and justice and citizenship.

“There’s not one thing,” Pfohl Smith says. “There’s so many things, right?” So many things, addressed by the conference through multiple arts disciplines and talks, interactive participation and performance.

“I don’t think people think of the UR as a big artist incubator,” Pfohl Smith says. “But yet there are these amazing people who are coming out of there and doing great work.”

Over the four days, ARTs + Change will present 34 sessions, 33 of them free and open to the public. The opening session is a meet-and-greet for the presenters, the kind of thing, pre-COVID, that used to happen in a hotel conference room around cocktails and hors d'oeuvres. But it’s all virtual these days.

“If we were in person we would have a reception and actually talk to each other,” Pfohl Smith says.

“Perhaps in the future, we can be together in person.”

Yet as Pfohl Smith points out, the virtual platform actually made ARTs + Change more possible. It’s less expensive for the presenters and attendees. And the infrastructure is already in place, through your computer.

“I feel the arts gives us a way to have those difficult conversations,” she says. “It gives us a forum that allows us to speak a little more safely about subjects that are personal, but can be talked about through looking at people’s work.”

All with an arts-focused eye to the uncertain future. “Post-COVID,” she says, “realizing what artists need in place to sustain their work and their livelihood.”

Some of the presenters have connections to UR, most are from around the country. There are a few from Germany, Serbia, and Myanmar. Saturday evening’s keynote speaker is Tamar Greene. A graduate of Rochester’s School of the Arts, he played George Washington in the Broadway production of “Hamilton,” until COVID-19 shut down the shows.

“He wants to talk about what it has been like for him, as a Black man, journeying through this road towards essentially opera, Broadway, a career in local performance,” Pfohl Smith says. Greene will offer some songs related to Black Lives Matter. He’ll also talk about The Hamilton Racial Justice Task Force, a group that came out of the musical to advocate for artists’ rights.

The titles of the ARTs + Change sessions often read as the stuff of heavyweight academics, with a colon in the midst of everything. But since this is the arts placed under a microscope, all must be explained. So “Questioning Todo: A Latinx Inquiry of Culturally Responsive Pedagogy” questions the “inherited, euro-centric systems of education within the U.S.” And its companion piece might be “Reframing ‘White Dance’: Folk Dance, Equity and Inclusion” — an examination of an art form that is seemingly irrelevant to today’s youth culture, but is art that still “makes up the roots of privileged culture in the United States.”

Heather Layton’s Thursday afternoon presentation is “The Aesthetics of Kindness and Human Connection: an Artist Talk and Workshop.” Layton, a senior lecturer of art at the University of Rochester, maintains in her bio that, “Despite all of the bad news in the world, she remains stubbornly optimistic.”

“During the Trump era, if we have to call it that, she made a whole series of drawings that were ways in which you could cope with what was going on,” Pfohl Smith says of Layton’s work. “So it was like all these imaginary devices that you might be able to use. Like there was a device that she drew that would widen your ears so that you could listen better, because people weren’t listening to one another.”

The conference’s cacophony of change continues with breaking up the Old White Boys Club. “Movements Keep Moving: Abolitionist and Decolonial Organizing In Our Cities.” It’s described as targeting our “cultural institutions and the settler colonial state.”

And on the final day, take a breath. Susan Daiss, Patricia Luck and Gaelen McCormick, who was a bassist with the Rochester Philharmonic Orchestra for 20 years before going deaf, will present “The Mindful Art Pause: an arts-based response to the crisis in the healthcare community.” It’s described in the program as “an invitation to take time, take a pause for yourself,” through music and poetry.

Health-care issues aside, isn’t a mindful pause something for everyone?

“They recognize that this was so needed by the health-care community,” Pfohl Smith says, “but that it’s needed in the world. And so they’re sharing it with us as well.”

ARTs + Change, she says, will “bring people together who are doing great things in the world and sharing, so that more of those great things continue to happen, you know? Like kind of thread those ideas, so that they grow.

“This is the kind of work that artists do in general, I think.”

To register for ARTs + Change, go to sas.rochester.edu/PerformingArts/artschangeconf.html.