January 29, 2021
An arts advocacy group has accused Mayor Lovely Warren of misrepresenting an outdoor mural of Daniel Prude pictured in promotional materials that complemented her recent State of the City address, in which she pledged to foster “a bold new era of public art.”

The group, Roc Arts United, wrote in a letter dated Jan. 25 that, according to the artists who created the mural, their work was “a direct response to the city of Rochester’s involvement in Mr. Prude’s death.”

“The city’s use of these images re-contextualizes the artworks and misrepresents the artists’ intentions,” the letter read. “We strongly condemn the mis-use of these artworks in this manner.” 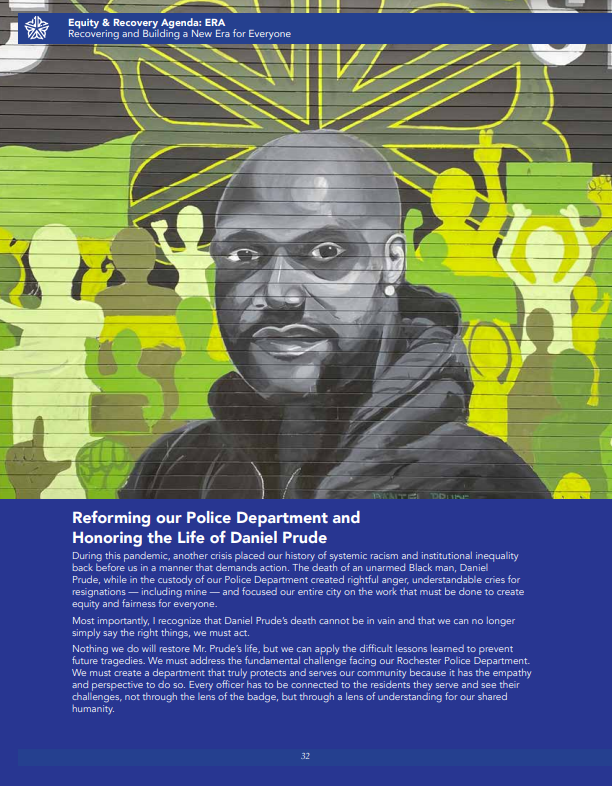 The Prude mural, which depicts a black-and-white portrait of Prude against a backdrop of yellow and green silhouettes of people protesting and a city of Rochester logo, is located at Dr. Martin Luther King Jr. Memorial Park at Manhattan Square.

A photograph of the mural was published in a 48-page booklet that outlined the mayor’s visions for the city and was a stand-in for a traditional State of the City address. The booklet was titled the “Equity and Recovery Agenda,” and the photo in question accompanied text under the headline, “Reforming our Police Department and Honoring the Life of Daniel Prude.”

The group’s letter also condemned the city’s use of a photo of the “I Am Speaking” mural of the late Rep. John Lewis on State Street because it did not credit the artists and, Roc Arts United claimed, lent to the perception that the city financed the project.

The mural was created by Ephraim Gebre, with the help of a team of artists, and was paid through a crowdfunding effort and donations.

“Equity starts with acknowledging artists,” the letter read, “and in both cases they were not mentioned or engaged.”

Since its inception it has earned a reputation as a watchdog for artists’ rights and local government’s promises to the arts community.

In its letter, the group applauded the mayor’s promise in her State of the City to revive a “percent for art” ordinance that would allocate 1 percent of the cost of city capital infrastructure projects to fund the arts.

A lot of cities have an arts commission, but one has been absent in Rochester for decades.

“As a diverse group of working artists and community-invested arts professionals we believe that we are ideally positioned to advise on the process and ensure it is equitable, accessible, and transparent,” the letter read.

A message left for a city spokesperson seeking comment was not immediately returned.