Meet three teaching artists who are shaping the next generation of creative thinkers.

The old adage, "To learn, read. To know, write. To master, teach," frames the act of professing as the epitome of a person's own education. The following profile on three Rochester-based artist-professors marks the beginning of a series on teaching artists. Read on to discover why these artists choose to teach, and the impact that their instruction — and work — has on those who study with them.

Shaking up habits of mind

Since 2005, University of Rochester professors and new media artists Leila Nadir and Cary Peppermint have created numerous collaborative projects under the title EcoArtTech. The duo deals in the kind of interdisciplinary art-making which is less about tangible aesthetics than about creating what they call "interventions" — interrupting pre-conceived ideas regarding our definitions of nature, the uses of technology, and our navigation of both.

"Our work functions in this indeterminate space, between utility and imagination," Peppermint says. EcoArtTech's projects don't promote a specific message or agenda, but instead try to give people tools to creatively imagine their lives and their futures. As a result, their art has the same aim as their teaching: to guide a widening of perspectives in their students and audiences alike.

"Ultimately it's about people coming up with their own ideas and responses to a very complex world," Nadir says. 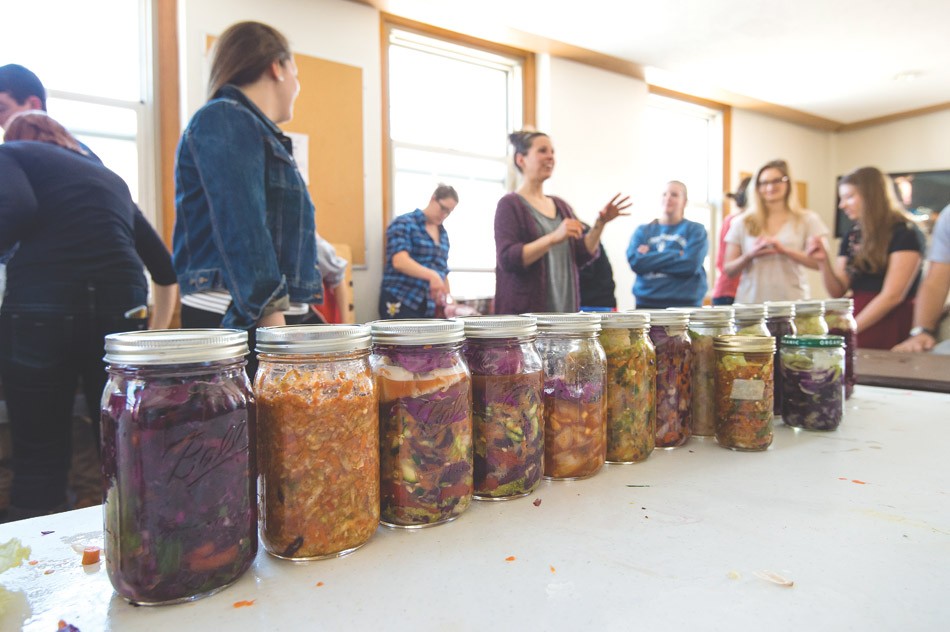 Though Nadir offers environmental humanities courses in UR's Sustainability and Digital Media Studies programs, and Peppermint is currently Assistant Professor of Digital Art, their teaching reach extends beyond your average humanities or studio art student. Nadir's student, Mary Willis, a double major in Epidemiology and Environmental Studies with a minor in Film and Media Studies, plans to pursue a Masters in Public Health, and aspires to be an environmental epidemiologist.

Willis describes how Nadir lures students from all walks with cross-disciplinary courses, and then engages student expertise to further enhance the offered curriculum. She says she was encouraged to apply her expertise in other academic fields in Nadir's Literature and the Environmental Imagination course. "My final paper for this class was actually about how certain works of literature can explain the potential environmental and health effects of hydrofracking," she says.

By tapping into Willis's love of epidemiology and environmental sciences, Nadir gained a new perspective with which she could "better explain complex scientific concepts and debates to an audience of students without that background," Willis says. "We primarily focused on two topics: how specific works of literature impact how society views the environment and how society's view of food has evolved."

Nadir also helped Willis discover a love of writing, despite being a scientist at heart, which she says helps her "effectively articulate complex scientific issues to people who have a different perspective on the matter."

New York- and London-based art consultant, curator, and writer Nicole Sansone credits Peppermint for sparking her interest in digital media studies. During the 2007-08 academic year, Sansone took Peppermint's senior art seminar when he taught courses at Colgate College. She says one of the most valuable lessons she learned from Peppermint's class was the pure and simple fact that "art disrupts a system," which he illustrated with the example of Merritt Oppenheim's visually-visceral fur-lined tea cup.

Sansone sees this system-disruption present in EcoArtTech's "Indeterminate Hikes+" app, which has been used by individuals all over the world. Participants in IH+ choose a beginning and ending point for a hike, and the app maps a route for the hiker (or group) to follow, with periodic prompts to complete tasks meant to challenge our perceived understanding of the environments. Visit the online version of this story at rochestercitynewspaper.com for an example of an IH+ that the writer took.

"Hacking a locative mobile media app to perform in almost the exact opposite way to our expectations is such a subtle move! And yet the payoff is huge," Sansone says. As a hike leader and participant, Sansone has witnessed people on an IH+ behave differently: they walk slowly, they look around more, and longer. They relax, she says.

"Both of us come from a philosophical background," Nadir says, "and we think that space of not knowing is a very productive space." The meandering hikes build on centuries of Eastern thought, specifically the concept of mindfulness.

"We're asking people, don't treat the present moment as a means to an end, just notice where you are, and be present," Nadir says.

"EcoArtTech's body of work taps into a thick vein of social ills" by asking questions about environmental sustainability, which implicates everything from labor rights and wealth distribution to institutional racism and immigration reform, Sansone says. "It's incredible how much these things are linked, and how changing your mental framework on one subject can have such a lasting impact on the others."

One of their latest interventions, "Edible Ecologies," is an ongoing body of research and a series of performance art projects that look at historic food practices before or outside of the industrial food system. This year, EcoArtTech began hosting "OS Fermentation" workshops in Rochester and other cities, which the duo describes as "collaborative hacks" between fruits, vegetables, microbes, and themselves.

"The human body is actually 90 percent microbial DNA," Nadir says. "So we're not even these individual, independent creatures that we think we are; we're actually a super organism," reliant on microbes to keep our immune systems healthy, our moods stable, and to maintain good weight.

But we attack bacteria and microbial life all the time. By resuscitating the age-old practice of fermentation, we create environments which will nurture bacteria, so it can thrive, so it can do you the favor of predigesting or of preserving your food, she says.

"Edible Ecologies" will also include neighborhood engagement tours meant to explore the way the industrial system has shaped access to healthy food, and alternative strategies that people are creating to deal with food deserts. Nadir and Peppermint are also in the process of gaining certification as holistic health coaches, and plan to open up a mobile holistic health clinic.

The rigors and knowledge of the professional sphere

"Design is a lens through which I see the universe and an interconnected part of my physical and metaphysical well-being," says Josh Owen, professor and chair of the Industrial Design Program at Rochester Institute of Technology. Owen is also president of his design studio, Josh Owen, LLC, which produces elegantly minimalist objects of utility, from sleek furniture and home accessories to clean packaging and optimally functional product display spaces.

Owen says that most people think of design in terms of aesthetics, but for him it is a lifestyle choice, born from a deep desire to craft the world from a human-centered standpoint. "Everything I do is an act of design," he says, from his priorities to his products, his meals to his methods for teaching and communicating. "If the results of this work emerge as beautiful, empathic, or effortless, this is the consequence of informed choices which stand on the shoulders of history, theory, and practice. Compelling design speaks for itself because the designer has done their job by making things better."

Former student David Strauss describes Owen's course, "Activating the Vignelli Archive," as a rigorous and demanding series of strict deadlines, from which he gained multitudes of new knowledge about the design and manufacturing field, the Vignelli's design ethos, and a portfolio piece that surpassed all others he had prior. "Learning how to intelligently design within a short amount of time was rewarding and inspiring," he says.

Because Owen is active in the international scene, his projects and the works of his students are regularly recognized in the global design dialogue. Owen "takes students out of the university setting and embeds them in the world of real design culture and business," says Strauss, who earned his Master's degree in 2013 from RIT's Industrial Design program, and is currently based in New York City as a furniture designer for a bespoke furniture showroom and manufacturer. "When students have the opportunity to be guided and paired with professionals and industry leaders in the field, it provides new and real educational benefits that cannot be fabricated in the walls of an institution."

Bridget Sheehan is an industrial and graphic designer with a focus in furniture design, earned an MFA in Industrial Design at RIT, and currently works for Wendell Castle as a craftsman in his studio. Working as Owen's Grad Assistant, Sheehan assisted with his annual Metaproject, an interdisciplinary and collaborative design course with an industry partnership, placing student output into a global venue. This fall, the project is entering its fifth year. This past year, the Metaproject partner was Herman Miller, and RIT students took part in Design Week at New York City.

"In just two years of working with him I went from a shy, first year graduate student to the right-hand of Wendell Castle, an adjunct professor of design at one of the nation's top design schools, and working as a freelance designer," Sheehan says. Through her work with Owen, Sheehan had made contacts in some of the most prestigious design based companies in the world, exhibited during Design Week in NYC, and acted as lead designer, and co-curator, for a variety of public exhibitions. "Josh gives his students opportunities that can change their lives," she says. "He puts his students in front of design legends, strives for their success, and pushes them to be the best designer possible."

Owen says his experience of studying abroad in Rome as an undergraduate changed his life and the focus of his career, and that the powerful effect of living and working across cultures is "one of the most exciting recurring moments of growth" he has witnessed. "Since becoming an educator I have made international education a cornerstone of my methods by integrating culturally relevant dialogues, developing and promoting study abroad opportunities, and actively recruiting individuals from across the world to lecture, visit, and join our ranks in many ways," he says. "In a rapidly expanding world, gathering global insight is fundamental to building future leaders."

Just as he brings global perspectives to his students, he is also open to the perspectives they offer to him. "I love to learn about new cultural perspectives that can inform my own perceptions and movements in the world," Owen says. In 2012, Owen taught a workshop to 60 students in Beijing, a trip organized by one of his graduate students. "She served as my guide and interpreter for the week we spent there," he says.

While Owen had some previous experiences with Chinese culture, he says he learned a great deal more by being immersed in academic activities with his student. "She taught me how to eat, drink, celebrate and explore sensitive issues," he says. These are all acts of design and impact greatly on the way we think about tools for living. I will always have her to thank for that."