Four young artists are the stars of "Street-ish," a show of contemporary work that is informed by street art and culture, though was created within a studio practice. Now in its sixth season, this edition of Rochester Contemporary's "State of the City" exhibition series was co-curated by RoCo's Executive Director, Bleu Cease, and Memorial Art Gallery's Director of Exhibitions, Marie Via. The smart show contains two artists who reference street art, among other aesthetics, in their two- and three-dimensional work, an artist whose strange public performances frolic playfully between the mythic and the poignant, and a sound artist who uses simple, solar-powered technological devices to create sonic public art that gently leads our focus back to our ultimate reliance upon our star.

Visible from the street through center's big front windows is an enormous silver and neon-orange mass, suspended from the ceiling of the space. The work, "Cheesedoodle Headdress," is a recent piece created by New York-based performance artist Irvin Climaco Morazan that, when adorning the artist, resembles the head of an insect (as seen in a displayed image). Actual Cheese Doodles fill big plastic containers that stand in for eyes, and the rest of the construction is a monstrous pile of silver-painted foam and other materials.

Looping nearby is a documentation of "Performance at the Center of the World," in which Morazan, in a brightly colored outfit and a boombox-headdress, and with part of a gold-chrome wolf attached to his chest, leads a land-yacht of a low-rider by golden chain to the center of a gathering crowd in Times Square. In a feat of anthropomorphic antics, the car's hydraulics cock it into a spectating stance, and the artist strikes a similarly princely pose in front of it. The continuous roars emitting from the headdress and the chain-leash lend the illusion that the car is a beastly pet to Morazan. Suddenly a musical beat begins, and the artist oscillates between watching and directing (with a gilded bone for a baton) the movements of a small group of B-Boys while the crowd cheers them on.

"It's a pseudo-religious performance art that he does," says Cease. "It's animistic, and he's sort of acting as a shaman would."

Morazan's get-up is kitschy, and the masks and other pseudo-sacred trappings reminded me somewhat of the Hopi's Kachina ceremonies, during which everyday members of the community are transformed into gods with a little at-hand material and a whole lot of presentation. But Morazan's performance isn't a spoof on religion, says Cease. "It's not a spoof on a type of practice, it's really just an observation in a way, but using what he has available to him, which is break dancers and low-riders."

Cease is a fan of the "Hard Edged Paintings" series by Beacon, New York-based Karlos Cárcamo, six of which are included in this show. Both high and low art cultures are referenced in these works. "He sort of looks at old street writers from the 70's, recreates their tag, and then paints over them like Ellsworth Kelly, or Mondrian," says Cease. The works are a slightly jarring mash-up of sandy-textured black spray paint on gray, partially hidden by sharply defined, overlapping blocks of color. 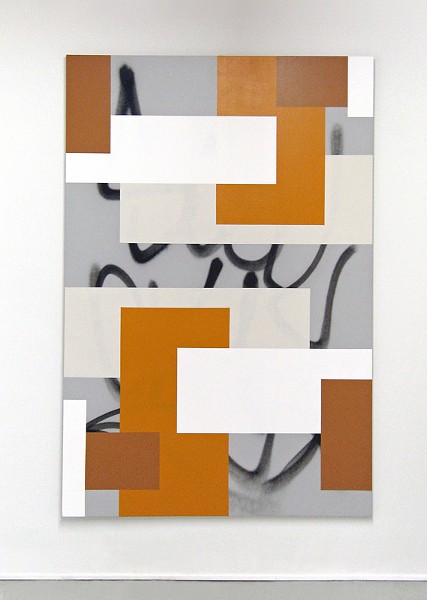 Cease says the young artist has a background in breakdancing and was involved in street art, but has developed a dedicated studio practice that pulls his former modes of expression into his current works. This is evident in his paintings as well as his collages (two are included in the show, which combine imagery of works by 20th century artists with elements of street art and culture), and his sculptures, which transform simple objects such as chunky shoe laces or microphone stands into three-dimensional gestural studies, coaxing out of their forms slick allusions to the serpentine flow of break dancers, or even the spraying of a swirling tag upon a wall.

Rochester-based painter Kurt Ketchum created a new series of works for this exhibition, each an abstract work on large, uniformly sized, boxed-out wood panels. Ketchum's work at once alludes to street art, abstract expressionism, and graphic design. Where in the past shapes and textual elements of his paintings became almost figurative and symbolic, the artist seems to be shifting more toward purely gestural and textural experiments.

Ketchum is always shifting and struggling in his practice, and unlike many artists, he is comfortable being upfront about this process, says Cease. The paintings are installed like a progression from the front of the gallery to the back: "If this is the Kurt Ketchum you know, that down there is sort of where he sees himself going," says Cease. There is a definite lightening up, loosening up, less dense, less graphic quality apparent as my eyes move down the wall. "At least at this point, that's where he sees himself going," says Cease.

The result is quietly lovely, a textured resting ground for the eyes, almost empty of representation, except where the subtle allusion to time's passage is indicated by layers upon layers of mark-making and wear that the artist has built upon the surface. 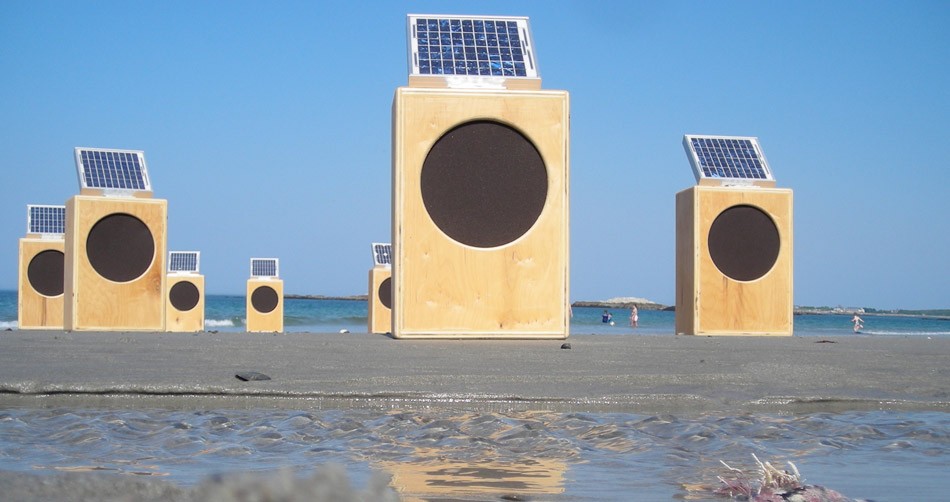 At present, Arkansas-based artist Craig Colorusso's "Sun Boxes" installation, which will be installed in the small park adjacent to Rochester Contemporary during the First Niagara Rochester Fringe Festival this fall, is represented only with a surrogate sampling of his solar-powered speaker devices, arranged on the floor at the rear of the gallery. Also present are images of outdoor installations of this sort, and a speaker emitting a sample of what the installation sounds like when activated. Nearby in the round room, visitors can watch a short documentary video in which the artist, who has a background in the experimental noise-rock realm, describes the work and his poetic ideas behind it.

The piece is "an actual manifestation of a thought process I've come up with that has to do with how I see the world, how the world could be," says Colorusso in the video, which shows people reacting to the installation on beaches and in fields, some deeply relaxing or meditating, others apparently spiritually moved by the ambient, spacey, shimmering, looped waves of a B-flat chord emanating around them. In each installation, 20 speaker boxes operate independently, powered by solar panels. To experience the work, visit the "Sun Boxes" sound field next to Rochester Contemporary September 26-28, from noon to sundown.