ART REVIEW: "Our Cryptozoological Expedition into 'The Elusive'" 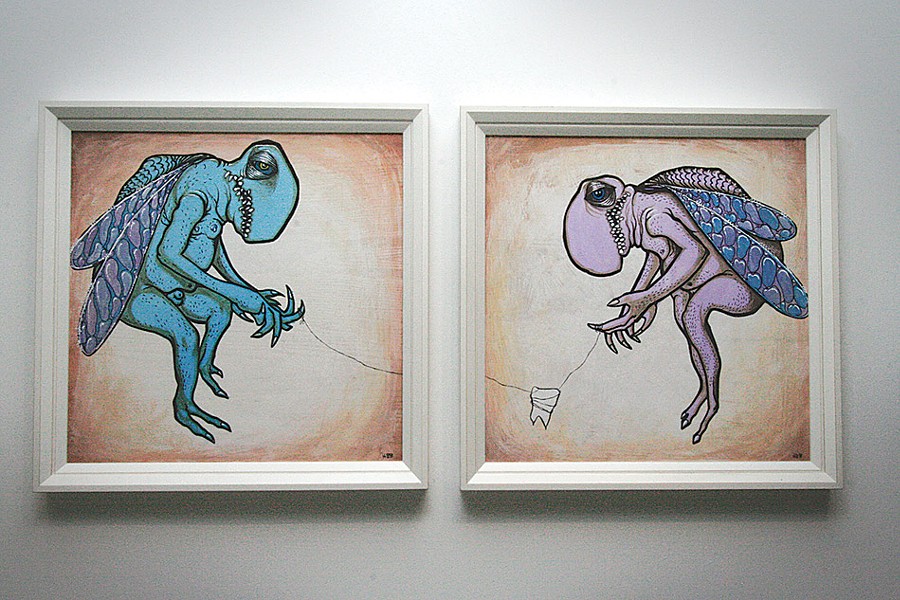 PHOTO BY ANGIE CARTER "Toof Fairies," by the Huckle Buckle Boys, is part of the current show of mythic and cryptozoological wonders at 1975 Gallery.
"Our Cryptozoological Expedition into 'The Elusive'"
By The Huckle Buckle Boys
Through May 25 | 1975 Gallery, 89 Charlotte St. | Wednesday-Friday noon-8 p.m., Saturday noon-7 p.m., Sunday noon-5 p.m.466-4278 | 1975ish.com

Though we think we're getting a firmer handle on this world, you could argue that as human beings increasingly set themselves as separate from other species, both in mind an in manner of living, our understanding of the creatures that share this planet has grown shakier and shakier. Some people study these untamed objects of fascination and create popular books and programs. But for many others, superstition results from detachment, and from chance encounters with the ever-stranger wild. A third path is taken by The Huckle Buckle Boys, who are back in Rochester with a new body of work that playfully explores various mythical beasties from around the world.

The creators who brought us "Animal Obscura" in 2012 come back to 1975 Gallery with their own brand of wilderness studies. The Huckle Buckle Boys are freshly returned from a two-month-long exploratory excursion, and I got the scoop at the exhibition opening as they spun the strangest yarns about their various encounters with distant cousins of tall tales, legends, and bits of folklore. Dozens of collaborative, colorful paintings capture centuries of chance and enchanted encounters through the artists' own interpretations of brutes and critters.

Inspired by the National Geographic Channel's "Finding Bigfoot" series, intrepid artists Garrick Dorsett and Zach Rudy knew they could accomplish much more with even fewer resources. Empowered by a small grant — well, spare change found in several unattended vehicles — and fueled by booze, a root reportedly acquired from a shaman, courage, and imagination, the rag-tag pseudo-scientific duo set into the woods of the world and the collective unconscious of culture to see what there was to see. The endeavor kicked off with a scene that is recreated in "Drinking Away Our Grant," in which we find our fearless heroes steeling themselves for what's to come at their dusky campsite, under the looming shadows of the forest, and possibly — ominously — something else.

Though many of the subjects of this show will seem familiar to you, the realities of the beasts the boys found are much stranger than what you've ever heard or imagined. Several examples of the typical Big Foot species recline in the foreground of one image, with the lesser-known (possibly because the poor dear is so shunned) "Lil' Foot" sitting in the background, his despair effectively captured by our sensitive artists. Unicorns from various times and places are recorded here, as are magnified versions of the wee "Toof Fairies," and the lesser-known "Brazilian Waxed Condor" and the pensive "N'awlins Bog Monster, a.k.a. Steven Bogman Hershowitz," who is reportedly the most shy and elusive of all the creatures found by the boys.

A large part of our fascination with the wild is the danger it still poses to us mighty humans if we wander out of our fortress gardens. It's a given that we should take care with such imposing creatures as the fierce and many-teated "Floridian Gator Man," or "Psycho William." But don't be taken in by the seemingly sweet ones, either. Explorers must take care around the adorable "Pigmy Chewps," which are a close relative to the insatiable Chupacabra sighted in Mexico and the southern United States — these renderings are based on encounters with what might or might not have been owls — and the "Black-Eyed Kids," who seem vulnerable but have leering grins and The Abyss for eyes. Note that the latter sighting wasn't really a sighting, because those who encounter the Kids don't really live to tell about it, say the Huckle Buckle Boys.

A bit of our local fauna is represented in "The Lake Ontario Yeti in the Molting Stage," which is a sad-looking fellow with a cold who was reportedly only looking for a cup of soup and a polite hello. Weather-worn Rochesterians who require the proper comforting sustenance for this harsh climate and often suffer from cabin fever must surely find themselves able to relate to such a beast. Though the boys painted the Yeti with sensitivity toward his plight, they followed the typical protocol for such an encounter and bolted.

Other times, the encounters resulted in an alliance of sorts, as evidenced by the recreation of "Suggasquatch," an extremely shy forest friend whose identity was protected with a pretty sugar-skull mask, and who out of apparent respect for the explorers twisted his fingers into the traditional HBB emblem, which the boys insist is not "flashing a gang symbol."

Traditional academics might turn up their noses at the methods of the Huckle Buckle Boys, but you couldn't find a more serious or dedicated pair of pursuers of the obscure. But don't take my word for it. Hear the boys recount their exciting tales themselves by giving a listen to the audio tour when you visit the gallery during the run of the show.