August 1969: Astronauts from the Apollo 11 lunar landing have just returned home; The Beatles have just taken their famous "Abbey Road" cover photo; and the Woodstock Festival was held in Upstate New York. Farther northwest from Bethel, a group of neighbors — also artists — decide to display some of their latest works on fences along Greenwood Street in Rochester. They call a few friends, round up some burgers, hots, and sodas, and what would become the Corn Hill Arts Festival was born. 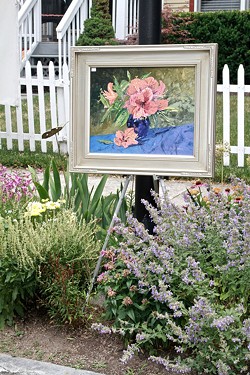 Today, we're trying to figure out how to colonize Mars; Arctic Monkeys is working on his next album; and Beyoncé has just headlined Coachella to rave reviews. And the Corn Hill Arts Festival has not only survived but thrived. "It is the heart of the Corn Hill neighborhood," says Elaine Lennox, Corn Hill Arts Festival media chair. "We've evolved as a festival, and I think what we've got going on right now is really amazing."

Reflection on the festival's history and where it is going in the coming years will be central to this year's 50th anniversary celebration on July 14 and July 15 in the Corn Hill neighborhood.

Along with the old is something new: a parade will take place on Saturday, July 14, at 11 a.m. Performers will highlight key events from 1969 as the parade snakes through the neighborhood. At the end of the route, 1960's (and 70's) tribute band InsideOut will perform. Twenty-four other acts will appear on four different stages throughout the weekend. Organizers are also bringing back a fairy house display and contest, in which artists create whimsical, tiny tree houses out of natural materials. It's a throwback to the festival's first poster, which featured a simple green fairy and the words "Greenwood Area Art Show."

The poster had been created by a neighborhood resident and artist, Frank LoCurcio. He also created the 1970 and 1971 posters, the latter of which has touched off a treasure hunt of sorts among the neighborhood association. "We desperately tried to track it down for months, but it was the only one that eluded us — at least so far," Lennox says. She says the poster features a jack-in-the-box and a festival map in the corner.

The Corn Hill Neighbors Association was recently able to track down LoCurcio in Huntington Beach, California. "Initially we were told he had passed, and we thought we had hit a wall," Lennox says. "Then we got a call from his granddaughter who said he was alive and well." LoCurcio, though, had sold the original poster years ago. The trail has gone cold. Organizers are still looking; if you have any info, send an email to chna@cornhill.org.

The remaining 48 posters were on display at Rochester Contemporary Art Center in late March, and the 50th will be unveiled on Friday, June 8, at 2 p.m., at the Hervey-Ely House on Troup Street.

Many of the artists chosen to create the posters are local — a handful have been from across country. Rochester native Cordell Cordaro designed the 2010 poster, and like many of the previous versions, his design features the neighborhood's historic homes and signature gazebo as hats, sitting atop colorful, elegant ladies and gents who look like they've been plucked from a lush, wild party. "It was a bit of a challenge for me to figure out how to incorporate the neighborhood into my style," Cordell says.

Six years later, Rachel Cordaro, Cordell's wife, took a turn. She was nervous. "It was so far out of my comfort zone," she says. Rachel largely paints florals, so architecture and dimensional work pushed her to think beyond her normal scope. "I sketched it out and sent a picture before I laid paint down to make sure we were on the same page, and they loved it. And that felt good. They gave me so much room to be creative," she says.

The yellow home she painted, adorned with her signature flowers, is on Adams Street and is now where the original painting hangs. "It seemed like the perfect place for it to live," Rachel says. 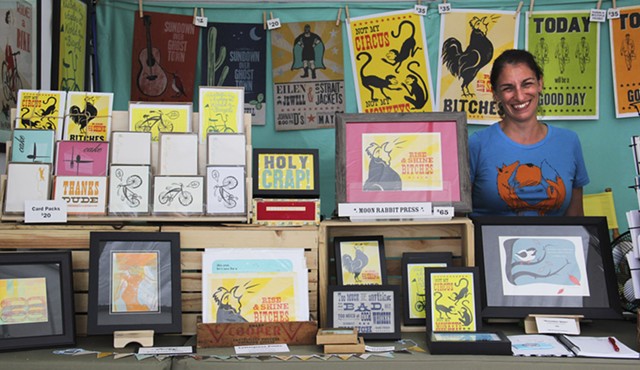 "We owe so much to our roots in this area," Lennox says. The arts festival was among the things that convinced the state's preservation board to declare the area a historic neighborhood, cementing its place in the city and its rich festival scene. "You can't say Corn Hill without thinking about the arts festival," says neighborhood resident Jim DeVinney, who is also the historian for the Corn Hill Neighbors Association. "It's become a part of the very fabric of living here."

In turn, without the festival, the neighborhood couldn't afford to pay for beautification services, the Police and Citizens Together Against Crime program, and more. The arts festival serves as the neighborhood association's single biggest annual fundraiser. Dozens of neighbors help with setup, artist registration, and cleanup, and around 365 artists and 125,000 festivalgoers descend on their streets, generating an estimated half a million dollars in economic impact, according to organizers.

And while organizers are proud of what they are able to give back to the community financially, for many, it's more about the cultural enrichment they offer.

"I love the neighborly feel," Rachel Cordaro says. "That neighborhood is vibrant and revived and you can tell that they respect their neighborhood and it's just beautiful and thriving and who wouldn't want to be a part of that."