PHOTO BY DANIEL J. KUSHNER Artists Richmond Futch Jr. and Chloe Smith in front of the completed book spine mural at Arnett Branch Library.
What started out in 2017 as a small mural depicting four book spines on the wall facing the Arnett Branch Library's entrance has expanded to include panels illustrating 36 different book titles — plus a DVD and a Motown CD for good measure.

Commissioned by the Rochester Public Library’s 19th Ward branch, the Book Spine Mural project was created and finished by project leader Richmond Futch Jr. as well as artists Chloe Smith and Ebony Singleton. The project's completion will be celebrated Wednesday, Sept. 15, at 6 p.m. at the library building on  310 Arnett Blvd. The artists will be in attendance, as will  local authors Kathleen Blasi and Leslie C. Youngblood — whose books “Hosea Plays On” and “Love Like Sky,” respectively, are featured on the front of the library building at

The third and final installment in the mural series — which was mostly funded with public donations — came about in summer 2020. The COVID-19 pandemic was peaking and the library was looking to start a project that would bring positivity. Children’s Librarian and Site Supervisor Bruce Tehan said adding more panels to the existing mural was the perfect fit.

And while the images wrap around the front of the library, with a few panels spilling over on either side of the building, it was important not to pack the book spines onto the walls with no space in between, Tehan said.

He also pointed out that libraries and bookstores don’t pack their shelves either, because the space helps to draw readers in. Futch has noticed that the mural itself is having a similar effect. Kids will look in the library for the books they see on the walls, he said.

“The biggest joy I got out of doing this project was the people in the neighborhood walking by and commenting, thanking us for doing it,” Futch said.

Futch told an anecdote about one teenage boy who stopped to thank him while he painted. “I just want to thank you for what you’re doing,” Futch recalled the teen saying. “I live in this neighborhood, and it just makes it more beautiful.”

“And when he looked at me in the eyes and said that, my heart just melted,” Futch said. 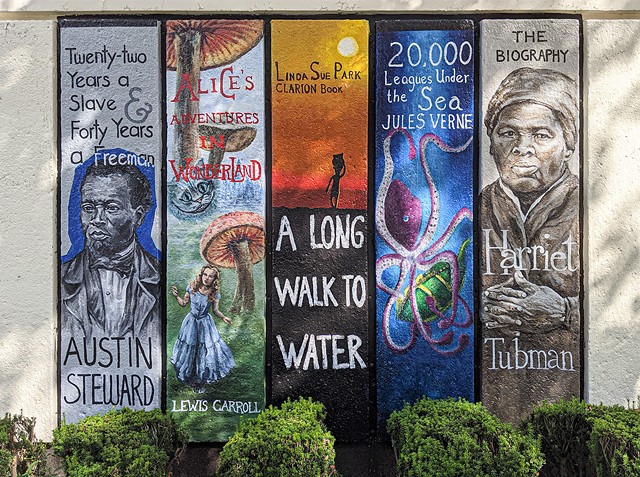 The project also inspires others to pursue art and paint their own murals, said Smith, one of the artists who worked alongside Futch.

“In Rochester there is a demand for public art, and for artists to be paid to do this work,” she said, noting that the mural project lets young people know that being an artist is a viable career option.