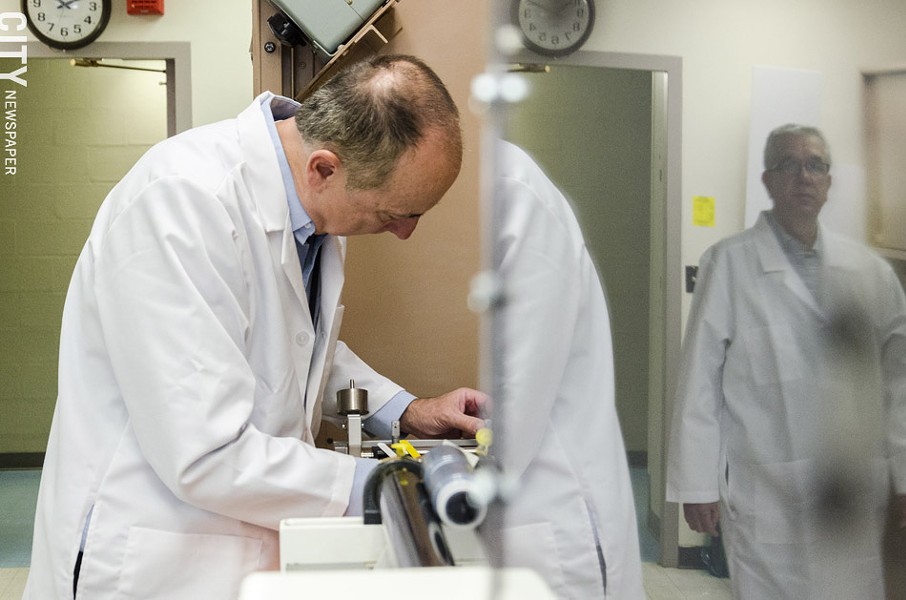 The firm's founders, Dan O'Connell and David Wetter, both worked at General Motors' Honeoye Falls fuel-cell vehicle lab before it shut down at the end of 2012. With their experience in the fuel-cell industry, each man probably could've left the region or found other high-tech research and development jobs.

Instead, O'Connell and Wetter took the same path as many former employees of Kodak, Xerox, Bausch + Lomb, and ITT: they formed a company to continue developing the technology to which they'd devoted so many years.

"There's just a great wealth of knowledge here," Wetter says. "Preserving that and growing that in the Rochester area is really the daily passion that drives us."

GM's Honeoye Falls lab was one of them, and local suppliers and university researchers worked hand-in-hand with the lab's staff. Monroe County even installed a hydrogen pump at one of the county's fueling stations, and officials helped put a prototype Chevy Equinox fuel-cell vehicle through its paces.

But GM deflated the region's hydrogen bubble when, in late 2012, it moved its fuel-cell research work to its Pontiac, Michigan, powertrain facility. At the time, a company spokesperson said that GM wanted to consolidate its fuel-cell expertise into one facility.

Delphi, which ran the region's other high-profile fuel-cell project out of its facility in Henrietta, later followed GM's lead. The company was researching solid oxide fuel cells, a technology intended to provide electricity on board commercial trucks and military equipment, as well as for stationary uses. The Michigan-based company no longer does fuel-cell development in New York, though it does some testing in the Town of Brighton, says company spokesperson Andrea Knapp.

It's worth noting that both companies left as federal funding for fuel-cell projects decreased, though the money hasn't dried up entirely.

Neither company's exit was great news for Greater Rochester, a region that prides itself on its high-tech industries. But while Rochester's fuel-cell scene may have sputtered, it is now rebuilding.

American Fuel Cell, which operates out of Eastman Business Park, is designing a specific component for proton exchange membrane fuel cells. The cells are popular with automakers, but they have many other applications, too.

In PEM fuel cells, hydrogen and oxygen react through a catalyst-coated membrane, producing electricity. American Fuel Cell is developing a catalyst formula that would allow less of the material, typically a precious metal such as platinum, to be used on the membranes.

"If you're using less precious metals, you have a cheaper product, a less costly product," Wetter says.

O'Connell and Wetter see potential for fuel-cell technology beyond powering cars. They're encouraged by the increasing use of fuel cells to power forklifts in distribution centers, they say, and as backup systems for cell towers. As fuel cells are adopted for one use, they say, they'll become cheaper to develop and deploy for other purposes.

Potentially, a modified version of American Fuel Cell's technology could be incorporated into electrolyzers, which use electricity to generate hydrogen from water, O'Connell says. He says that there's a substantial market for that technology.

One of the major obstacles to fuel-cell adoption, especially in the vehicle market, is a lack of hydrogen fueling stations. But a project at RIT's Golisano Institute for Sustainability, while focused on a cell system for residential use, could help bridge that infrastructure gap.

The research team, led by Professor Tom Trabold, is working on technology that would give PEM cells on-board fuel reforming capability. Team members are working on designs that would integrate a propane fuel reformer, which converts propane into hydrogen, into a fuel-cell stack, which is where the electricity-producing reaction between hydrogen and oxygen occurs.

The combination would be unique compared to cells on the market, says Trabold, a former GM fuel-cell researcher. The technology would be an interim step that would allow further fuel-cell development while US hydrogen infrastructure catches up, he says.

"As renewable fuels come into the market, whether it's biomethane or pure hydrogen from, say, solar electrolysis or something of that nature, then the fuel-cell technology that we're developing can easily be transitioned over to those renewable resources," Trabold says.

Researchers will retrofit the cell to a battery-powered lawnmower for demonstration purposes. But they'll also look for ways to commercialize the technology, Trabold says, and they'll explore the possibility of developing a higher-powered system, such as one that could power a house.

The projects at RIT and American Fuel Cell are just two examples of local fuel cell work; there are others. For example, Solid Cell is working on solid oxide fuel-cell technology that was first developed in Russia. The company has a development and manufacturing facility on Elmgrove Road in Gates, and its partners include Alfred University. The company is targeting stationary and portable residential, commercial, and industrial uses, according to its website.

The Rochester region has unique assets that could be attractive to fuel-cell companies.

Outside of its own research, RIT is helping fuel-cell makers refine their innovations. The Golisano Institute for Sustainability is set up with fuel-cell test beds, which have drawn the interest of both start-ups and larger firms, says Nabil Nasr, the institute's director.

Eastman Business Park could ultimately be one of the biggest draws. American Fuel Cell was attracted to the former Kodak Park because it offered ready-to-use lab space, O'Connell and Wetter say. But it also has high-speed film-coating capacity left over from Kodak's heyday as a photo film producer. O'Connell says that the same features will likely attract other fuel-cell companies to the park.

The area's talent pool is also key. The region's universities provide a source of potential workers, since a lot of the students have studied science or engineering. But there's another, obvious source: people who have worked on fuel cells in the past and still live here.

Matt Fronk, a former director of GM's Honeoye Falls lab who is now a consultant for the battery and fuel cell industry, says that many of the facility's "technologists" stuck around Rochester. They've needed some time to recover from the plant's shutdown, he says, but many are eager to get back to fuel-cell research.

"In the next couple of years, you'll see some start-up activities around this, and just because we were really lucky that those people stayed around here and that skill set is here," Fronk says.