For April Aycock, mental health is about connections

PHOTO BY JACOB WALSH April Aycock was appointed following a 90-day task force report organized by County Executive Adam Bello, initiated following the death of Daniel Prude.
April Aycock, the new director of the Monroe County Office of Mental Health, believes there is no such thing as a “normal” person.

Everyone struggles, everyone has challenges, everyone faces moments of personal crisis. For some, the experience is so chronic, getting out of bed can feel like a monumental task. All of us, she said, deserve dignity, respect, and the chance to lead a fruitful life.

“We have to talk about as a community, as a nation, what is ‘normal,’” Aycock said. “When we talk about stigma, we have to look into all of these areas where it helps for somebody to say, ‘You know what, I’m struggling with mental health,’ and create a very safe environment to disclose that.”

Aycock, whose career in mental health spans more than 15 years, joined the county in February amid a community-wide reckoning around, among other things, mental health services stemming from Daniel Prude’s fatal encounter with Rochester police.

When video footage emerged last September of Prude’s arrest, what many people saw was a system that utterly failed a person in the throes of a mental health crisis. Only hours before police confronted him running naked and acting erratic in the middle of Jefferson Avenue on a near-freezing March night, he had been released from Strong Memorial Hospital, where his brother had taken him out of fear he was suicidal.

The Office of Mental Health got swept up in the fallout from Prude’s death. An email surfaced in which Kim Butler, who was the county’s chief of clinical and forensic services, shared confidential medical information about Prude with Rochester police. She resigned from her post a few weeks after his death became public.

In releasing the report, Bello announced Aycock’s appointment and said she would be in charge of putting the task force’s recommendations into action, which could come to include adding 18 positions to FIT with the aid of a $653,000 federal Department of Justice grant.

“She brings a unique lens of equity and a deep understanding of how these key issues intersect when it comes to delivering mental health services,” Bello said.
It was an effusive nod for a person who hadn’t set out for a career in mental health.

Aycock said that as a young woman she wanted to be a physician’s assistant. A failed chemistry course at Monroe Community College put her on a different path.

“I totally bombed it, and I realized I can’t do this at all, I’m going into mental health,” Aycock laughed. “But I will tell you, the main reason I went into it is because mental health and addiction have affected my family.”

Aycock said her father died from complications of heroin and cocaine use, and that she lost extended relatives to addiction. But her family, she said, was like many others in that addiction was a subject best avoided.

Today as a leader of the county’s efforts to address mental health and substance abuse, she strives to dismantle stigma. Mental health education needs to start at a young age, she said.

“We teach people to call 911 if they need help, we teach them ABCs, we teach them all of this stuff, and we need to also start teaching about (mental health) at elementary,” Aycock said. “Teaching them about mental health and if you don’t feel right, how to reach out for help and support, and how not to be judgmental.”

Aycock looks at that education through a lens of equity and inclusion. A person seeking help should be able to find it in someone who looks like them, thinks like them, and understands their needs.

“One of the first things is representation,” Aycock said. “Having a counselor who’s Black, having a counselor who is Hispanic and understands the cultural norms, the mannerisms people present themselves with is so important, and creating that environment of safety.”

She is a realist, though. Aycock accepts that not everyone will be saved — a person can’t be given help if they don’t want it. 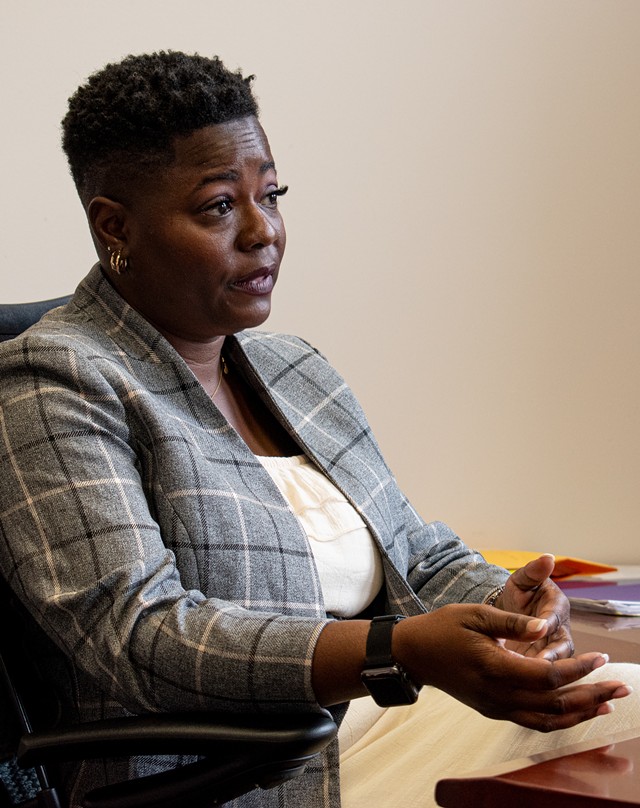 What the county can do, she said, is make sure it is reaching people where they are. That means, in part, ensuring the region’s on-the-ground crisis response teams are working together.

“We bring all of the crisis teams together at the table,” Aycock said. “We talk about various ways of how we are responding to community needs, what are some of the things we’re seeing in the community, what are some the ways we can improve our relationship among the four teams.”

Aycock is the lynchpin to all of them. Hers is a stressful position — not everyone can be saved, some problems can seem unsolvable, and there are always new issues on the horizon. It is a job that requires around-the-clock vigilance, demands sensitivity to nuance, and is prone to rancor from the peanut gallery of armchair quarterbacks when tragedy strikes.

A single parent of a daughter, Nayilah, and a son, Rodney, Aycock treasures opportunities to escape from work and enjoy time with them. She is a voracious reader and occasionally binge-watches “Criminal Minds.”

“A lot of times you can be so consumed in this,” Aycock said. “I also keep a journal, which really helps me be able to disconnect.”

The county faces major challenges around mental health and substance use.

The heroin epidemic, for example, is still in full-swing with 213 overdoses so far in 2021, 46 of which were fatal, according to the Monroe County Heroin Task Force.

Despite the challenges, Aycock tries to remain optimistic. She sees hope in each person successfully directed to treatment, each time she bumps into a person who once received help and is now doing better, and each lifeline offered to a person in need.

“It’s relationship-building, it is connecting in a safe way, it’s that no judgment zone,” Aycock said. “Because when someone is ready, they’ll remember, ‘You know what, April said I could reach out to her.’”