I went to a cidery and had a good time. This is an important revelation, because before visiting Seed + Stone Cidery, I thought that I was not a fan of hard ciders. The place is run by Bill Bly and his daughter, who just goes by "Bly." They gave me an in-depth, hands-on education about the different ciders that they make, and taught me why I previously had it in my mind that cider was not my thing. The first thing I learned was that my reasons for not liking most ciders are valid, but also that I had consumed the wrong ones. The Blys set me on the right path.

My main gripe about ciders has been how sweet even the "dry" ones are. I get it; they're made from apples and pears. A drink made from a pome fruit should be sweet. But my problem was that most big-biz ciders are exponentially sweeter than the fruit they're derived from (think of the difference between a real banana and banana-flavored food).

Part of the reason is that corn syrup is added to them, and part is because of the amount of concentrated fruit product. I gag a little bit just thinking about it. 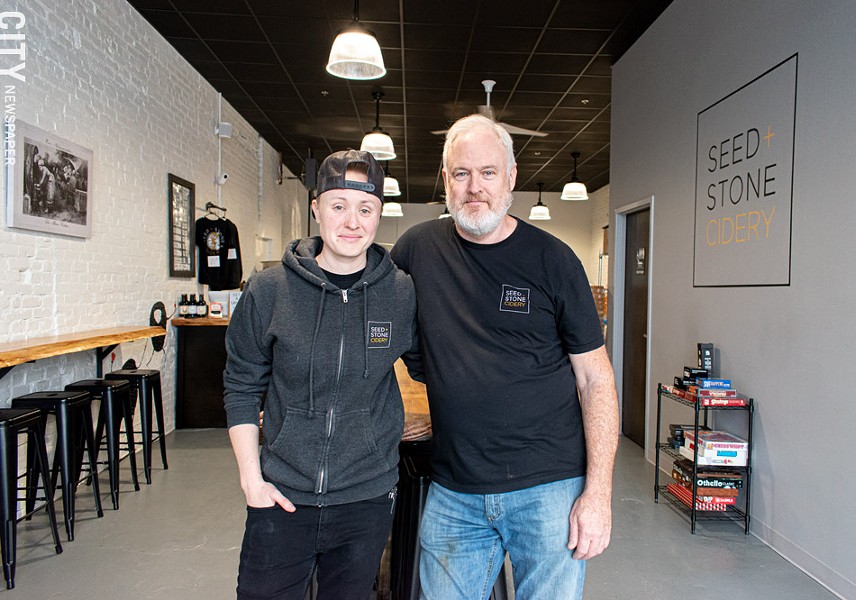 As I learned, the reason I don't like other ciders is because they truly are oversweet. They contain juice concentrates, which have much more sugar. My childhood was fueled by consuming that orange juice concentrate from a can, where you dump the contents into a pitcher with some water. It's supposed to be "orange juice", but it is really watered-down citrus sludge. (What was wrong with my juvenile taste buds, and how do I atone for what I've done to them?)

On top of that, the carbon dioxide that gives the big brand ciders their fizz is artificially pumped into them. It pretty much makes them boozy apple soda. That's likely fine for some, but my teeth and stomach would never forgive me.

Seed + Stone are having none of that. The Blys' process is closer to the old way of distilling cider. Unlike larger cideries, they make theirs at harvest time only, because apples realistically would not last through the winter. This is a system similar to how wineries run. They make no chemical adjustments to their batches or dump excess sugar in them. The cider batches go into barrels, and they let them ferment at ambient temperature, so there is no abrupt freezing or heating to speed up the fermentation process. You won't find any discarded cartridges of CO2 at Seed + Stone. Any fizz that comes in the cider came naturally or by adding a little bit of yeast in the bottling process.

The entire process, from pressing the apples to pouring the first glass, can take six to 12 months, so if you are drinking a cider in their tap room today, know that is the product of at least a year of rewarding work.

The Farmhouse is a still cider made from "spitter" apples. These are apples so tart that attempting to consume a raw one would likely result in immediately spitting it out. The Blys use a wild fermentation process for the Farmhouse, and the result is a cider that almost tastes like dry wine. Even more like a wine is the Pomme Blanc, which tastes like a white wine, almost a Riesling, but ironically, Pomme Blanc was aged in pinot noir wine barrels. The sweetness of the apples and the dryness of the wood married quite well.

Her Majesty's Choice was my favorite sample. It smells like orange blossoms, because it's distilled in barrels that Black Button used to make its Citrus Gin. This cider is dry but has a hint of sweetness without leaving that sugary, filmy aftertaste that you would get after drinking a cider from a much angrier orchard.

The Captain's Choice is a heavier cider. It's aged in bourbon barrels, which gives is a sweeter taste, but it has a slow bite that's hard to explain. It's like a light porter. If there is a cider that can correspond to the comfort of a weighted blanket, this would be it.

Not currently on draught but in bottles, there is also an "IPC", the cider equivalent to an IPA. They added hops to the barrel, and the result is a vibrant, light cider with a bite. It doesn't have a bitter aftertaste, though. Cider seems to bring out the floral notes in hops.

The Pommeau is the strongest drink that Seed + Stone has, at 20 percent ABV compared to the typical 6 to 6.8 percent. It is an infusion of apple juice and apple brandy, aged in oak brandy barrels for at least a year. It smells and tastes like a boozy apple pie. This is the perfect drink for your office Hanukkah party. The holidays are upon us, after all.

Bill Bly started making cider as a hobby, and when he retired, he decided to make a business out of it. He asked his daughter if she'd come home from Los Angeles to help him. Bly says she was initially skeptical, but was readily on board after sampling Bill's product. They opened up shop in the basement of the Hungerford Building in the fall, but recently relocated to the first level of the building, facing the parking lot. The new space looks modern and industrial, with homages to the old way of making cider. The tap room's glass wall storefront washes the interior in daylight, its left brick wall is adorned with century-old photos of stone mills and presses and barrels. Wood tables and bar are a nice accent to complement the shiny new taps and the large metal drums used for processing the cider.

Had I not known better, I would have thought I was on a tour at a distillery near the Finger Lakes. Thankfully, I'm a stone's throw away from Seed + Stone Cidery. The Hungerford is the right fit for them; the complex is known for the sculptors, painters, and photographers who work there. But at Seed + Stone Cidery, they're making art you can drink.