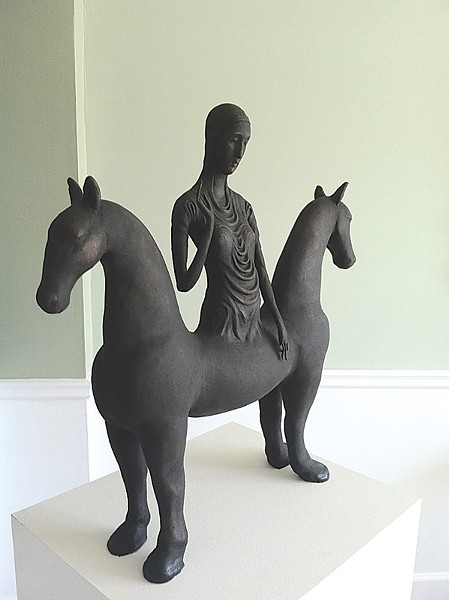 While so much of our culture is characterized by violence, our days are action-oriented, and our collective headspace is inundated with noise, the work of sculptor Robin Whiteman focuses on the sacred serenity of being a body. For years, she has sculpted human-and-other-animal hybrid figures in both ceramic and fiber media, but her current work further emphasizes duality through the merging of masculine and feminine features as well as inner and outer worlds.

"My work isn't about my intellect," she says. While academia is present in the influences she derives from multi-cultural sources, Whiteman says her work is more intuitive, about capturing essence and seeking resonance.

Some of Whiteman's most recent work features tiny totem beasts balanced on thin poles, shimmering porcelain pieces positioned at about eye-height to maximize an intimate study of their nuance. The full-bodied forms of double-headed horses and donkeys, sometimes with a serene rider, gain the illusion of weightlessness with a slight, effortless twist of the floating body, and with the searching splay of spindly legs.

Other wall-hanging, earthenware works include a variety of figurative forms of mammal hybrids, mixing the features, for instance, of humans and goats. The elegant lines of collarbones and a gentle swell of a belly flow into a hip-cocked, contrapposto pose, all human. But the face may be that of a goat, with a slight off-center set of the jaw and sturdy horns flowing heavenward, long ears limply grazing rounded shoulders.

The attention to animal detail in Whiteman's work is gained only from an intimate, focused connection with the beasts themselves.

"There's something about our animal natures," she says. "Some of the most profound moments I have are the kind of non-speaking, body-feeling, awareness moments."

Whiteman has two goats, a cat, guinea pigs, and chickens. "A few weeks ago, I laid down on the straw with my goats," she says. "It was snowing out, and Violet just put her head on my lap, and fell asleep. It was just bliss ... that non-thinking body awareness." 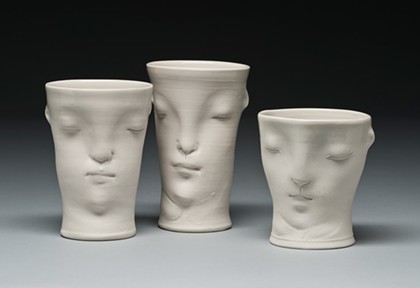 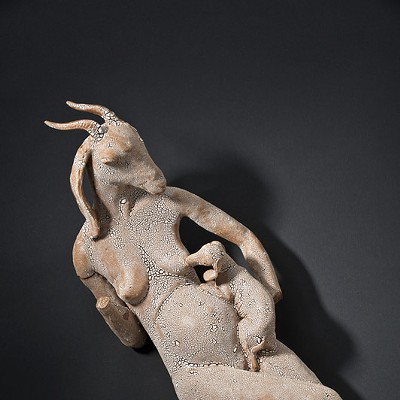 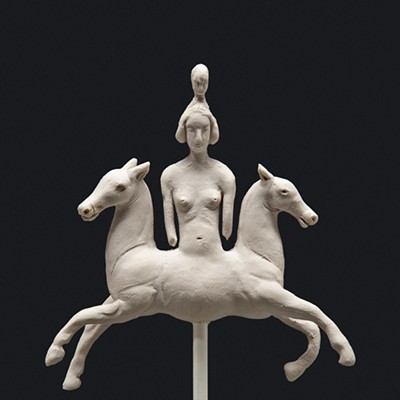 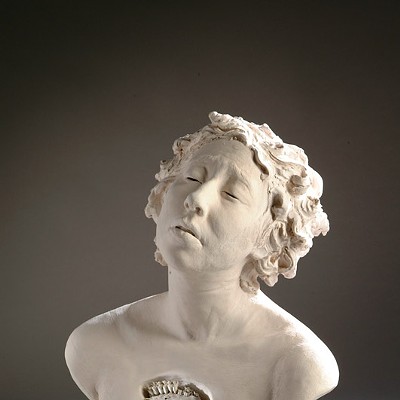 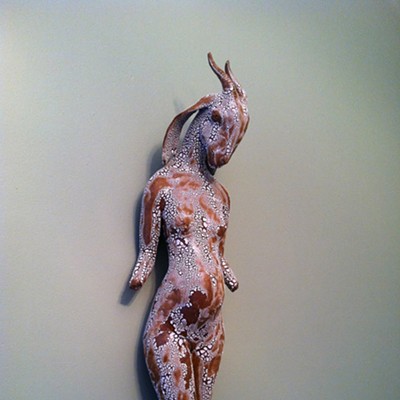 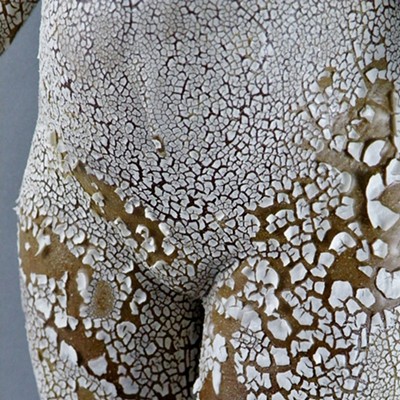 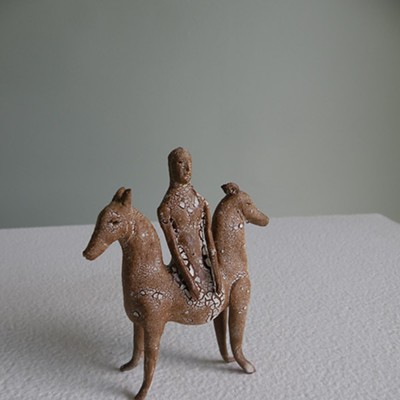 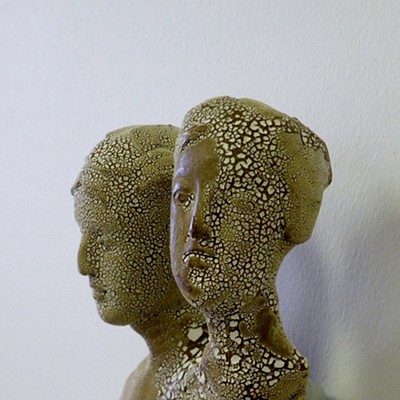 Though our current cultural focus is on the dominance of intellect and technology, Whiteman wants to celebrate the opposite — which is not to say there's anything wrong with the intellect and technology, but everything must be in balance, she says. "I like to champion the feminine, the soft, the organic, the small, the intimate. That isn't considered to be powerful, but that is where all of the power comes from."

In some of the mid-sized works, Whiteman declined to add hands and feet to the figures. "Often missing limbs and hands and feet take the focus away from the activity of the figure," she says. "In other words, where is the control? In the figure? Is the creature being ridden? Without hands and feet the figure is more passive," and the work becomes more about presence.

Whiteman's porcelain pieces on poles are meant to be shown in groups, in a darkened space, with spotlights on the pale forms. She says she aims to imbue the experience of viewing with the feeling of approaching a temple.

Whiteman was raised in a very religious family, and she says her earliest conscious inspiration came from the Catholic Church and religious art, though today she draws influences from a variety of sacred sources, including nature. "I like the idea of borrowing little pieces and merging them, because that's my idea of spirituality, anyway," she says. "It's all the same thing, just little nuances and details are different depending on the culture. Although I'm not Catholic at this point, my spirituality is a huge part of my life and my work. I don't want to just make a thing, I want it to resonate. I want it to transmit something."

This sentiment is in part inspired by the impact a quote by poet Adrienne Rich had on a teenaged Whiteman: "I am an instrument in the shape of a woman trying to translate pulsations into images for the relief of the body and the reconstruction of the mind."

There are people who are uncomfortable with some of the particulars in Whiteman's imagery, and she says, in the past, some people who viewed her work mislabeled her as a Satanist. "You take away heads or limbs, or you add animal features, or you mess with sexuality, and you're getting into people's possible zones of discomfort," she says. "I don't appeal to the masses, so to speak, but the people who do connect with my work seem to really connect with it."

Whiteman works from her home in Canadice and in a small studio space in Honeoye, transporting tiny in-process projects in air-tight containers in a tote bag. Her life is centered on family — on her 10-year-old daughter, whom she homeschools, and on her husband, who is a teacher in the city school district. She says that in the past decade, the brushstrokes of her life have gotten smaller and more refined, and her work has had to become more focused, at a scale more relevant to her full life.

But to be a ceramic artist, you need to be able to focus, Whiteman says. "You put the piece down for too long and it's dead." Though she feels the work she is creating now is more authentic and meaningful, it's important to claim a bit of tranquil time for herself. "It's best when I can have enough space alone...psychic space, physical space...to let things come to me," she says. "There's a certain grace that will happen if I trust, if I am open to it."