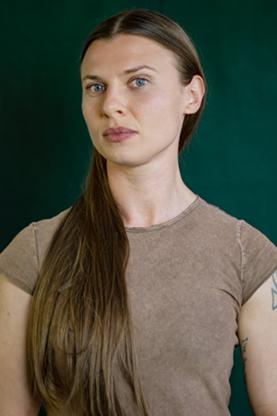 Her current art series is called “Place Projectors.'' Its first element is a projector, fashioned out of very Victorian-era-looking elements. If you found one in your grandparents’ attic, you might think they had been working on a time machine.

And the second element is a place. A place which Barron studies closely, weaving pieces of it into a visual treat. Her next “Place Projectors” project will be presented 7 p.m. Friday at The Spirit Room. As we emerge from the past year of pandemic, there will be a live audience. But the event will be also presented live on YouTube.

The spirits are not only in The Spirit Room cocktails, but also in the history a couple of blocks away — Rochester’s history of spiritualism. The infamous Fox Sisters held a séance just down the street at what was once a legendary Rochester venue, Corinthian Hall. It’s now a less-grand sight, the parking lot of the Holiday Inn Downtown.

The Fox Sisters, and their spirit rappings, were a hoax. But the illusions created by Barron’s “Place Projectors” are the product of very real technology. In the dark of The Spirit Room, Barron’s projector will bounce light off of objects, and actors will perform three “micro plays.” The plays, Barron says, are “not necessarily, specifically spiritualist. It is the idea of life after death, and how do you process that? How do you explore that?”

This is Barron’s third “Place Projectors” event. She presented one in the C15 Collaborative Art Space on Charlotte Street. A handful of her projectors are also set up in the Atrium Exhibit Space at Rochester’s Writers & Books, although the literary center is closed now for renovations.

All three of these projects are unique. The Writers & Books projectors played off of the building’s history as a police station, created by one of the best-known architects of the day, Claude Bragdon.

Barron was living in Brooklyn when she was commissioned in 2017 to create a moving storytelling sculpture with dancers. But she needed a big studio space to build this 14-foot-tall thing, The Molok. And such space doesn’t come cheap in Brooklyn.

But Rochester can accommodate artists with a budget. Barron came here to build The Molok. And she has stayed, living now in Gates.

She is a filmmaker, sculptor, painter and, with The Molok, a puppeteer. An “interdisciplinary artist,” she says, whose résumé includes working with the metal sculptor Albert Paley. She’s an adjunct professor at the Rochester Institute of Technology’s College of Art and Design. Creating her Place Projectors in the city wheret Eastman Kodak and Bausch + Lomb pioneered optical lenses.

“There’s so much potential here, and there’s already interesting things that are happening that are not happening in LA and New York City,” Barron says. “And I’m all about those things.”

The big, international cities, she says, are full of artists and museums and wonderful work. Art that is “already accepted as culturally important,” she says.

But where is the space — both physically and creatively — for artists and art that is outside of what’s playing in Los Angeles or New York City?

She saw that Rochester’s own stable of artists are already working with that in mind. “I got to see all of these disconnected corners of art in Rochester,” Barron says.

Friday’s event features projections specific to the vibe of The Spirit Room, eye candy for the spiritually curious. The bar and restaurant at 139 State St., filled with all manner of ghosts, skulls, voodoo tchotchkes, and the occasional tarot-card reader, is owned by two poets: Rachel McKibbens and Jacob Rakovan.

“When I met with them,” Barron says, “they wanted to have people kind of invoke that idea of, you know, what is it like to contact another world or something. For what the content for their venue already is.”

Shadows are inherently scary, Barron concedes. But the confluence of time and place in her “Place Projectors” is not a ghost story. Like the reactions she gets to The Molok, an unruly pile of junk, what she calls “a creature living off the memory of heirlooms.” Barron’s art strengthens the connection between the audience and the message.

Sesame Street aside, Barron asks, “Why do we look at a puppet, and emote onto it?”