It's a midsummer Thursday, the kind of evening where bursts of rain break through a sunset of pink and gold clouds. The hum of cicadas and the occasional rumble of a passing car fills the air outside the rural Ogden Presbyterian Church, where J.C. "Jace" Meyer-Crosby is leading a small group of actors in partnered warm-up exercises.

But what's happening is more involved than mere breathing or stretching. Meyer-Crosby is doing something that hasn't been done in Rochester before this year. He's an intimacy director, working to establish a safe, respectful, and creative environment for scenes that require close physical contact between performers. It's a relatively new term in the arts world, let alone locally.

"A few years ago, I was directing two different shows that had intimate aspects and one was amazing, but the other one didn't go as well," he says. "And I felt that some of the cast members may have been opened up to potential abuse. I realized we need a system and protocol for this, it can't just be luck of the draw."

Intimacy direction became a viable career with union standards in 2015, when three women founded Intimacy Directors International. According to the non-profit's website, the organization pioneers "the best practices for theatrical intimacy, simulated sex and performance nudity for theatre, TV and film," and rigorously trains and certifies new intimacy directors and coordinators (In TV and film work, it's referred to as an intimacy coordinator).

Meyer-Crosby began doing research for training and education in 2016, and came across IDI then. The non-profit was just beginning to gain steam — a New York Times article about intimacy choreography at Toronto's Stratford Festival came out in June 2017, and Rolling Stone and American Theatre Magazine both profiled IDI in October 2018. By that time, Meyer-Crosby had applied to be an apprentice with IDI (his workshop photos are featured on the website).

While the IDI work pre-dated the #MeToo movement, Meyer-Crosby credits that cultural conversation for the growing interest in his field.

"#MeToo was the tidal wave that carried what was already going on with intimacy direction," Meyer-Crosby says. "There's something about breaking the silence — not even in terms of exposing abuse, but in terms of starting a conversation that people feel awkward talking about."

As of June 2019, there were approximately 60 people in the IDI apprenticeship program, along with 15 certified intimacy directors (four of whom are founders, the rest completed the apprenticeship program). Meyer-Crosby is an apprentice in his first year, and completed his first three-day training at University of Illinois at Urbana-Champaign in August 2018. He was then invited to a teaching intensive in February of this year at the National Theatre Institute in Waterford, Connecticut, which is more about managing, diplomacy, and instructing within the theatrical setting.

Since his initial training with IDI in 2018, Meyer-Crosby has worked on 12 shows with primarily Rochester-based companies, Ithaca College being the furthest away. Ralph Meranto, artistic director of the CenterStage Theater at the Jewish Community Center, champions both intimacy direction in shows and Meyer-Crosby's work (most recently, the two worked together on "Oklahoma," with another show planned for the fall). At one point, Meranto mass-emailed people in the performance community to let them know about Meyer-Crosby's work, and that they should hire him.

"Working with J.C. has been inspirational," Meranto says. "He brings a comfort and trust to the process that actually allows the actors to push boundaries and results in a more realistic audience experience. I will never stage a show at JCC CenterStage that has "intimate" moments without this specialty, ever."


During the rehearsal in Ogden, Meyer-Crosby is dressed casually in jeans, a floral collared shirt, and white tennis shoes. He stands confidently in the middle of the tiled church hall, working with six cast members from Classics Theater of Rochester's production of "Mrs. Warren's Profession" by George Bernard Shaw, which opens August 8 at the Multi-use Community Cultural Center. The plot includes a romance between a persistent young man and a spunky young woman, and since it's a comedy, physical interaction between the two characters has the potential to create even stronger comedic moments.

Before blocking (choreography of actions on stage) begins, Meyer-Crosby has the romantic duo establish boundaries regarding where they are comfortable being touched or in contact with another body. Then, they repeat those boundaries back to their partner. For the female in the scene, the boundaries include chest and part of her torso; for the male, it's mid-trunk and upper thighs. Once these boundaries are established, both partners must block and act scenes without touching the "off-limits" parts of the other person's body.

"Consent needs to be a major focus in the room when it comes to love scenes," Meyer-Crosby says.

The exercises used in rehearsal are rooted in Meyer-Crosby's standardized IDI training, which draws on five pillars of safe intimacy: context, communication, consent, choreography, and closure. IDI states that by following these pillars, an intimacy director "takes responsibility for the emotional safety of the actors." 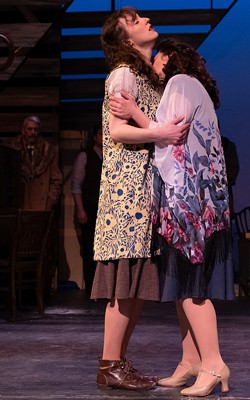 Meyer-Crosby said that most intimacy directors come to the industry one of two ways: either they or someone they know has been in a bad situation, or it's a fight director who was asked to handle violent sexual scenes, and then handed the rest of the intimacy work as well.

"They realize pretty quickly: 'Oh, I'm not qualified for this,'" Meyer-Crosby says. "And then they seek further training sometimes."

Such was the case for Syracuse native Alec Barbour, who now lives in Rochester and is currently an IDI apprentice (and yes, it's rare for a city to have one intimacy director, let alone two).

"It's weird and awesome, whenever we're hanging out with other IDI folks, they do a double take when they find out we're in the same city," Barbour says. "This sort of work — like fight directing — is much easier to do when you have someone to demo with, and someone who speaks the same physical language, too. Working with someone who has the pillars down is huge."

Barbour, who works frequently with Le Moyne College students in Syracuse, says actors (and student actors, especially) love doing this work as much as they love fight choreography.

"They've never come to me with any reaction but 'this is the best ever, more please,'" Barbour says. "A lot of acting training can be very abusive. Having something like this that allows you to ruthlessly pursue your objective but respect the specific boundaries of your partner, scene, play, is tremendously liberating for a lot of actors."

Meyer-Crosby and Barbour are planning a consent and contact improv workshop for local performers at MuCCC on August 17, and they say they want to stay collaborative instead of competitive.

"Above all, it's about reminding young actors they're not just a commodity and they have the ability to say no," Barbour says. "The more we put it out there, and the more people feel they can say no, the more will, and that's how the industry will change."

And while advocating for others feels natural at this point, Meyer-Crosby spent the last few years experiencing what it means to find his own voice.

Meyer-Crosby, who is transgender, was in an abusive marriage for years before deciding to transition.

"I got married young, before I was ready, because in conservative circles, that's what you do," he says. "That environment kept me from a lot of the identity-forming other people my age were going through. The first place I really had the opportunity to find out who I was outside of that spouse was the theater."

Meyer-Crosby had always been involved in theater growing up, but marriage and school took precedence in his early 20s.

"When I started doing community theater in Rochester after school, a lot of things I had been suppressing about myself for years became really apparent," he says. "I tried to come out as trans, but the abuse worsened as a response. Some friends in theater were radically loving and helped me get out of that environment and relationship."

In addition to his work in intimacy direction, Meyer-Crosby runs his own company, Grey Noise Theatre, and is gearing up for a Rochester Fringe Festival show, "Homo Familiarus," which runs September 13 and 16. The production is a series of 11 short scenes about different types of human closeness. Meyer-Crosby wrote several of the scenes, and others are pulled from existing works. (Barbour will also work on that show as a second set of eyes and as intimacy director.)

Meyer-Crosby will also have the chance to work as intimacy director under Geva Theatre Center's new Director of Engagement and Associate Artistic Director, Pirronne Yousefzadeh, who has worked with the founders of IDI previously. Yousefzadeh and Meyer-Crosby will work on "Queen," which runs November 7-24.

"I'm really privileged to be in a place where I can keep theater safe and nurturing, like it was for me," Meyer-Crosby says. "And I get to make beautiful work — I'm a movement artist. I get to tell stories with people's bodies and I'm privileged to do that even as my body goes through an awful lot of trauma. I'm an aide, an ally, and an advocate."