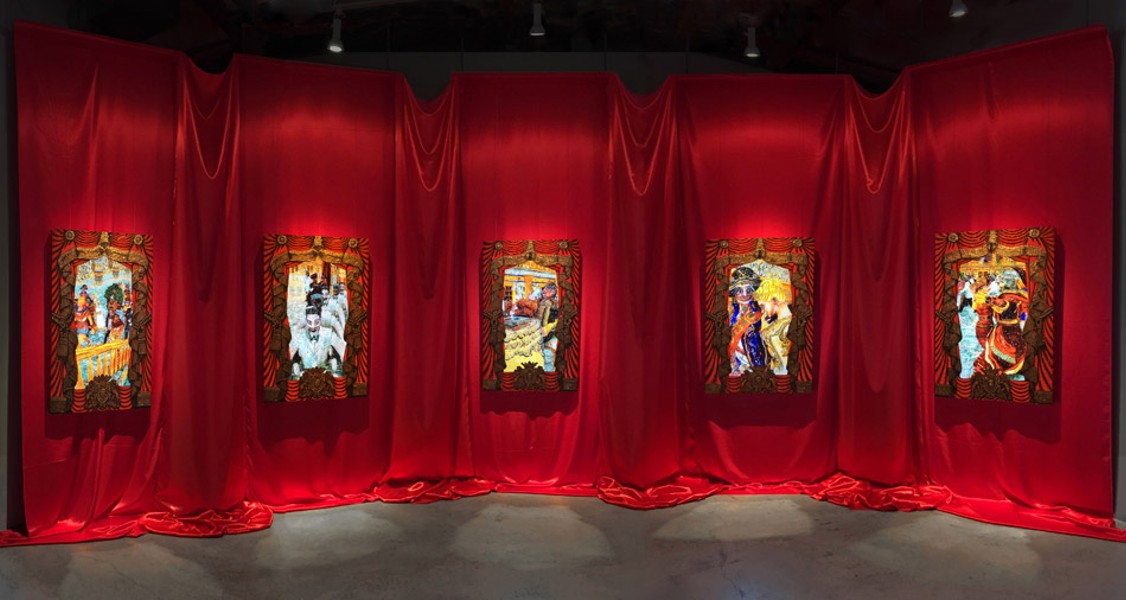 PHOTO PROVIDED Installation view of Federico Solmi’s satire-soaked video paintings. “The Good Samaritans” is on view at Rochester Contemporary through May 12.

The current exhibit at Rochester Contemporary puts viewers in the same deer-in-headlights state that the political spectacle has had us in as of late. Italian-born, New York City-based artist Federico Solmi's overwhelming video paintings depict powerful world leaders and historical figures on parade, debaucherously reveling, and accepting adulation from the worshipful masses they've conquered.

There's an all-too familiar element of celebrity in their treatment, and an equally familiar vacant adoration in the faces of the crowds. But the narratives presented in "The Good Samaritans" are filled with falsehoods and farce, a fact initially obscured by Solmi's bombastic, horrifying aesthetic.

A streaky texture of garishly saturated colors coats everything in Solmi's work, flickering and shifting slightly, creating a nervous jumping motion as the figures move through space. Although it sort of resembles stop-motion animation, it's not. RoCo Executive Director Bleu Cease explains that each element in the scenes is hand-painted, from the figures themselves to the streaming American flags, wine glasses at a lavish banquet, or the ships bearing cackling conquistadors.

"Then those paintings are scanned, in multiple versions, and wrapped around a 3D environment and animated through gaming engines," Cease says. "It's laborious."

Time and history are collapsed within the hand-painted, crest- and seal-spangled frames that enclose Solmi's video screens. Visitors first encounter a work titled "The Loving Trickster," which shows Donald Trump flanked by Benito Mussolini and Otto von Bismarck, sucking on cigars and arriving via limousine for the inaugural ball at the White House. While the fiction is obvious, the vision of soulless demagogues past and present keeping company is on point.

"It's all this incredible anachronism, just mashing together all these different figments of inaccurate and accurate history," Cease says of Solmi's work. "And it starts from this irreverent, punk rock kind of vibe he has. He's critical about the way history is taught, thought about, and whitewashed. And he's super critical of power and authority. So in a very simplified way, he's saying, 'OK, you're going to whitewash what George Washington was all about. You're not going to look at the nuance of what he was. I'll raise that lie with a tenfold lie. I'm gonna have Washington drunk-dancing, with Julius Caesar passed out on the table.'"

Solmi is an outsider artist: he never went to college yet he's significantly self-taught. He moved from Italy to the US at 25 to make it in the art world in Manhattan, and now he teaches at Yale University. His work has been widely exhibited and screened at galleries, art centers, and festivals around the world, and his star keeps rising — he's currently working on a major piece for the new Kansas City Biennial and recently gained representation at Ronald Feldman Gallery in NYC.

In the work "The American Fabius," George Washington — his face plastered with the same razor smile and unblinking, menacing eyes that many of Solmi's characters have — shoots pistols into the air while riding a horse through a crowd of thousands of cheering Native Americans. The background is filled with flags, layers and layers of them hanging in the air and floating down like ticker tape confetti, completely obscuring from view any sky or other hint of environment. And then Washington absurdly rides that horse through a portal into space.

The body of work is maximal and grotesque and off-putting, but at the same time viewers can't look away, Cease says. "There's a complex push-pull and a cinematic character to them. They pull you in, they're transfixing. And then you realize what you're looking at. There's an implication, for sure, it's not just skewering the powerful leader, it's also pulling us in and then we realize, 'Oh wait, we're really just sitting back watching this happen.'"

The viewers are placed inside the chaos, given the perspective familiar from first-person shooter video games, and in a way are complicit in the scene; we're passive actors in the satirical dystopia.

Solmi's soundtracks are a combination of bombastic, parade pomp and cheering crowds, and the tone and pacing of the music also indicates that something is off. "It puts you on edge," Cease says. "But you keep watching and you go back for more — it's gluttony on our part also."