Amanda reviews 'Holding On through Song'

“Holding On through Song: A Celebration of the African-American Spiritual” was not typical Fringe Festival fare. There was no spectacle or debauchery. No one set out to create a crazy audience-driven event in a strange and curious space, or see how many flaming swords they could juggle while drunkenly reciting Shakespeare and riding a unicycle.

Instead, “Holding On through Song,” performed by Rochester choral group First Inversion, was a gut-wrenching, educational, and emotional performance of spirituals that truly rang out to heavens and called down the Ancestors, who were guided into the gilded Lyric Theatre by the call and direction of Lee Wright.

Wright took the audience to church. But he also packaged a lesson of the brutality of slavery and the continued suppression of people of color, and handed it to the audience with sincerity and confidence.

The performance was shaped by a series of community conversations. Local activist Christopher Coles led a vibrant discussion online, questioning if a mostly white chorus should sing these songs. This led to people calling for the cancelation of the performance. But after taking the time to meet with each other and with other community groups, including Standing Up for Racial Justice (SURJ), additional auditions were held and the show went on. 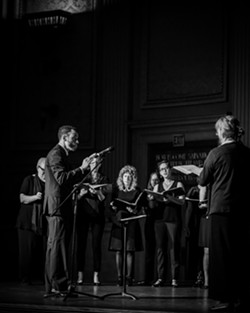 A member of SURJ spoke to Wright outside the theater, and said to him, “I appreciate your openness, I appreciate your listening, and all that came out of the dialogue. Thank you.”
Wright interspersed the spirituals with readings based on the input he received from the community. The choir had not heard these readings before the performance. The emotional impact fed and influenced the meaning and emotion of each song. Wright said of the singers, “I think I felt that they were affected by what they heard, and it was a very special experience.”

It was felt by the audience, as tell-tale sniffles could be heard (and even your stoic writer may have shed a tear or two) after some performances, but particularly after Marcus Jefferson’s powerful solo performance of “Were You There.”

“Holding On through Song” will be performed again on Saturday, September 15, at Lyric Theatre: Main Stage. 8 p.m. Free. Appropriate ages 13 and older.