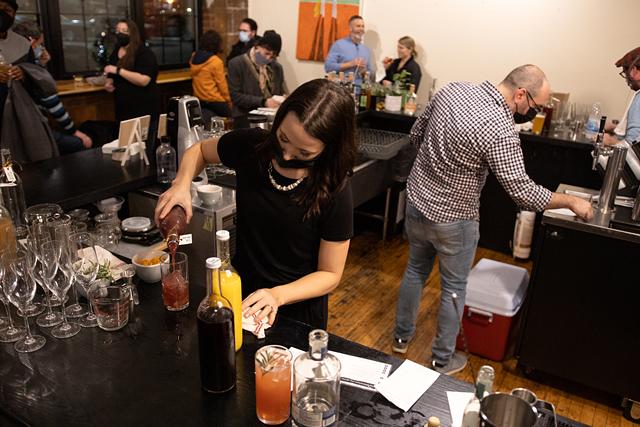 On a chilly night in early December, Fuego Coffee Roasters was hopping long after closing time — but the stimulation in the room wasn’t courtesy of caffeine. Around 70 people ranging in age from their early 20s to late 60s had gathered for drinks by AltBar, a new pop-up enterprise.

A woman at the counter waited for her second drink of the night, a sparkling herbal cranberry mix called “Kiss Me at Midnight.” “What the heck, I’m not driving,” she said with a chuckle and a wink.

Everyone within earshot got the joke. They could all indulge as much as they wanted and get behind the wheel because everything on the menu — from the cocktails to the beer — was non-alcoholic.

AltBar was launched a month earlier by Meg and Bob Hartman, a married couple who spent much of the three hours they had booked at Fuego working the room and taking orders from a sold-out crowd. Their venture taps into a non-alcoholic revolution that is gaining momentum around the globe, as alcohol-free spirits hit the market in record numbers.

Bacardi, the rum manufacturer whose brands include Grey Goose vodka, Dewar’s Scotch, and Bombay Sapphire gin, identified its non-alcoholic drinks division as among the most dynamic in its latest annual Cocktail Trends Report.

“Globally, 0-percent ABV spirits have received more interest than any other spirits category — for the second year running,” the report read. “Despite headlines surrounding increased alcohol consumption . . . bartenders feel that the pandemic has accelerated the 0-percent trend, with consumers more open to trying non-alcoholic options as their usual routines are upended, more experimental ways of living emerge and new goals are set.”

The Hartmans are seizing the moment. They have three more pop-up events in Rochester scheduled for “Dry January,” the social media-fueled month of voluntary sobriety.

First up is an AltBar's partnership with Scents by Design for non-alcoholic beverages and hands-on candlemaking on Thursday, Jan. 6. That is set to be followed by two more dates at Fuego on Jan. 7, a complement to the monthly citywide gallery night of First Friday, and on Saturday, Jan. 29. Details can be found at altbarroc.com.

Bars are starting to take note of changing drinking preferences, with many adopting hybrid menus that offer drinks in both alcoholic and non-alcoholic versions. Several Rochester bars serve alcohol-free cocktails and beers, including The Spirit Room, Cure, Velvet Belly, and Comedy @ The Carlson.

The shift speaks to a growing interest among consumers in abstaining from alcohol but wanting a social night out and the sophistication of a well-made drink.

But AltBar emerged from something more personal.

Bob, a 36-year-old senior partner in product design and strategy at MVP Health Care, said he quit drinking two years ago upon realizing he had a problem.

“I just found that I couldn’t moderate my drinking, and it was causing issues for me,” he said. “I was numbing my feelings and my experiences. I was self-medicating.”

Drinking is as ingrained in American culture as baseball and apple pie. But the consequences are sobering.

The 2020 National Survey on Drug Use and Health found that 28.3 million Americans ages 12 and up had alcohol use disorder, which is defined as “a chronic brain disorder marked by compulsive drinking, loss of control over alcohol use, and negative emotions when not drinking.”

The same year, the Centers for Disease Control and Prevention reported that an average of 95,000 people die annually from alcohol-related causes, making booze the third-leading cause of preventable deaths in the United States. Almost half of the deaths are due to binge drinking, the CDC found.

Bob was ready to throw off the yoke of alcohol, but said that he and Meg found that restricted many of the activities they previously enjoyed together on date nights away from their 3- and 5-year old children. Meg, also 36, is a marketing professor at Roberts Wesleyan College and is not on the wagon.

“Our options were pretty limited, we could basically go out to dinner and that was about it,” Bob said, adding that the few late-night, alcohol-free spots in town were coffee houses.

At the Fuego pop-up, Dean Wilson and his wife, Claire Pike, were among a group of four sampling the menu of six seasonal cocktails. Wilson said he wasn’t drinking much at home during the first stretch of the pandemic, and that when bars and restaurants reopened, he found his tolerance for alcohol had “cratered” and that he no longer enjoyed being drunk.

“This is a nice alternative,” Wilson, 34, said of the event. “It just seemed like it would be a fun thing to do, to see if you could actually get the taste of a cocktail without having to worry about feeling hungover until 4 p.m. the next day.”

Their friend Richie Ballard, 33, said he stopped drinking earlier in the year for medical reasons.

“The one thing that I miss about drinking is the social element of it,” he said. “So I'm happy that this kind of thing exists for people like me.”

Ballard’s partner, Angela Santee, 30, said she was drinking less to support him. She favored the Ginger Snap, a fizzy, warming beverage that uses Ritual’s rum alternative, lime juice, vanilla syrup, and ginger beer, something like a Light & Stormy.

Each of the seasonal menu items were tested on the Hartmans’ friends. Notably, the Cold Fashioned, which is made with Monday’s zero alcohol whiskey, Fuego’s cold brew coffee, bitters, and simple syrup, is a slightly smoky-sweet stand-in for an Old Fashioned.

But some drinks are like nothing most people have ever tasted.

The unique Walk in the Woods blends Wilderton’s non-alcoholic spirit, Earthen, with elderflower water tonic. It is piney and crisp, like strolling amid evergreens and trying to catch snowflakes on your tongue.

The presence of an alcohol-alternative bar is, in some ways, an unexpected sign of a city expanding its cultural sophistication. In addition to buying alcohol alternatives and experimenting with booze-free cocktails, the Hartmans conferred with proprietors of sober bars in other cities, including Awake in Denver, Sans Bar in Austin, Coast Dry Bar in Chicago, and The Open Road in Pittsburgh.

AltBar received an enthusiastic reception at Fuego from people abstaining for various reasons. At the pop-up, a pregnant woman sipped from a stemmed glass.

Married couple Brent and Nikki Hungate chatted about the struggle to normalize sobriety over a charcuterie platter. Nikki said she has been in recovery for 26 years, after getting sober at 16. Brent wore a leather biker jacket with a patch that read “Clean and Sober,” and said he’d been in recovery for 20 years.

“I think that if something like this were to take off in Rochester, it would be a big hit in the recovery community,” Brent said. “Not that we don’t like coffee shops, but it’s just something different from coffee.”

Nikki added that on the walk from the parking garage to Fuego, something occurred to her: “‘Oh my God,’ I said, ‘We’ve never been on a date to a bar!’”

The Hartmans said their goal is to create a space where people feel comfortable and like they aren’t missing out.

But Meg also envisioned AltBar being a stop for bar-hoppers, as a way of keeping the party going while spacing out alcohol intake. Bob said he has missed the camaraderie of sports bars, but not being surrounded by people getting tanked.

“My dream would be that this becomes a physical location and that there is Sunday football, with non-alcoholic beers on tap,” Bob said. “You know, having the DIRECTV NFL ticket, and having it be just a place that football fans can come gather, not worry about drinking too much, and watch the games. That's a piece of the dream.”