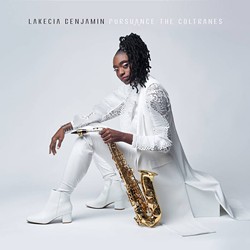 While studying at The New School in New York, saxophonist Lakecia Benjamin was already turning heads, playing with jazz icons Clark Terry, Reggie Workman, and Rashied Ali. In recent years, she’s been a go-to player for pop artists like Stevie Wonder, Alicia Keys, and Macy Gray. On Benjamin’s new album, “Pursuance: The Coltranes,” she stakes out bold new territory with repertoire combining the music of John Coltrane and that of his wife, Alice Coltrane.

Countless albums have paid tribute to John Coltrane, the universally revered saxophonist and composer. Few have acknowledged the contributions of Alice Coltrane, who played keyboards and harp, and after her husband’s death, founded an ashram and turned increasingly to spiritual music. No records that I know of have explored the music of both Coltranes. The album is co-produced by Workman, a bassist who played with both John and Alice Coltrane.


Workman is one of the many jazz greats, spanning three generations, enlisted for this wonderful project. He joins saxophonist Greg Osby on Benjamin’s treatment of Alice Coltrane’s up-tempo “Affinity.” John Coltrane’s “Syeeda’s Song Flute” (with Ron Carter on bass) and Alice Coltrane’s “Turiya and Ramakrishna” stand out as showcases for Benjamin’s saxophone prowess and innovative approach to arranging.