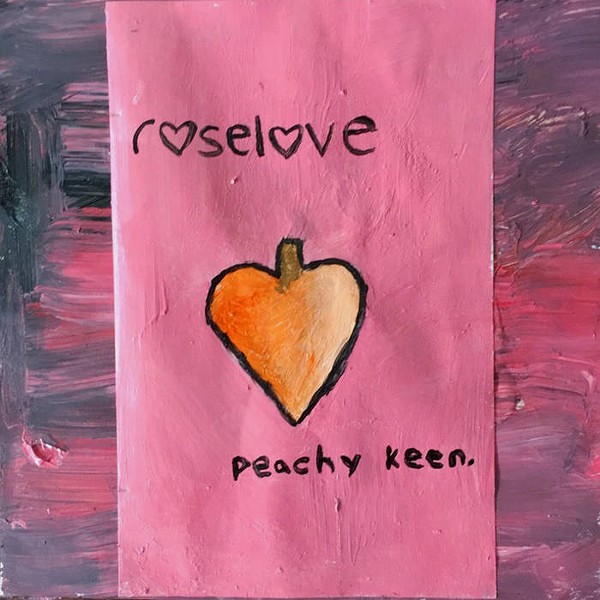 If art were supposed to be perfect and polished, the young and inspired would hit snooze instead of making it, and beautiful albums like Roselove's "Peachy Keen" would never exist. Rose Love, a rising voice in Rochester music, will release the collection on October 13, and it's an unbending work of nonconformist art.

The qualities of old folk songs from the early days of recording -- the low-fi quality, the unaffected form, the almost guileless innocence -- are often things that are missing from modern music. But like early recordings, "Peachy Keen" is raw and unassuming. In the opening tune, "Geography," Love contemplates limitless mobility, while mixed meters and spliced guitar evoke feelings of jumping around from place to place. In "Txt Me Bby" and "You Don't Want Me," buzzing distortion and dissonance create an atmosphere of disarray, as the artist genuinely addresses the insecurities that come with being human.

Most of the songs are sparsely arranged for voice and guitar, with the occasional Casio keyboard played by Love and the album's sound engineer, Steve Coleman. There is a lightness to title track "Peachy Keen" and "Peachy Keen (Reprise)," in contrast to some of the dark subject matter in surrounding songs. In between giggling, Love makes out the words "peachy peachy keen" as the Casio keyboard, which sounds more like a Mellotron, jaunts to a 90's drum machine beat. Despite overtones of cynicism, there is a sense of hopefulness that could be viewed as the overarching essence of the album.

Love makes herself vulnerable in both the unembellished, unedited way she chose to record "Peachy Keen" and in the honesty of her words. The clear theme throughout the ten-song album is recovery from trauma, and how that trauma manifests itself later in life. Songs like "Dear Mom," "Feel Dead" and "Epitaph" are powerful and pointed in their message, incisively pronouncing what some might consider too taboo to say. Roselove reminds us that mental illness needs to be talked about, and that recovery can be a slow and complicated process. The songs take on different aspects of dealing with trauma, the relationships affected by it, and the highs and lows that life throws at you.