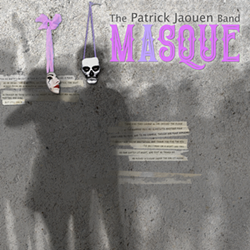 Whether it’s Iceberg Slim’s laconic rap from the ghetto or the way cowboy poet Tom Russell embraces the legacy of his characters, or Tom Waits’ Beat jazz stories, I’ve always been particularly drawn to the language and the story in a song. And though this is just a shortlist, there’s a new artist to add to the echelon: Patrick Jaouen.

The Patrick Jaouen Band has just released an extraordinary album, “Masque,” a work that splits its time lyrically between spoken word cool and an emotional thrill through singer-songwriter eyes. It’s a concept album of sorts that plays out like a dark ballet. Story-wise it’s a little haunting. It doesn’t end well for the protagonist, so it’s not to be confused with being a fairy tale or bedtime story, even though it still plays out that way slightly.

The music is lush and lasting. It endures, as does Jaouen’s voice as it soars skyward. You can thank Brian Moore at Red Booth Studios for that.

The jump from song to spoken track is flawless, drawing you into the story. And you’ll hear something new each time. Exquisite.