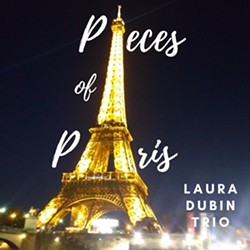 If there was ever a need for some musical escapism, now feels like the time. Thankfully, Rochester jazz pianist Laura Dubin and her husband, drummer Antonio Guerrero, have come through with “Pieces of Paris.” The nine-track album, released on June 20, chronicles the couple’s 2019 summer vacation in the City of Light, with Dubin’s instrumental compositions communicating their impressions of some of Paris’s most memorable locations.

The result is a nostalgic travelogue replete with music that exudes quaint charm. “Pieces of Paris” is what you would get when an audio recording functions as a carefully crafted home movie. In fact, the digital album comes with both audio and music video versions. Visual aids notwithstanding, in your mind’s eye you can practically see the reel-to-reel projector, rolling black-and-white film of pre-war Paris when listening to this album.

Though billed as a Laura Dubin Trio performance, “Pieces of Paris” actually has Dubin pulling double-duty as pianist and providing the upright bass lines via keyboard. Her well-established ability to create sparkling melodies is on display, as is her lively, if conventional harmonizations using standard jazz and blues building blocks.The grace and fluidity of her phrases at times recall the work of Vince Guaraldi.

The opening track “Portrait of Paris” sets the scene nicely, as Dubin’s waltzing rhythm patterns jibe well with Guerrero’s swing syncopations on the drums. Things take on a distinctive, contemporary crossover feel with the smooth jazz ballad “Monet’s Garden,” before “Le Canapé” showcases Dubin’s dexterity with slippery melodic ornamentations as the couple aims to capture the invigorating excitement they must have experienced playing the aforementioned club just outside of Paris.

The latter track, along with the similarly bubbly “Le Caveau de la Huchette,” depicts Dubin and Guerrero at their best, as the pianist taps into effervescent melodies that seem to float above the understated but active articulations in her husband’s mid-tempo rhythms. “Le Caveau” relies particularly on bluesy chordal language and a jaunty melodic sensibility, showing flashes of jazz titan Oscar Peterson’s spark at the keyboard.

The album closes with the scintillating “Montmarte,” a concise, whip-smart composition featuring uplifting chord progressions and the tastiest walking bass line on the album. Recorded, mixed, and mastered by Guerrero, “Pieces of Paris” possesses all the composure and chemistry we’ve come to expect from the Laura Dubin Trio. While part of me would have loved to hear these nine tracks recorded live, there’s no denying the warmth and sincerity in the music.