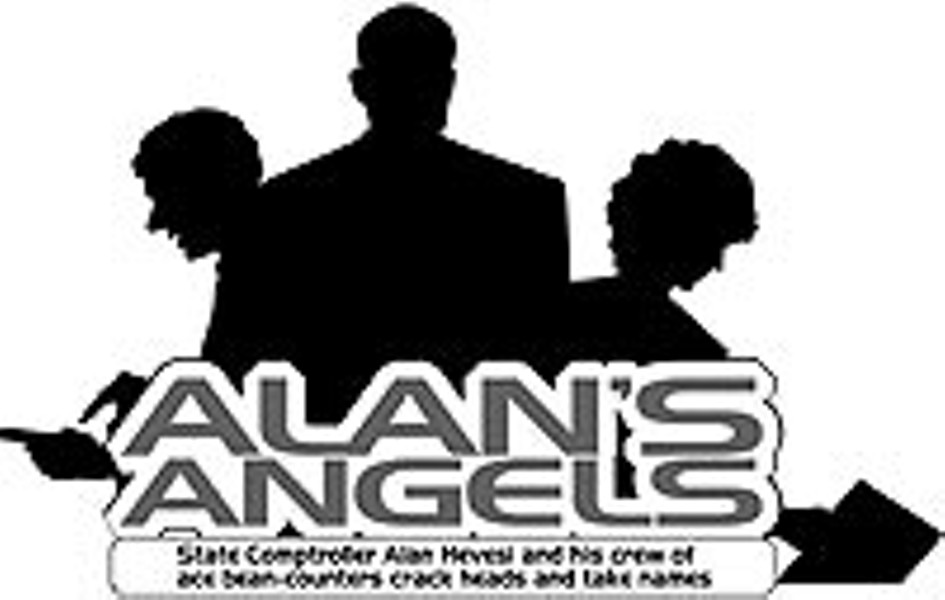 Part two of a two-part series. Read Part one here.

In last week's issue, we undoubtedly introduced many of you to New York State Comptroller Alan Hevesi, a little-known public figure around here who nevertheless wields an enormous amount of power and influence.

Hevesi and his staff of 2,300 are the state's auditors, accountants, and bookkeepers, charged with reviewing the budgets and programs of New York's roughly 1,600 local governments (as well as state agencies). The Comptroller's Office also examines the finances of the state government itself, though, as Hevesi says, "there's no law that requires us to do that, interestingly."

There may be a reason the governor and legislative leaders are hesitant to have the comptroller's office check their budget homework. A report on New York State's finances released by Hevesi's office last month found that though this year's budget is balanced, there are "huge gaps" estimated for future years: $5.3 billion in 2004-05 and $6.9 billion in 2005-06. And in a March report, Hevesi put numbers to the oft-repeated claims by Pataki and others that the 9/11 attacks were a major cause of the state's fiscal crisis.

"The majority of New York State's revenue declines over the last two years are more directly connected to the economic recession and the downturn in the financial markets fueled by corporate scandals," the March 7 report says. It also notes "spikes in energy prices and the threat of war" as contributing factors at the time. The 9/11 attacks accounted for about a third (about $2.9 billion worth) of the state's revenue declines, Hevesi concluded.

Sometimes, while poring over a municipality's records, Hevesi's crew will catch a criminal pocketing public money, such as Ruth Milks, the former village court clerk in Perry, who added a bogus $35 surcharge to hundreds of parking tickets. Other times, Hevesi's team is called in to rescue a municipality from financial ruin, as it is currently doing for the City of Buffalo.

They also do plumbing. The City of Syracuse called the comptroller's crew in when it became apparent that something was leaking like crazy. The city's Water Department used about 14.5 billion gallons of water in 2001, of which over a third, 5.6 billion gallons, was unaccounted for. Hevesi's office found that upgrading water meters and record-keeping methods, among other measures, could help the department keep track of waterusage and produce millions in heretofore unrealized water-usage fees.

However, it's Hevesi's role as the sole trustee of the state's now $105 billion government employee pension fund that makes him a real player. Having ultimate control over a pot of money that large gets people's attention in and of itself. But Hevesi also uses that leverage to pressure corporations the pension fund invests in to clean up their act and do the right thing --- for financial and moral reasons.

We begin part two of our interview with Hevesi by discussing something the comptroller, a career public official, should know about...

City: Some cynical political observers note that public officials crave the opportunity to serve long enough to benefit from the state's pension system. Is it a lucrative enticement?

Hevesi: There was a time when the pension fund provided for public officials very lucrative pensions. Those days are gone. If you enter the system now, even as a member of the Legislature, you're at Tier 4 [the lowest tier]. That's not lucrative.

In the '70s, the pensions were so dramatic... [they] allowed elected officials to retire, like cops, at 20 years at pay. That's how delicious they were. That's closed. There are very few people left who [qualify for that].

These pensions are not inductive. Nobody's running for office for the pension. They're not even running for the salaries. Most people who are elected officials could be making more money in the private sector. They're doing it because of, you know, the lifestyle, the excitement, the ego fulfillment, not to mention the fame. But it's not the pensions anymore.

City:Our county executive has decided to use tobacco settlement money to cover operating deficits. What's your take on the wisdom of that?

Hevesi: I'm sort of sympathetic. The notion of the tobacco revenues was, of course, to offset the health care costs from tobacco. The governor himself has taken 12 years of tobacco money in a borrowing to close his deficit.

So when you're Jack Doyle, and you're faced with using this money to close the deficit for operating expenses, or raising the property tax or business taxes that will drive some businesses out of the county, I'm sure he hates to do it, but he's trying to select the least painful of the painful options. They're all painful options.

He has a pot of money. It's temporary. Use it. I'm not sure if you were the county executive, you wouldn't be making the same calculations, even though in a vacuum, it's not a good idea.

City:It's been observed that the counties' fiscal turnaround would not necessarily result from a national upswing in the economy, since counties don't collect income tax. Do you agree?

Hevesi: Here's why I'm less optimistic than I might be. Whether the income tax cuts from the federal government directly affect the county revenues or not, even when we had the greatest boom in American history, upstate didn't enjoy the boom. It was a downstate phenomenon, south of Rockland. Rochester, Monroe County, probably did better than the rest of upstate, but it was flat or it was minimal growth. Buffalo went sour; a lot of the small cities, Binghamton, went sour. So that's one.

Two, here's my take on that huge tax cut: The federal government's plan for the economy is a tax cut, that's all it is. And it's huge. They say it's $350 million, but that's phony. It's $800 million over 10 years, because in order to call it $350 million over 10 years, they put in sunsets --- in other words, the bill phases out at 2005, 2006, but there isn't a soul in the Congress who doesn't believe, with a wink, that they're gonna repeal the sunsets. This is only propaganda.

So what happens when we have these massive tax cuts, on the upside, in the short term --- a year, a year and a half, maybe through a presidential election --- there'll be an up-tick in the economy. It will affect everybody. It's starting to happen already. It's psychology. The markets are up.

But here's the problem: Reducing the taxes and the revenues of the federal government without reducing spending means you have to borrow to make up the difference. During the Clinton boom, the economy boomed, we created 22,000,000 new jobs, and the deficits we always had were turned into trillion-dollar surpluses --- again, everything over a 10-year period. They have reverted back to multi-trillion-dollar deficits, debt.

And if you do that for 10 years, you're borrowing huge amounts of money. It drives up interest rates. There's less money for private investment --- for research and development, for expansion, for inventory --- and you go into recession. High interest rates means your credit card now. You buy a car, it's much harder.

What happened was, when this borrowing occurred in the 1980s, for a couple of years there was a huge amount of cash flow, a lot of money. You could say 'yes' as a government, because they had all this borrowed cash. It re-elected President Reagan --- although other things did, I don't want to oversimplify it.

In 1987, we had to pay the money back, and we went into a terrible recession that lasted for six years. New York State lost 600,000 jobs. Some would argue New York State's own economy is dysfunctional, so maybe if it wasn't dysfunctional, we would have lost 500,000 jobs, but it was awful. This debt is awful, and the tax cuts are producing huge amounts of debt.

The other piece of why I'm pessimistic is: Who's getting the tax cut? Middle-income families are getting a couple hundred dollars, $300, that's great. Millionaires are making $93,000 on average. I haven't figured out what the multi-millionaires will buy new to stimulate the economy that they haven't bought already.

So I think we'll have an artificial increase in growth right through November of 2004, then they'll goose it up and we'll go into deep recession. I'm very nervous about that. If I was a local government official, and if I was the governor, I would plan for that.

City: You've been an advocate for shareholder activism, particularly regarding environmental issues. How effective is this type of activism?

Hevesi: We are very activist, and the majority of pension funds are not. We're in the outer-fringe of activism.

We believe we have to be activist, and particularly in the context of the corporate scandals that have gone on, to change corporate governance --- independent boards of directors and those kinds of reform.

We also believe that our companies have to behave, and even invest in the short term --- as you said, in environmental matters, as an example. Because that small investment up front saves us huge problems --- lawsuits, loss of revenue --- in the long term, and we're long-term investors.

So when Exxon Valdez polluted Alaska, we joined on in the creation of the CERES environmental principles, which we ask our companies to abide by.

When companies discriminate, we fight them. The Cracker Barrel company, of "Middle America," decided to reflect what they thought were middle-class values by firing all their gay and lesbian workers, for no reason other than they were gay and lesbian --- or perceived to be. We fought them for five years, before the boycotts and the lawsuits and so on, to clean up their act.

Same with Texaco. Texaco was sued by African-American workers for a pattern of bigotry --- provable [bigotry], policies that discriminate against black workers. Ultimately, it settled for $180 million, a class-action suit, and we pressured the company to settle that suit.

Then there's another level. I am the lead plaintiff in the WorldCom case, in the securities litigation --- New York Common Retirement Fund, Hevesi v WorldCom --- because they admitted to $10 billion in false filings, in fraud. So we have to clean up Corporate America, or that portion of it which needs to be cleaned up.

We do it all. We do proxy fights. We do shareholder fights regularly. I have a separate team of professional staff who does this. Also, under the new federal law of 1995, it's the big pension funds that take the lead in the shareholder lawsuits. So they're not frivolous. We were co-lead plaintiff, when I was City Comptroller of New York, with Carl McCall, the state comptroller, and with California, in the Cendant case, where we won a settlement of $3.2 billion, which is four-and-half-times larger than the prior largest settlement.

So we do lawsuits, we do proxy fights, we do jawboning, we do pleading, we meet with companies and say, 'Change this, do this. We own the company. We're the shareholders.' And sometimes we fail and sometimes we succeed.

City: Are CEOs becoming more responsive to your actions?

It's us. Frankly, during the boom years, when this corruption was taking place at some of the large companies, we shareholders, generically, were complicit. We were making a lot of money and nobody cared. The bad behavior crashed down on us.

But certainly, there are new rules: There's this Sarbanes-Oxley federal law; the SEC has new regulations; the attorney general, Eliot Spitzer, has done a sensational job in raising consciousness. So the combination of things have made the CEOs much more responsive.

But it's our job to sustain this.