There are some changes ahead for AIM Photonics, the Rochester based organization that was set up to accelerate growth in the photonics industry.

There is a new Chair of the AIM Photonics Leadership Council. Bob Duffy, the President of the Greater Rochester Chamber of Commerce has held that role for the last five years. But Duffy is leaving that position due to the amount of time he needs to devote to other commitments. The new chair is Tod Laursen, who is also acting president at SUNY Polytechnic Institute. 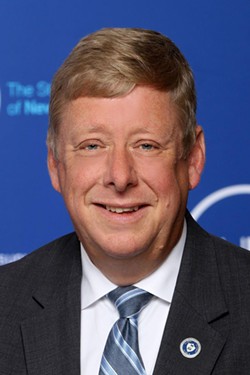 Photonics is a science that involves using light in applications traditionally addressed through electronics.

And Laursen said it still has excellent potential in Rochester, in terms of attracting more photonics-related businesses. But he said that it’s important to train the kind of workforce that will be needed locally to make that happen.

“Being able to actually make stuff and commoditize it is really important. And I think if you look at the Rochester activity in particular, that's really what it's centered around. So it's time will come and we really need to make sure that we're developing the workforce that will enable that growth,” Laursen explained.

Laursen said it’s important, “To make sure that we've got the educational programs in place and the opportunities for both youngsters who might want to enter this field, but also folks who might be looking to retool their careers or make a little bit of a shift. These are rather specialized technologies. And, and so making sure that we have the educational offerings to go along with this is really going to be key."

Laursen said that AIM Photonics hopes to hear soon from the federal government about how much additional funding will be available for the initiative over the next several years. He said there is the potential for more than $300 million in funding for the next seven years. That would include a combination of federal, state and private financing.

AIM Photonics is looking for a new CEO after Michael Cumbo left for a position with a private equity firm earlier this year.

AIM Photonics has a facility on Lake Avenue in Rochester which is used for research and development work as well as administration.