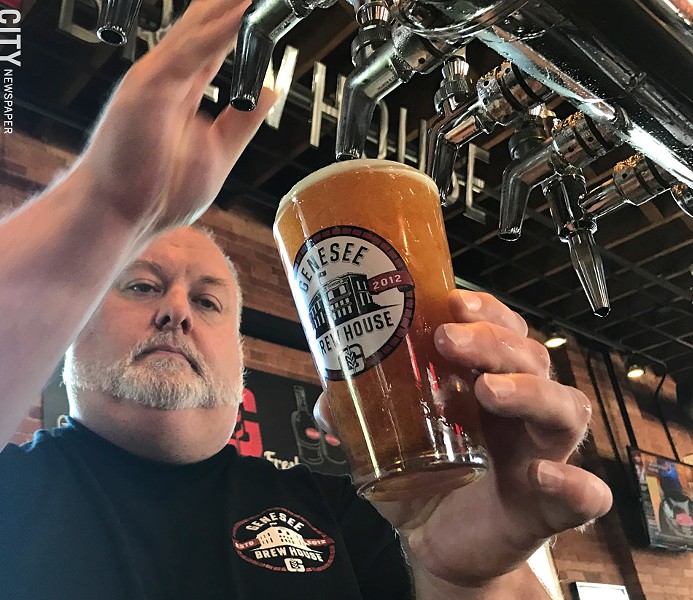 PHOTO BY RYAN WILLIAMSON Dean Jones pours a beer at the Genesee Brew House. Jones is a member of the 585 Brewers Collaborative, a group of 10 local breweries that recently released a popular India Pale Lager.

The idea for a Rochester brewery collaboration sprouted from evenings of communal beer drinking, says Dan Western, founder of The Lost Borough. He says the group exists thanks to Chris Spinelli, the founder and CEO of Roc Brewing. Spinelli sent an email to the local companies in an effort to get brewers together on their nights off. Whoever wanted take part was free to show up and just socialize.

"It's just a big group of beer nerds, getting together and doing what we do best: drinking beer and talking about beer," Western says.

The group of brewers, which expanded with each meeting, met at a different brewery once a month, and eventually, each member started to bring their own beers for everyone to sample. Their conversations were naturally collaborative, Western says, and the group began to solve brewing problems together.

During one of those meetings, Dean Jones, the brewmaster of Genesee Brew House's Pilot Batch System, suggested creating a collaborative beer with the breweries in their group.

While collaborative brewing isn't new in the beer community as a whole, it is new to Rochester, Jones says. "I thought it was something unique that we could get everybody together — seeing that we were already drinking together — and design a beer."

Despite Rochester's size, Western says, the breweries don't see one another as threats. "We don't look at it as competition as a whole," he says. "We really look at is as the beer community."

The 585 Brewers Collaborative, Western says, hopes to further improve the quality of Rochester's beer. The IPL, with its 5.85 percent alcohol and 58.5 IBUs, is a Rochester-centric product the collaborative is proud of.

Brewing an India Pale Lager, Spinelli says, allowed the breweries to mix their diversity into one batch. "Genesee's really known for lagers," he says. "The rest of us are really known for our IPAs, our hops, a little bit more new wave brewing."

The 585 Brewers Collaborative spent a day at Genesee brewing their group's 585-themed recipe. Jones provided the tank space, and everyone else brought hops and knowledge to contribute. "I had 10 bosses that day in the brewery," Jones recalls with a laugh. The yield of 10 beer experts in one room is a beer that's "crisp and clean," as Jones describes it, without the fruity ester characteristics of an IPA.

Twenty barrels of IPL were produced using the 585 Brewers Collaborative recipe. Of the 20 barrels, 10 were donated to Genesee's September Tap it Forward Festival, which benefits local charity. The other 10 barrels found homes at each of the 585 Collaborative breweries. The individual breweries then decided whether to sell their barrel on tap or donate it.

Western says the 10 gallons of 585 Brewers Collaborative IPL tapped at The Lost Borough sold in about two days.

The collaborative doesn't have definitive plans for its next step, but Jones says the group will continue working together — and drinking together. There is an idea to have each brewery work on their own, non-collaborative beer, and then brew a large batch of whichever drink gets the best feedback. That beer will then be released at next year's Flour City Brewers Festival under the 585 Brewers Collaborative name.

There doesn't seem to be a rush to make a decision, though. Spinelli says their main priority is having fun. "It's kind of taken on its own life and people really love it," he says. "So we're going to continue to develop it as we go."

Some cities, Spinelli says, are successful with brewery collaboration on a larger scale — like New York City; Portland, Oregon; and Asheville, North Carolina. But he says this particular city and this particular collaboration have their own unique take. There is a new wave of young professionals and young businesses working together and "really trying to come back and make something amazing happen."