September 20, 2018
Poet Edgar Allan Poe makes for a characteristically gloomy romantic hero in “The Spyglass Seven,” a gothic drama written and directed by Michael Seebold. The play imagines that the ghost of the writer (played by Dillon Herbig) has been resurrected by the spirit of Beauty to return from the grave for one night. It seems the muses have decided to spare him from his loneliness in death by allowing him the opportunity to find his one true soulmate before returning to his eternal slumber.

One by one Poe is visited by the ghosts of former lovers and friends (mostly important women from his past, though he also encounters one literary rival, Rufus Griswold), including his wife Virginia Clemm and his first love, Sarah Elmira Royster.

It’s an intriguing setup, well-performed by a talented cast that helps immerse the audience in the melancholy and often captivating world Michael Seebold has created. But as one acquaintance after another steps forward to plead their case, some sense of repetition sets in as Poe pushes each woman away in turn.

And I found myself wishing that his potential paramours were slightly more developed. For all the time we spend with the deceased women, we don’t get any real sense of their wants and needs beyond Poe. Having just been miraculously brought back from the dead, you’d think they’d have some larger questions on their mind, even for a moment. They’re all still infatuated with the author, and nearly all still ready and willing to jump his emo bones. Almost to a one, they’re each defined only by their attachment to Poe and a desire to remain with him in the afterlife.

That’s probably why I enjoyed Margaret Remboski’s performance as Poe’s once-fiance Sarah Helen Whitman most of all. After being dismissed by Poe, we later return to her and find that the morbid Whitman has decided she rather likes being a ghost (“I’m now the apparition I so longed to see in life!”), and is determined to elude Beauty’s attempts to send her back where she came from. Her sudden enthusiasm for death brings a much needed spark of life to this mournful tale.

“The Spyglass Seven” will be performed again on Saturday, September 22, at 1 p.m. at the School of the Arts Black Box Theatre. $10. Appropriate for all ages. 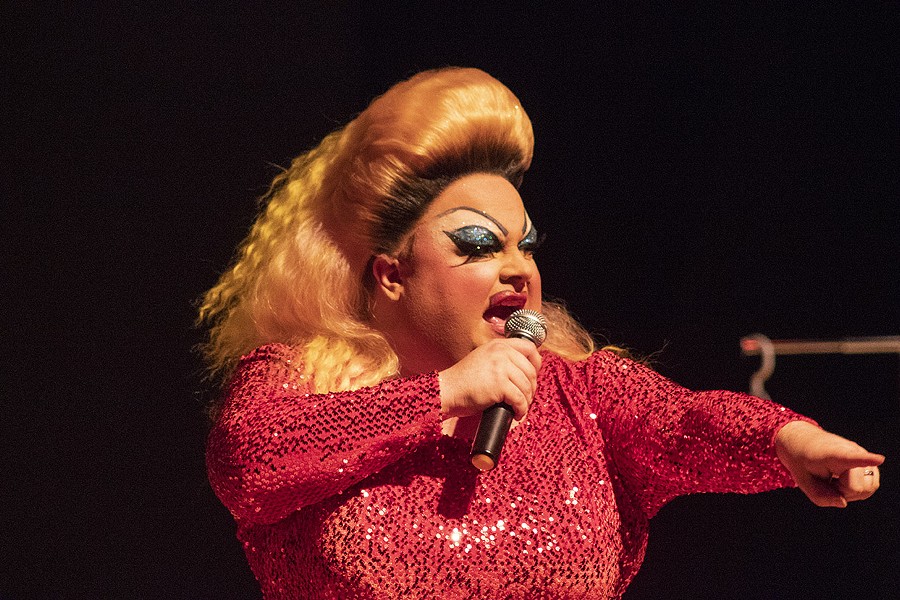 Ginger Minj dons the icon’s trademark sky-high brow and snarl to deliver a monologue that encapsulates on the life of Divine (born Harris Glenn Milstead), from his first time in drag to his premature death, on the cusp of mainstream stardom. Ginger also speaks of the impact Divine had on her own career and the way he inspired her to dream bigger than she ever thought possible. Her heartfelt words are interspersed with video archival interviews and clips of Divine’s most notable performances. But the highlight of the show are Ginger’s rollicking performances of Divine’s original disco music, backed by a live band. I suppose the highest compliment I can give the show is that — much like the career it seeks to honor — by the time it started coming to an end, I wasn’t ready for it to be over.