Adam reviews ‘The Seal Maiden’ and ‘The Topher Holt Experience’

September 17, 2017
With the sheer number of options available to audiences each day at the Rochester Fringe Festival, the only way to get the most out of the experience is to make sure you take in as wide a variety of shows as possible. And with that in mind, I spent my Sunday taking in a bit of wholesome, family-friendly entertainment.

First up was the “The Seal Maiden” at the School of the Arts. Produced by WallByrd Theatre Co. and Present Tense Dance, the production is a Celtic fable about a young seal named Solanna (Ella Smith) who becomes stranded on the beach, is transformed into a selkie (a seal-woman in effect), and attempts to live in the human world but still longs for the sea.

It’s a sweetly melancholy tale, told through music and dance with a wonderfully enchanting simplicity. A narrator (Mary Krickmire) provides the exposition, though the heart of the story comes from the lilting Irish melodies of Karan Casey and Niall Vallely. The songs are lovely, and impressively performed by Smith and the rest of the wonderful ensemble.

The production’s evocative costuming and scenic design by Vicki Duval and Linda Starkweather are particular highlights. I loved the use of hooded cloaks to suggest a seal-like shape when worn by the human actors, and an entire menagerie of sea creatures is brought to life with similar inventiveness and creativity. Another nice touch is a large, billowing blue cloth at the front of the stage that’s used periodically to suggest the rising waves of the ocean. Filled to the brim with delightful details, “The Seal Maiden” ended up being my most pleasant surprise of the Fringe so far.

“The Seal Maiden” will be performed again Saturday, September 23, 2:30 p.m. at SOTA's Allen Main Stage Theatre. $12. Appropriate for all ages. 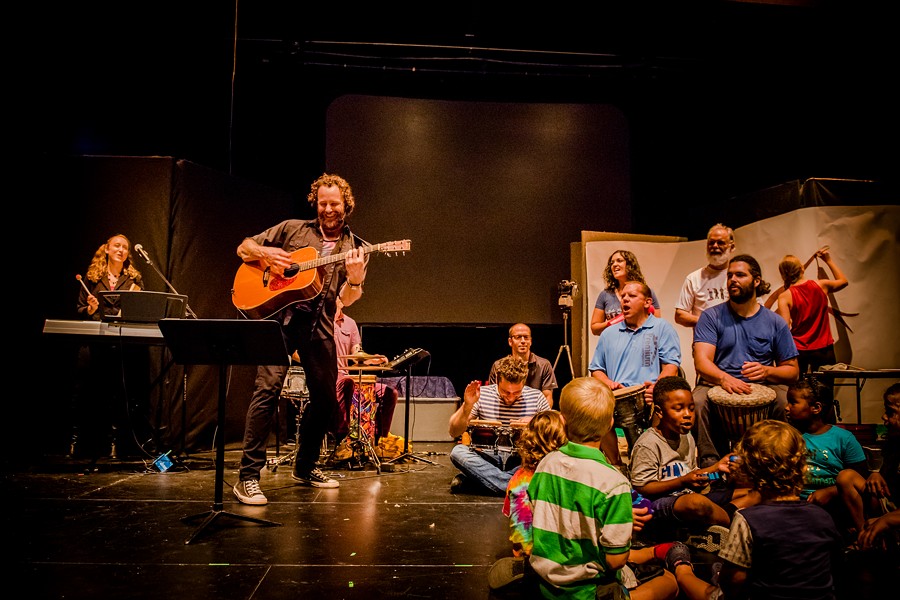 Later on in the afternoon, I returned to SOTA’s Black Box Theatre for “The Topher Holt Experience.” A former principal company member of PUSH Physical Theatre, Holt performs a collection of original songs on guitar, with his two-person band providing accompanying vocals, keyboard, and drums. Holt also brings up a few audience recruits — both parents and children — to give some additional percussive support.

The kid-heavy audience went wild for the interactive elements of the performance: bouncing balloons and beach balls, drum circle, and a painted mural that gradually takes shape throughout the performance.

With a sold-out crowd, the audience skewed even younger than I anticipated. Truth be told, with so many tiny children, I felt a little awkward being the only adult male there on my own. But I ended up having a pretty good time. If you’re willing to give yourself over, the show provides plenty of enjoyment for both the young and the young at heart.

“The Topher Holt Experience” performs again on Saturday, September 23, at 2:30 p.m., in SOTA's Black Box Theatre. $8. Appropriate for all ages.